Most of my favorite musical acts are Serious Artists who come out with Concept Albums (Arcade Fire) or Rock Operas (The Who), who tackle serious issues (U2, Sting) and write deeply intelligent, complex lyrics (Elvis Costello), who explore deep emotion (Alanis Morissette, Tori Amos) or at least serious anger (Nirvana).

But my very favorite band, Queen, does none of that (or least, not very much). Though a bunch of seriously intelligent guys, they chose to write about love and lust and bicycle races and seasides and “having a good time, having a good time.”

So it’s fitting that their live show is basically an over-the-top, entertaining, fun fest.

Complete with lasers and disco balls.

“I didn’t know you were a fan of Adam Lambert” — someone at work, to me

So let me ask you. What do you think about the new guy? — Brian May, to Toronto crowd

I thought Adam Lambert was great. I’m not that surprised that I did, though. I first saw him perform with Queen on this iHeartRadio YouTube concert, and I was seriously impressed. Sunday night, he did not disappoint.

No, he doesn’t sound like Freddie. So he wisely doesn’t sing the songs as Freddie did. With May and Taylor (and Spike Edney, long-time tour keyboardist) providing the musical backbone, they’re recognizably the Queen songs we all know and love, but he gives them his own phrasing and pitch and emphasis. For example, even when he does a Freddie-like call and response, he doesn’t play on day-o sounds as Freddie did. Instead he gives an increasingly a funky play on the “need your loving” line from “Tie Your Mother Down”.

It was a variations on a theme like that, all night.

And doesn’t hurt that the boy’s voice is truly amazing in its own right. “Show Must Go On” is supposed to be his major showcase, and I have no complaints about his singing on that, but I was particularly blown away by his take on the gorgeous “Who Wants to Live Forever?” And unlike the old coots I usually go see, he’s only 31. He could and did confidently hit and hold every note he went for.

I also didn’t mind that he’s gorgeous, and that he changed his costume five times during the show. I think my favorite was this one, with the Daltry-esque fringes:

If one thing did surprise me, it was just how camp his performance was. Note the chaise lounge above, used during the performance of “Killer Queen”. He spent most of the song reclining on that, batting his eyes, and even fanning himself. It was hilarious and fantastic and so gay.

(I wondered briefly if this is more how Freddie would have performed had not felt inclined to be discrete about his personal life. Then I realized that was a stupid thing to think about man who wore ballet tights as a stage costume, and refused to shave his “gay” mustache no matter how many razors fans threw on-stage. Freddie clearly performed exactly how he wanted to perform.)

Edited to add this amazing video of “Somebody to Love” from this concert, by someone with way better seats than me.

Tell me you don’t love Adam Lambert after watching this…

The first part of the show definitely highlighted Lambert and Brian May, as they of course are down front and can play off each other and run down the ramps whose design confused us at first, but when lit revealed themselves to be a giant Q.

The top of the Q is cut off here, but hopefully you get the idea

But the other original member of Queen on hand was, of course, drummer Roger Taylor. Roger is not one of the rare, flashy drummers (like Tommy Lee or Keith Moon) who draw your attention away from the musicians in front of him.

However, he’s also more than just the drummer. He wrote many of Queen’s best songs and biggest hits. He sang all the highest notes in those layered harmonies, and often took lead vocal duties as well. His solo oeuvre is the best of any of the band members, and on those albums, he plays guitar. He also bore the burden of being the best-looking member of Queen.

So I was pleased that that Roger also got some time in the spotlight, heading down front to play tambourine when Brian sang “39”, then taking his own lead vocal on “Days of Our Lives”, sung over a backdrop of Queen photos and videos from the past. Then back on drum kit (miraculously moved out front) he took over the David Bowie part of “Under Pressure” while Adam Lambert did Freddie’s. (And Adam’s correct; I’ve always been impressed at Roger’s ability to drum and sing.)

The drum parts during Roger’s solo turns were covered by his son Rufus, who can now compete with Adam for “best-looking member of Queen”. Father and son also did a bit of drum-off, revealing that Roger had passed along musical skill along with the blonde hair. 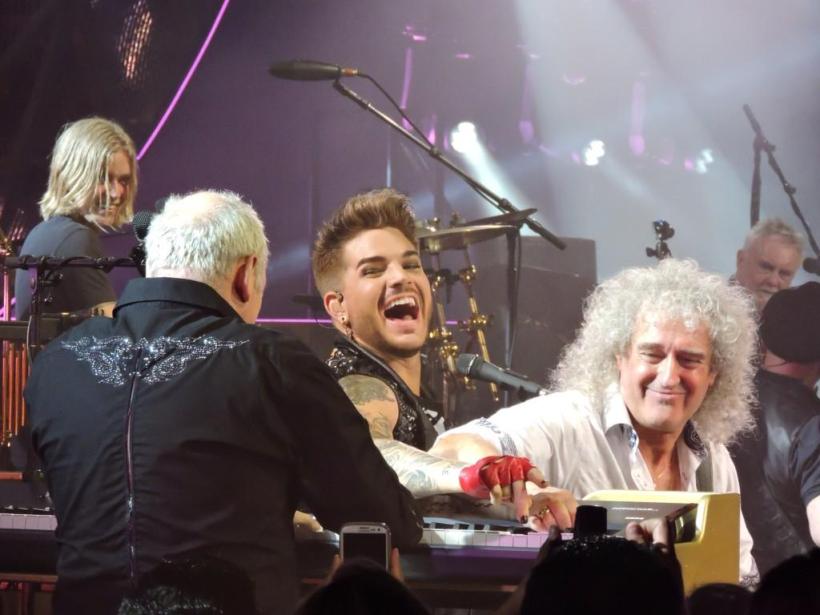 Rufus (left) may need a haircut to *really* compete with Adam on looks… Photo by @Glam4Mama, from New York show

I don’t like to go on too long on drum solos. I don’t want the audience to get bored.

It never seems to bother Brian, though. —Roger Taylor, on Brian (Not to the Toronto crowd)

Brian May definitely seemed to have the greatest affection from the crowd, though. He earned a standing ovation merely for walking to the front of the stage to introduce the more acoustic part of the evening, the “Love of My Life” singalong. I became rather choked up during that part, I must admit, which surprised me, especially as it occurred well before Freddie appeared on the big monitor to sing the final verse.

But Mr. Brian May also teared up during that last part of the song, so I was in good company.

Brian then went on to explain the astrophysics behind 39 (he does have a doctorate in physics, after all), commenting, “I used to think it would be a great idea to go and explore other planets. Now I’m not so sure, since we’ve fucked up this one so badly.” And that anger also surprised, though it probably shouldn’t either, given that I follow him on Twitter…

And a little later in the evening, he indeed did a long guitar solo.

Now, thank God the effects during that thing were really pretty incredible. The photo below is just a tiny taste; they used the screens and the lighting and the lasers and that was pretty riveting.

Unlike the solo, which was just too long, at least for me (and every Toronto critic I read, though they didn’t agree on much else). Of course, I still joined the standing ovation after, but that was just to maintain my sight lines. Really, I was thinking, “Don’t! You’ll just encourage him!”

I think this every time I see a Queen-related show: Man, they’ve had a lot of hits. But they fortunately do include some less well-known numbers also, like “Stone Cold Crazy” (made more famous by Metallica than Queen), “Lap of the Gods,” and “Love Kills”, which is actually a Freddie solo track that the band will be re-releasing with new instrumental backing.

The song I was happiest to hear was “I Want It All”, not only because I love it, but also because it was made for the stage, and is one they were unfortunately never able to perform with Freddie, as he was too ill at that point.

The song I was most surprised to enjoy was “Fat Bottomed Girls”, because I don’t love it, normally, but damn it was so much fun live!

That’s amazing, right? And it still leaves out so many great songs (Keep Yourself Alive, You’re My Best Friend, I Want to Break Free, One Vision, A Kind of Magic, Dragon Attack…)

Someone still loves you

This press said this show was sold out, and certainly the Air Canada Centre looked very full. (Though the two people next to us didn’t show up, so we had extra elbow room!)

And it was lovely to be in a room full of Queen fans. This was a first for me.

I’ve been to a lot of Queen tribute-y things, but the people there never seem to know anything beyond the chorus of We Will Rock You.

This crowd knew the verses to We Will Rock You. And all the lyrics to “Love of My Life” and “39”, which were never singles. And they knew exactly how to clap during “Radio Gaga”. And when their matches (or cell phones) needed to “still light up the sky”.

And unlike the Globe and Mail reporter who reviewed this show, I’m sure they knew that Queen always just leaves the stags plays the video during the operatic part of “Bohemian Rhapsody”. That it wasn’t just getting excessive on the Freddie tribute.

Of course, that video Freddie and live Adam traded off the final lines of “Bohemian Rhapsody” was a new addition, but who can complain of that? It was lovely. (And made for only the third Freddie appearance all evening. Hardly excessive.)

“It wasn’t bad. The light show was really good!” 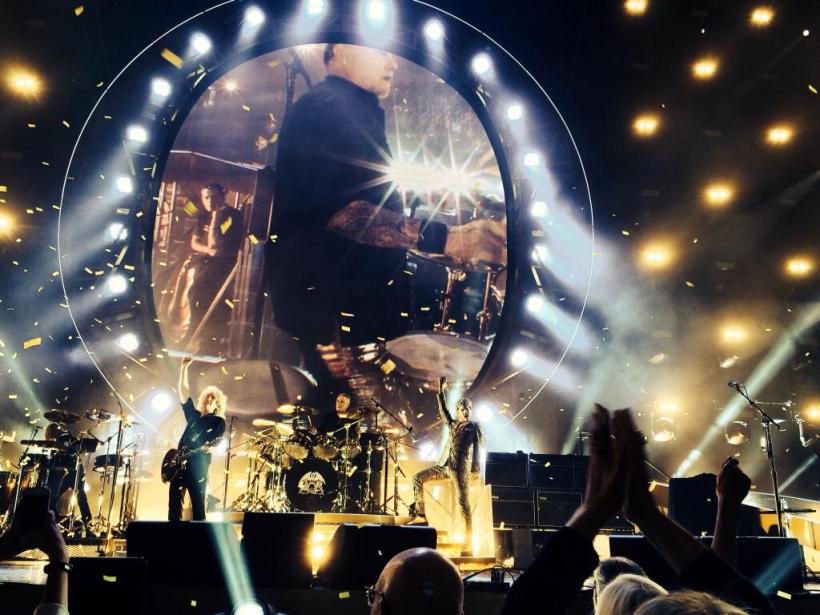