Tuesday morning. It’s cold. It’s raining. The museum lineup has slowed to a crawl, as groups of school children gained entry ahead of us. Jean has lapsed into a grumpy silence. My mood is darkening accordingly.

Why visit Berlin? Well, weird as it seems, it really was a vacation built around an Adam Lambert concert. We’d been thinking of heading back to Europe in the spring anyway. He was touring there then; I’d been wanting to see Lambert in concert for a while. So we used his tour itinerary for vacation planning.

Amsterdam had been the likely prospect, but the date wasn’t ideal—a bit early in April, and conflicting with a local show we had tickets to. Then more dates were added. “Hey look,” I told Jean. “He’s playing Berlin.”

“Well, I’ve always wanted to visit Berlin,” Jean said as he hurried off to work.

That afternoon I emailed him. “I bought Adam Lambert concert tickets!

And five months later, we were off.

For whatever reason, I did a lot of fretting before this vacation. At various times, I worried about:

I could continue on this vein for a while. Will we get good seats on the plane? Have I done enough Berlin research? Should I get the Museumcard or the Citypass or the Berlinpass? Should I be booking a Parliament tour ahead of time? You get the idea.

Still, up to that Tuesday morning, it really seemed all that worrying had been silly. The flight over—and I never say this about transatlantic flights—seemed to go by really fast. Jet lag makes everything a bit challenging the first day, but we still managed to get our transit pass, then (eventually) find the bus to the train station, from where we (rather easily) found our hotel.

And our hotel was nicer than I had been expecting, and in our slightly sleepy state, we agreed to a room upgrade. I don’t know quite what the difference was, but if that’s why we got such a big bathroom counter, that was appreciated. (I don’t travel light in terms of cosmetics.) And the bed was quite comfortable.

It was a nice day, so after wrestling our wireless device into submission (after a shaky start, it ultimately worked really well for us), we got out into the city a bit. Our first Berlin meal, at a random but very busy pub across from a popular market, was delicious: Gorgonzola and spinach ravioli for me; Hungarian goulash for Jean. We saw the Berlin Wall remnants, with plans to go back for a proper visit, and that night had an incredibly long, restorative sleep. 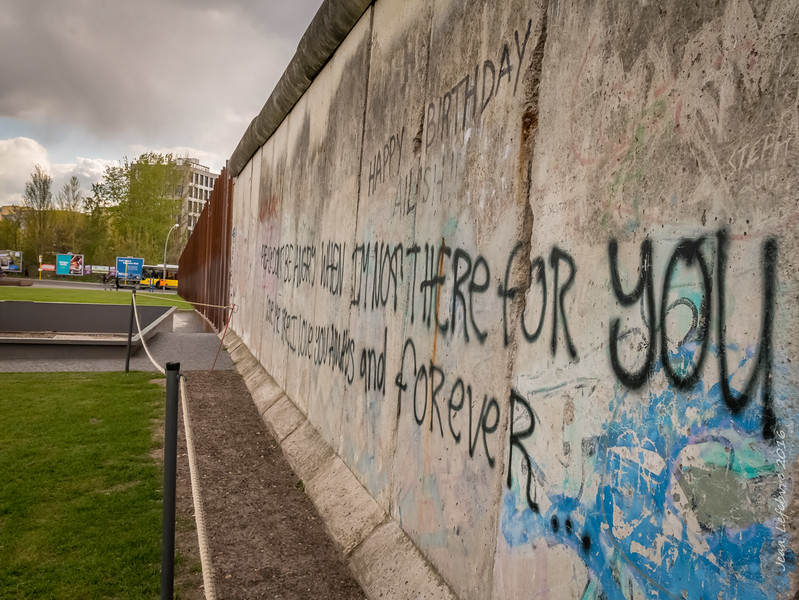 What’s left of “The Wall”

So I think the troubles started Monday. But not dramatically so. Yes, we tried booking some sites online, and just ended up confused, which wasn’t a great start to a day. And yes, many museums were closed that day.

But it was also nice and sunny out, so a good day to visit several outdoor sites, which we did. We saw:

All of which I found at least somewhat interesting, and some fascinating. And I’ll be writing more about them later.

But the problem for Jean—along with the fact that was a rather depressing series of historical events we were revisiting this day—was that he didn’t find much of this picture-worthy. And taking photos is a big part of what he enjoys doing on vacation. 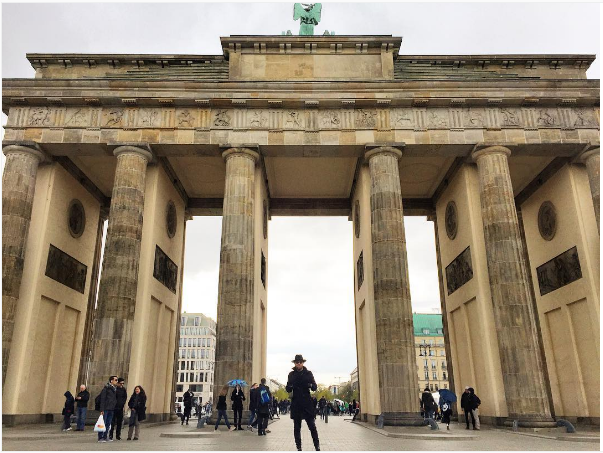 As Jean didn’t take a picture of the Bradenburg Gate, here’s one by Terrance Spencer, a member of Adam Lambert’s band, taken the week we were there. Source: https://www.instagram.com/p/BEv9FomIMmB/?taken-by=terrancespencer&hl=en

It also didn’t help that our second Berlin dinner wasn’t as successful as the first. Having failed to get into the Italian restaurant we were aiming for, the alternative we selected was just so-so. (Though I think the lamb I had was better than Jean’s chicken.)

So Tuesday’s mediocre breakfast, rainy morning, and 45-minute wait to get into a museum did nothing improve to the situation.

Fortunately, when we got into the Pergamon, we found that it actually was a pretty darn good museum, with picture-worthy exhibits! I was quite relieved to finally see Jean pull out his camera and start snapping away. And the companion museum we visited in the afternoon—no lineup here—was even better: the Neues Museum. 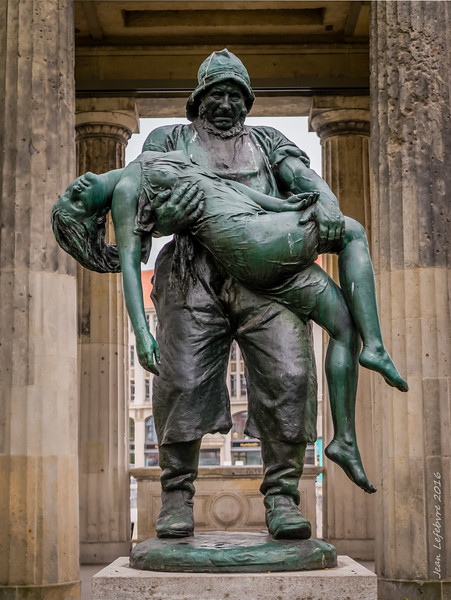 One of the statues on “Museum Island”, where both the Pergamon and Neues Museums are located

And then the day cleared up, weather-wise. And that night we did get ourselves into that Italian restaurant we’d aimed for on Monday, and we had a wonderful meal there, with great wine.

However, it’s just a fact that Berlin is a less photographer-friendly city than many we’ve visited, given how much was destroyed in the wars and how much is currently under construction, So it just wasn’t destined to be Jean’s favourite. But he stopped letting that affect his mood, and for the rest of the vacation was his usual cheery self and generally great travel partner.

Meanwhile I was perfectly happy just stuffing historical and archaeological facts into my head (though I think many of them have just spilled back out…), and envisioning past times so very different from the vibrant and free city in front of me now.

And the week went by really fast… 🙂