Given its persistence in my thoughts, apparently I need to write something about the strange goings-on in Ontario politics.

To catch up people living elsewhere:

The Ontario Liberal Party is currently in power. It has formed the government since 2003—15 years. The official opposition is the Progressive Conservative (PC) party.

There is a provincial election in June.

With the Liberals, and leader Katherine Wynne, having persistently low approval ratings, the PCs appeared poised to win that election.

It was all kind of routine and dull. Which isn’t necessarily a bad thing.

But then the PCs decided to make it interesting

About four weeks ago, PC leader Patrick Brown was accused of sexual misconduct; specifically, of initiating intimate activity with women who were much younger (though of legal age), while they were inebriated. One of them worked for him.

Brown denied the accusations and vowed to stay on as PC leader. He was convinced to step aside by his staff, who resigned en massed, and by the rest of the PC caucus, who went on to elect Vic Fedeli as interim leader.

Fedeli then discovered serious problems within the PC party itself, including a sexual assault allegation against the president of the party and bogus membership numbers. There were more resignations.

The new PC party officers decided to have a quickie leadership convention, with a winner to be declared on March 10. Four candidates entered the race, include Doug Ford, brother of former Toronto mayor Rob Ford (gah!), and a woman (Tanya Granic Allen) who thinks children shouldn’t be learning anything about sex in school. (She was just endorsed by a white nationalist organization. That’s nice.)

Satirical take on Doug Ford’s leadership announcement. But he really did announce it in his mother’s basement, and he did used to be a drug dealer

And then last week, Patrick Brown came out swinging. He defended himself against the sexual misconduct allegations (including, in part, through statements from his girlfriend, 17 years his junior, whom he started dating when she was his intern. Umm…). He launched a defamation suit.

Oh, and he applied to be PC leader again, and has been allowed to run.

And then they blew up their platform

That Patrick Brown won the PC leadership in the first place was a surprise. He had been undistinguished backbench MP in Stephen Harper’s Conservative government. But he won by getting a lot people to sign up as new members of the party to vote for him.

He ran for the leadership as being at least sympathetic to social conservative views, but as the election, he and his team gauged that to win Ontario, you had to be a bit more centrist. They came out with a platform to mostly… Keep doing what the Liberals had been doing. The only “radical” element was getting rid of the Liberal’s cap and trade system for carbon pricing, and instead adopt the federal Liberal’s carbon tax plan. They would use the greater revenues from that to reduce income taxes.

But one by one, all the PC leadership candidates have declared they will not support carbon taxes. And they are going to get rid of cap and trade, too. in Maclean’s, Mike Moffat outlines how Scrapping carbon taxes leaves a gaping hole in the Ontario PC platform. To not run a deficit, they’d have to cut spending by $16 billion instead of the originally planned $6 billion. And they simply won’t have any way to cut greenhouse emissions. Ontario just won’t. 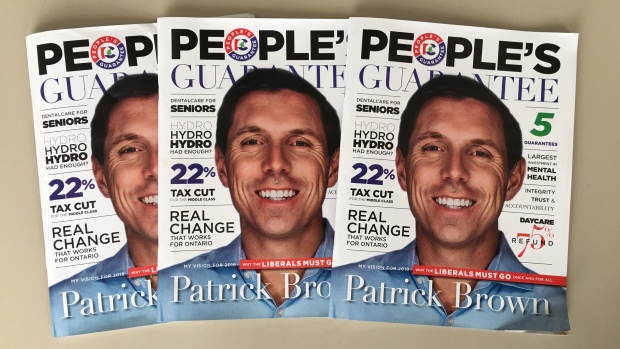 So much for that….

Except, as National Post’s Andrew Coyne has pointed out, A carbon tax is coming, no matter what the PC candidates say. Because if they do cancel cap and trade, then the Federal Liberal government says they are going to impose a carbon tax on Ontario (and give the revenues back to the province). While it’s always possible the Federal government will backtrack on that plan, none of the PC candidates can personally make that happen. Whining alone will not do it.

And that’s one of the reasons Patrick Brown stepped back into the race, he says: To defend his platform. For the record, I do not believe his motivations are noble; I think he’s just very ambitious and really wants to be Premier. But he’s not wrong in saying that the policy void of the rest of the candidates is irresponsible.

Problem is, responsible policies will not win you the PC party leadership. Compared with the general population, the PC membership has a much higher percentage of people who hate carbon taxes in a deep, passionate, and irrational way, and cannot be convinced to accept them as policy, no matter (for example) how big an income tax cut you offer in return. Saying what you need to say to get past the members in March, then pivoting to become mainstream enough to win in June, is going to be a challenge for whoever wins this.

Which proves that having a tiny minority of the population with special interests select party leaders is ridiculous. Elected members of the party caucus should be the one to decide who leads them. Member vote has been the practice long time in Canada; there’s no real momentum to change that now. But if that time ever comes, this will be a textbook case as to why it’s needed.

So do the Liberals win again?

I’m not going to make that prediction. If nothing else, the PCs are gaining a ton more attention than they managed with Patrick Brown as uncharismatic leader, and the Liberals remain stubbornly unpopular. (That people say they actually dislike Katherine Wynne as a person is a puzzle to me, by the way. To me, she comes across very well, as knowledgeable, compassionate, and well-spoken. But maybe people are just tarring her with whatever Liberal policies they’re angry about.) 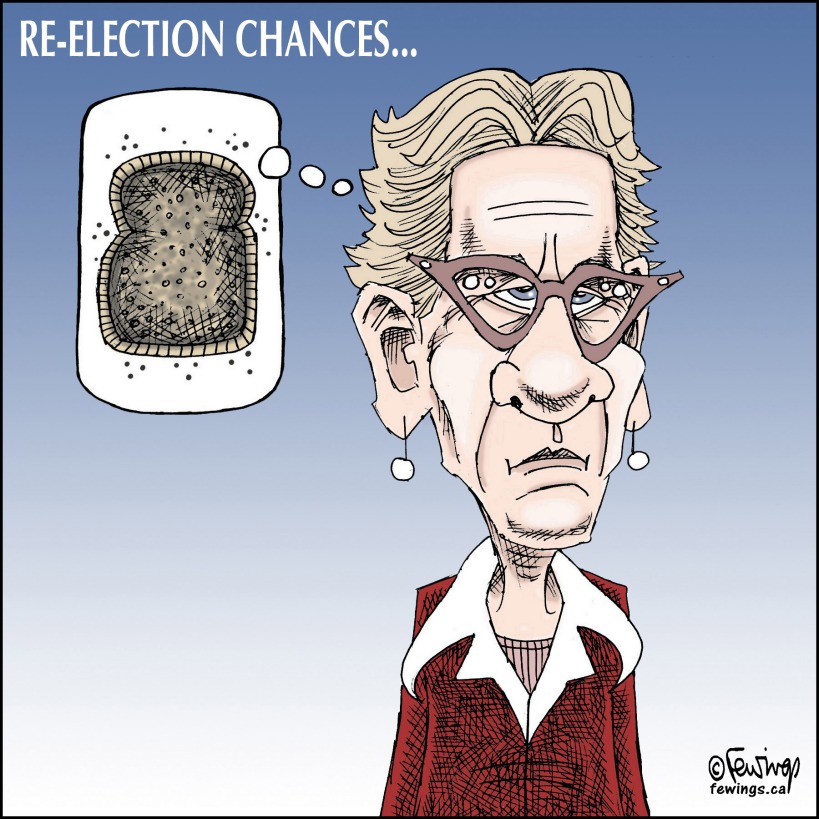 Which seems to be mostly increased hydro rates? Although those date back to some bad contracts that previous Liberal premier Dalton McGuinty got us into, and that no party can get us out of. But the Wynne government has made some of their own bad decisions (along with some good ones, it has to be said): I’m not convinced that selling Hydro One was such a great idea. I’m not a fan of their LCBO-style plan for selling marijuana. Back-tracking on their promise to Toronto mayor John Tory in implementing tolls on the DVP and Gardiner was unconscionable. As is the amount of money they spend trying to get us to gamble more, online.

Overall, I think they could use a little time out here.

But I can’t see voting for that gong show of a PC party, either.

Our last hope? No, there is another

Ontario actually has a third party with seats in the legislature: The NDP.

Even before all this, I was leaning toward voting NDP. My MPP, Catherine Fife, is from that party and is a very good representative. She deserves to be returned to Queen’s Park.

Could be a few reason for that, including having less money than the other parties, but they also seem notably light on the policy front. (Though what they have, on pharmacare and Hydro, seems sensible.) Maybe they should take a page from the Liberals, who have been known to crib from the NDP, and borrow some from other parties. 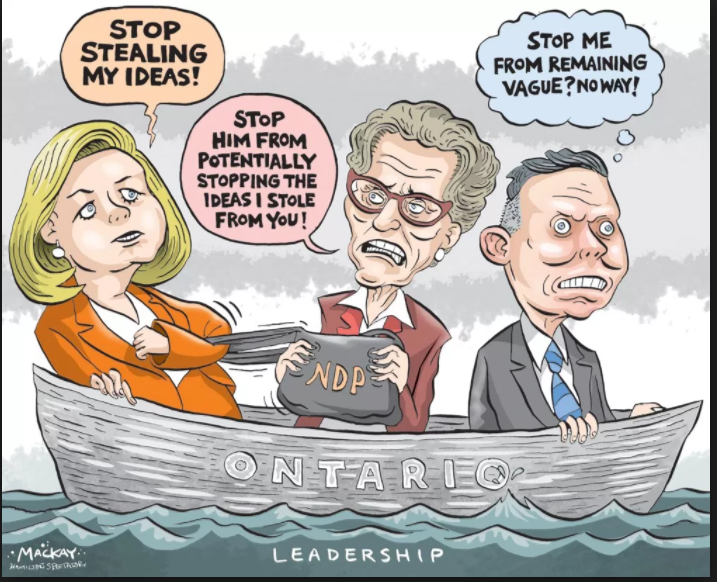 Horwath, Wynne, and Brown (this is an older cartoon….)

Like, the Ontario Green Party has some excellent policies, such as having small business dispensaries sell marijuana instead a government monopoly.  (Also, Ontarians should consider voting Green, at least anywhere they stand some chance, like in Guelph.)

And / or, how about if the NPD gets rid of cap and trade, happily accepts the Federal government carbon tax, and gives everyone an income tax cut?

For one thing, it would be hilarious to see them debate the PC leader on that. And the NDP isn’t going to get any of the “I hate carbon taxes” vote, anyway. They could even put an NDP spin on it, and make sure all low-income people got a carbon tax credit.

Look, it’s a long shot, it definitely is. But the past four weeks have shown that nothing in Ontario politics is as predictable as we’d thought.