The impetus for our trip earlier in August was my Grade 13 high school reunion. Upon hearing I was going to that, people had some funny reactions.

Which I just found confusing. Nervous about… What, exactly? It’s not like I had to give a speech, or hang-glide, or compete in a test of skill. It was just go there, meet people, eat, drink.

But I now realize this is a by-product of the high school reunion being such a popular culture trope, the occasion where dramatic things happen: Where old hurts are avenged. Where one attempts to hide what you’ve actually become (Romey and Michelle’s High School Reunion; that episode of Taxi where Louis has Bobby pretend to be him). Or, where one attempts to show you’re no longer that loser you were in high school (as Liz did fairly recently on 30 Rock).  Or where old romances are rekindled. Or time travel occurs (Peggy Sue Got Married).

For the record, if there was any avenging /deception /bragging /romancing / time travelling going on that weekend, I wasn’t involved.

“Why would you want to see those people again?”

How about this: I’m not on Facebook. So, I was kind of curious how people turned out. High school wasn’t altogether wonderful, but Grade 13 was definitely the best year. A smaller, closer group of people that I was curious about.

I have to think it will be so different for the Facebook generation (which is spreading to every age group, really). With virtual reunions going on continually, how necessary will actual ones be?

I was quite impressed with the organization of the whole event by the small committee who took it on. One thing they did was put together a spreadsheet of contact information, from which I could glean the following:

Remaining numbers are just for those in attendance, plus 4 who provided info via email after—bold for the group I’m in: 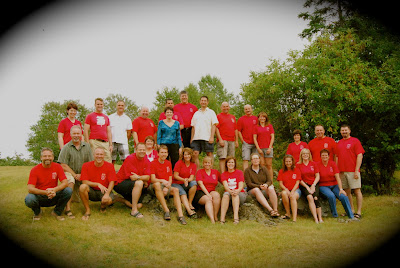 My brother said that people at a high school reunion looked like the same, only with “swelling”. Funny, but not totally true. Sure, there was some swelling, but some seemed to have lost weight since high school, and many looked to be about the same size as then.

And at any rate, it was hair that really made the difference. The only people I had trouble recognizing were those with much less hair, different colored hair, or more facial hair.  This resulted in a number of conversations with people who clearly knew me, who I also felt I recognized, but couldn’t quite pinpoint—until partway through the conversion (and after the welcoming hug). Very strange feeling.

Did other schools do this?

Other parts of the excellent organization included:

Which led me to wondering, did other schools do those things? Did everyone in Grade 13 get a special room to hang out in? Did everyone put on a Soirée des Treize?

Working on the talent night is something I definitely remember. I believe the purpose was to raise money for our Grad celebration. I wrote a sketch for it that actually proved controversial. It was an ad for a 20-minute workout featuring celebrities. They were fine with the Queen (me) leading everyone in a royal wave, and even with Mick Jagger demonstrating some vigorous pelvic thrusting (well, it was a French school). But the Pope having everyone bend down and kiss the ground? A little dodgy for a school full of Catholics. And Pierre Trudeau giving everyone the finger? Turns out that means the same thing in French as in English.

I think in the end we got to keep the Pope (even though the enthusiastic performer was practically French-kissing the microphone in his performance of the move), but had to substitute in a smoking René Levesque for the swearing PET. (Interestingly, the cigarette in the hands of high school students was not considered the least bit controversial then.)

A lot of the old gang was there, the same but different.

MJD, still sweet and pretty and fun, but also now a well-loved family doctor whose move from Timmins to Ottawa made it into a nation-wide story on the CBC.

IC, still fun and funny and outspoken, but also abandoned a law career for some volunteer work in the third world, and then his own contracting business. An interesting person, then and now.

FLB, the old boyfriend, as gorgeous now as he was then, but having dismissed thoughts of the priesthood (!) and acquired three university degrees, now settled into a long-term marriage with four kids, and long-time employment with the same high-tech company.

With these and others, it was funny how easily we fell back into the groove (and the old crowds, in large part). One of the teachers there recalled our year as a “special” one—and I think that was meant in a good way. I believe it could be true.

One thought on “Anatomy of a high school reunion”