I bought Wonderful Tonight, Pattie Boyd.s autobiography, very much on a whim, from a used bookstore. I was just curious about the woman who married George Harrison (of The Beatles), inspiring him to write “Something”, then left him for Eric Clapton, after he was inspired by her to write “Layla”. That George and Eric remained friends through all this was just one of the things that seemed odd. 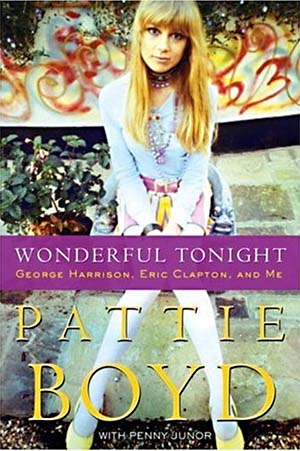 When you hear that Pattie Boyd was a model when she met George Harrison, that gives you the impression (based on today) that she was already leading a glamorous life, but modeling wasn’t the same back then. She talks of having to do her own makeup and hair, and running around to various appointments on public transit. She enjoyed it, but it didn’t make her especially rich or famous.

Her childhood was even more austere. She grew up in Kenya, her father a damaged, injured war veteran who eventually abandoned the family. Her mother then remarried to an abusive, unfaithful man. Pattie and her siblings were shuffled off to boarding schools, and eventually were literally abandoned, left in Kenya while her parents moved to England.

Hence, the lack of life model for what a good marriage is.

Because, in case you were wondering, this book gave me the impression that it wasn’t much fun being married to rock stars.

Of course, the relationships started out well. With George, the biggest problem in the early days were the insane Beatles fans. But over time, as The Beatles dissolved, their relationship grew more rocky as well. I found myself rather disappointed to find out that George cheated on Pattie constantly. Yes, I know he’s a rock star, but this is after The Beatles stopped touring, and after George has taken up religion and meditation and is trying to be this very spiritual person.

And one of the people he had an affair with was Maureen Star, Ringo’s wife! I mean, seriously dude, that’s just not right.

But it wasn’t just the infidelity that challenged the relationship, but also George’s mood swings and self-absorption and disregard for what made Pattie happy, such as being able to cook for him.

So yes, she was susceptible when Eric Clapton took an interest, and starting writing her passionate love letters—and one really great song. But it was a long, slow build-up before she was finally ready to leave George. At one of these junctures, Eric threatened to take heroin if she didn’t leave with him then. She didn’t, and he did.

Though she’s discreet in terms of details, it’s clear that the Pattie / Eric relationship was a very passionate one once it ignited. If “Layla” was a kind of foreplay for them, “Wonderful Tonight”—which I hadn’t realized was also inspired by her—is indicative of their happy early days together.

But it doesn’t last. Though I think he was off heroin by this point (?), Eric was still an alcoholic. And a slob. And unfaithful. And self-absorbed. Though here I’m making it sound as if Pattie does nothing but complain about her husbands, which isn’t the case. She’s pretty fair. I think I’m the judgmental one.

Pattie also tackles subjects like her infertility (she has no children, despite attempts at in vitro), her failed attempts to help her drug-addicted younger sister, and the challenges of building a life as an ex-wife who didn’t necessarily get a big financial settlements from her rich ex-husbands. Throughout, the writing style is very conversational. I suspect that, in fact, it was actually written by named coauthor Penny Junor, based on interviews with Pattie.

You also, inevitably, get a bit of rock history from an unusual perspective: the Beatles trip to India, drug busts, Live Aid, the murder of John Lennon. She was also friends with members of the Rolling Stones, The Who, Queen, Rod Stewart, and others; her sister has long-term relationship with Mick Fleetwood.

I wouldn’t say this is a book of general interest, but for for those wondering about the lives of rock stars, it certainly provides some insight.