It seems apropos to begin with Wild, the movie starring Reese Witherspoon, that we recently saw at the theatre. I was quite looking forward to it, as I’ve really enjoyed every other movie Jean-Marc Vallée has made. I also thought the rugged, outdoors-y story would appeal to Jean.

Wild is the story of Cheryl Strayed, who decides to solo hike the Pacific Coast Trail, which is over 1000 miles long and doesn’t have a lot of “comfort stations.” As her overly full backpack attests, she doesn’t have any experience with this type of trip. As she slogs along, she flashes back to the memories of her past that have led her to this point.

So it’s not inherently the most cinematic movie. The writer, director, and actors deserve credit for making it as compelling as it is.

Cheryl Strayed was kind of wild. Depressed after her mother dies of cancer, she spirals… drops out of schools, engages in casual sex, drinks, experiments with heroin. She does the hike as a kind of act of atonement. Instead she learns that maybe she has nothing to atone for.

The Affair, an HBO Canada (Showtime in the US) series that we finished watching over Christmas, presents another woman for whom a tragic death leads to “bad” behavior—notably, an affair. The conceit of the series is that each episode is show from two points of view: His (Noah’s) and hers (Alison’s). What’s interesting is how differently each of them recalls the same events. With this series, you can never be sure what the truth is.

Underpinning the story of the affair is a murky murder investigation: For the longest time, we’re not even sure who’s dead. But particularly at the start of the series, it’s the personalities and relationships that are of interest, anyway.

Watching this with Jean was added entertainment, as he’d get so frustrated with the characters and situation at times, he’d have to get up and pace to work off the tension. At one point he commented, “I don’t know why she’s so much more sympathetic than he is.” But she is. It’s sad but understandable that the strain of tragedy has damaged the relationship with her husband. Noah, on the other hand, seems to be undergoing a petulant midlife crisis, with his wife and four children as the victims.

It seems like the kind of series in which everything would get wrapped up at the end of the season, but not so much. This is TV, they wanted a season 2, so it ends in a kind of cliffhanger. That’s worrisome, as I don’t see this necessarily continuing to work well for another 10 episodes.

Jane the Virgin, on the other hand—which we started watching on Shomi about a month ago and have nearly finished already—has enough plot and characters to run for years, probably. Central character Jane is, indeed, a virgin. In a bid to avoid becoming a teenage mom like her own mother, she has vowed to wait until marriage.

Unfortunately, a medical mistake in the first episode causes her to get pregnant anyway. And that’s just one plot among many.

The series is based on and includes Mexican telenovellas, which I know nothing about. But it seems to mean:

(Or maybe that impression is just the result of watching so many episodes in such a short time.) At any rate, it is highly entertaining. If Jane isn’t wild, the same can’t be said of anyone around her: The number and variety of hookups is astonishing. They all (even her mother) see Jane and her morals as a kind of a mysterious, rare bird. Yet she’s not some preachy, perfect, dull character: She’s just a young woman trying to make the best decisions for herself.

In a really crazy world. 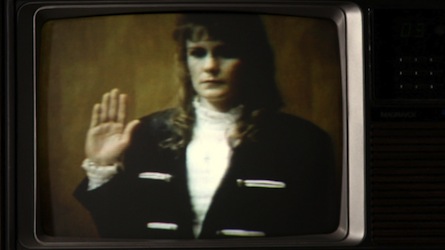 But HBO documentary Captivated: The Many Trials of Pamela Smart remind us that the real world can be pretty crazy as well.

The Pamela Smart story is one you probably think you know, at least if you were around in 1993. She was the pretty, blonde school worker who had an affair with a teenage boy, who later murdered her husband. She was convicted of conspiring to commit murder, the story being that she had seduced her young lover into committing the act. The case inspired the movie To Die For, starring Nicole Kidmann.

The documentary covers the media circus surrounding the case at the time. I hadn’t realized just how nuts it was on American TV, down to presenting a full re-creation of the supposed crime on television before the fully televised trial (the first ever) even took place! It points out which often-repeated “facts” presented in the media weren’t true, and some of the lax aspects of the case itself (such as allowing the four young men involved to stay together in prison pre-trial; and maybe get their stories straight?).

The “seductress” story was so compelling, it seemed any reality that contradicted it got dismissed.

I went into watching this assuming she was guilty, and the documentary wasn’t necessarily trying to establish her innocence. Still, I’m left wondering, particularly given the inclusion of recordings by one of the jurors (made at time of trial), who had extreme doubts about the evidence as presented. Perhaps Pamela Smart is guilty, But after watching this, I don’t think that’s been proven beyond a reasonable doubt.

Nevertheless, she’s in jail for life, The actual murderers are due to be released soon.

One thought on “Wild women! Some reviews”