Adam Lambert is releasing a new single called “Ghost Town” sometime this month, to be followed by a full album this summer. I know this, along with many other Lambert facts, because I’ve recently become very interested in all things Adam Lambert. He is my current celebrity crush.

I am a bit weirdly monogamish about these. At any time, I of course enjoy the work and attractiveness of any number of celebrities. However, there is generally just one that I prefer above all others. Currently, that’s Lambert.

Whom, I believe, succeeded Spike, as portrayed by James Marsters… 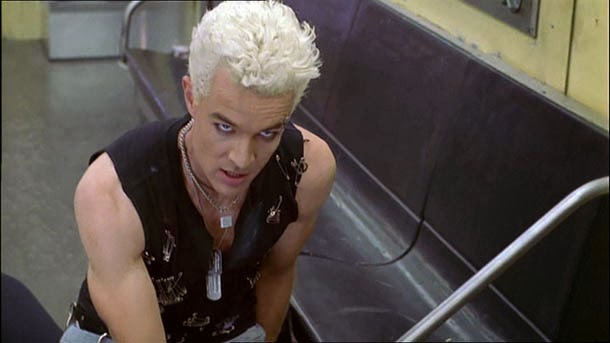 So I may have a “type” when it comes to celebrity crushes.

A cool, steampunk, glitter-rock vampire with, like, tats and guyliner…

Of course, for an actual relationship, this type is completely unrealistic—starting with the fact that I will never meet these people. And if I ever did, I would never be beautiful or charming or interesting enough for them. I’d just be another fan.

Although this kind goes both ways. I mean, who would actually want to date a celebrity? Your life suddenly made public? Your identity subordinated to someone’s else’s fame? And having to deal with an artistic temperament? With a partner who’s always off on tour or shooting on location? Who is constantly being tempted by adoring fans and groupies, or having to make out with his coworkers? No thanks!

So, a celebrity crush is all about fantasy. And its unrealistic nature goes beyond just the celebrity vs normal person thing. For example, with Roger Daltrey, I wasn’t really into the present tense him. I mean, dude’s 71 years old! He looks great for his age… 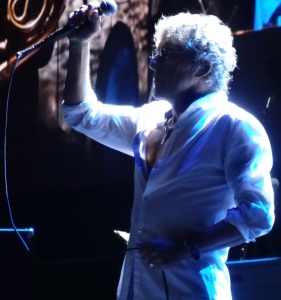 But he’s still basically a grandpa.

Now, actor James Marsters is only moderately older than me; his present tense self was just fine, age-wise. Thing is, though, I didn’t really have a crush on “actor James Marsters”. I was really more into his character, Spike. Who was really very different from Mr. Masters. So this was a “fiction” crush. “Double fiction” really, as this was not only a fictional character, but a fictional creature as well. A vampire!

The non-vamp face was admittedly much hotter, though…

And Adam Lambert? He’s only 33, and he’s not fictional, so that’s all good. But he is gay. And not in “I can just pretend he’s bisexual” kind of way, but gay gay. So this would be a “sexuality is just construct” crush (or something. I have to keep working on that label.)

At any rate, I’m hardly alone in this impractical attraction.

Lambert is handsome — six feet one and 185 pounds, with patrician features and sky-blue eyes — and he’s unrepentant about flirting with both sexes. Even when you know that he’s gay, it’s hard not to find him physically attractive. And that’s the way he likes it. “I loved it this season when girls went crazy for me,” he says. “As far as I’m concerned, it’s all hot.”
— Vanessa Grigordias, Rolling Stone Magazine: “Adam Lambert: Wild Idol”

It appears that even some straight men get caught up in it.

At the first few notes of Don’t Stop me Now, husband looked up.

“Fucking hell,” he said, “he’s gorgeous”.  This is a guy who is normally fairly heterosexual.

— From My Bad Ass Alter Ego (a truly terrific blog about Adam, Queen, and music performance in general)

But it’s not just his physical beauty, or his incredible level of fitness, though both are quite remarkable.

(Particularly that his fashion and style sense have a come a long way since his Idol days.)

Because there are a lot of gorgeous, well-dressed celebrities. Not too many of them, however, sing as well as Adam Lambert does. His voice is often described as “angelic”.

Blast from the Past — Adam singing “Mad World” on Idol

Which again, might not be enough, if he didn’t also sing songs I really enjoy. I am truly grateful that he has revitalized Queen, my favorite band, breathing new life into their music and allowing me to see them in concert for the first time.

Adam Lambert’s beautiful interpretation of one of Queen’s best songs: “Who Wants to Live Forever”

He was also an incredible interpreter of many styles on American Idol, which I caught up with via a 2.25 hour YouTube clip! Besides “Mad World”, I also especially liked his take on Johnny’s Cash’s “Ring of Fire” and Zeppelin’s “Whole Lotta Love”. His own solo output is pretty small at this point—two studio albums, one live—but also quite enjoyable.

And he not only has the vocal chops; he is a performer. In concert, he is charismatic and fun. And quite the dancer.

I also appreciate that in interviews and such, Adam comes across as a rather sweet person, with an endearingly goofy side. He never seems to take himself too seriously.

Both of these GIFs also from http://lilybop.smugmug.com

But he’s not all kittens and puppies. It’s good for a celebrity crush to have a bit of a dark side, for interest. Daltrey seems a very decent guy, but still had a temper (and more than few illegitimate children). Spike became one of the good guys on Buffy, but still and always—vampire! And Adam? Well, he’s the guy who nearly won American Idol, then scandalized middle America with his crotch-thrusting, tongue-kissing performance on the American Music Awards show. Remember?

Basically, the things he does with his hips, microphone stand, and tongue while performance are, well, not exactly “angelic”.

And what does my actual life partner thinks about my celebrity crushes? Well, he’s mostly confused by them. He doesn’t have his own, and doesn’t see the point of obsessions with the imaginary.

But he’s come to accept it as something I enjoy that is no threat to him–except for his having to attend a few more rock concerts or watch a few more vampire shows than he might otherwise choose to.

6 thoughts on “Of him I wish to muse aloud”