“What? Where is this place?”

Timmins, Ontario is not exactly known as a fine dining destination. So when jean posted photos of us eating items such as lobster bisque, caprese salad, rack of lamb, and crème brulée, some of the locals couldn’t believe the meal was had in Timmins.

The restaurant is relatively new. It is called 1800 Restaurant, and it is located in the somewhat tired-looking Ramada Inn on Riverside. (When we went for dinner, the hotel seemed eerily quiet, as though almost no one was staying there.) But they’ve done a reasonable job of sprucing up the dining room, even if the cushioned seats were a bit low for the vertically challenged.

And the food was… pretty decent, actually. Jean’s lobster bisque had a good base, but was too salty for our taste buds; it might have been fine for some people. Caprese salad is admittedly an easy dish (as long as you have good tomatoes), but some restaurants still manage to get it wrong. This one didn’t. Our dining companions seemed to enjoy their appetizers of seared scallops and fried rice balls, respectively.

As my main, I had pickerel almandine—pickerel being a local fish. My brother reported that on an earlier visit, that dish had been too salty. They have rectified that problem. My only issue was the lemon seasoning not being applied consistently to the fish, so in some spots being too intense. Overall it was still a good dish, though, with crisp vegetables and mashed potatoes. (Will note that one diner judged the mashed potatoes too dry, but I was fine with them—matter of taste, I guess.) 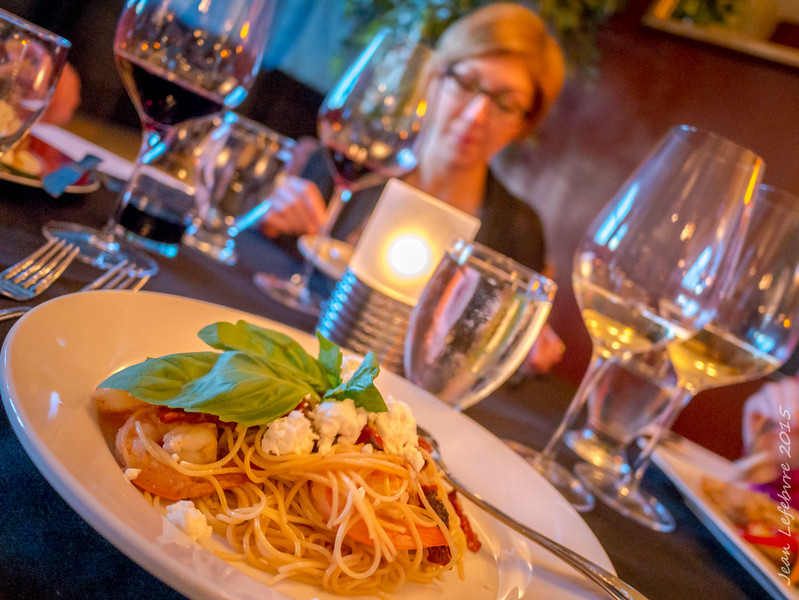 Two people had the seafood cappelini with goat cheese, which was quite nicely executed.

The house-made desserts of creme caramel and creme brulee, each infused with a different type of alcohol, were successful, the brulée slightly more than the caramel.

The service was acceptable, but by no means fine dining levels. For example, the bottle of German Riesling we ordered (just $35) was opened for us, but not poured. Just plunked on the table. That seemed really odd. And getting our bill at the end took ages—a good 45 minutes after we were done—as staff kept disappearing into back rooms. Our waitress was perfectly pleasant all evening. But the service was just… not refined.

Still, I do hope this place survives, particularly if they keep improving, as they seem to be.

On our drive back from Timmins, we stayed in the sleepy town of Singhampton and dined at Haisai. We’ve been to Haisai several times before, but hadn’t been for dinner in several years. All the dim sum items available at lunch are also on offer for dinner (though the wood-burning oven pizzas are not), but since we’d already tried a number of those, we decided to go the more traditional appetizer / entree / dessert route.

Jean declared his zucchini soup the best ever and—I can’t remember what my appetizer was. But I’m pretty sure I liked it as well. They had only three entree items on the menu. I went with the white fish, while Jean had the suckling pig. Both were well-prepared, seasoned, and arranged. Delish, For dessert we shared the peach and almond tart with chantilly cream.

Our mains at Haisai, as always built around local ingredients

Talking with Hermann Stadtlander, restaurant host, we found out that the future of Haisai is somewhat in doubt. Several of the kitchen apprentices are moving on, and Hermann himself is off to apprentice in Europe for about a year. So it’s far from certain that the restaurant will even be open this fall and winter.

My hairdresser had mentioned a new restaurant called Fork and Cork that she thought was downtown Kitchener. When I looked it up, though, I found that it was actually on Weber East, near Fairview Mall.

But it sounded kind of promising: Chef trained at Stratford cooking school, with past experience at Toronto’s Buca, offering a menu with a focus on local foods. So we rather spontaneously decided to go eat there on Friday.

The place was larger and busier than we were expecting. It also had those wonderful open ceilings that make rooms noisier than they need to be! Yay! Jean described the overall atmosphere as somewhat industrial. (Nice detail, though: They seem to have their own water spritzer, so you can get carbonated water without paying San Pelligrino prices.)

But they do know how to cook here. Jean continued his soup run, and declared the corn chowder with pork hocks the best he’s ever had. (That’s two “best ever” soups within two weeks, if you’re counting.) I had the lamb skewers, which were nicely seasoned and cooked. It is a bother to have a pull meat off sticks, though. 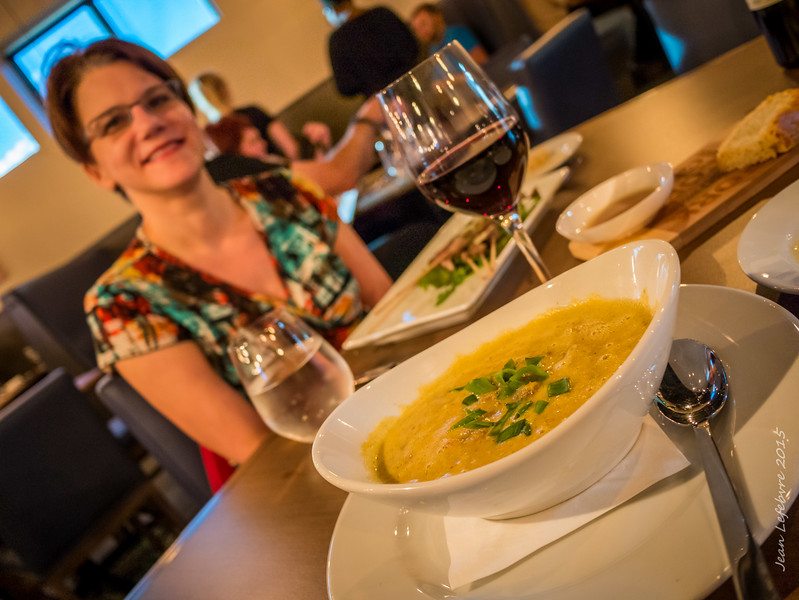 We are all about the pasta for our mains. Both the spaghettoni with braised duck leg and the ravioli stuffed with peas and goat cheese were pretty amazing, really. And the Italian ripasso we picked out went well. (They have quite a few local wines also, and pretty reasonable prices—many bottles around $40. The ripasso, at $62, was one of the most expensive.) 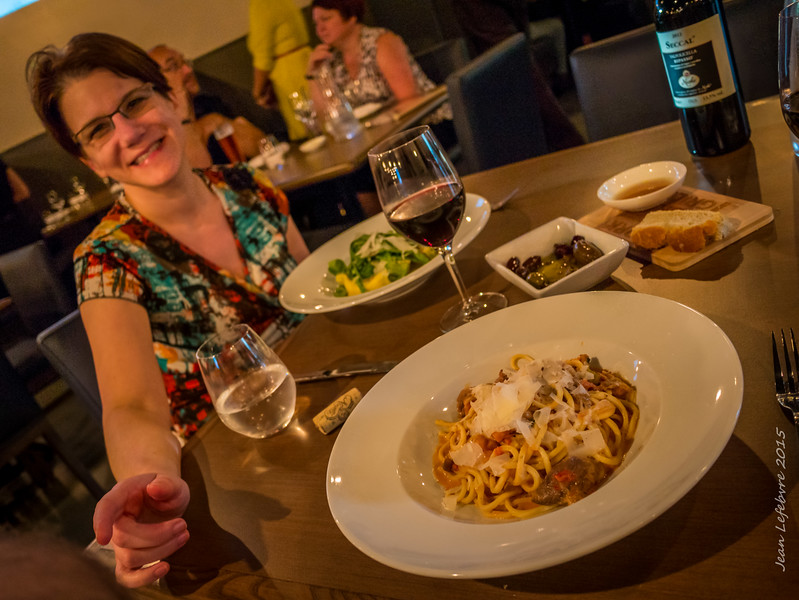 Not sure what I’m pointing at here…

The only slightly disappointing item was one of the desserts. The peaches with ginger ice cream and sesame brittle sounded great in theory, but the ingredients didn’t work together in practice (though they all tasted fine on their own). The flourless brownie was just delicious, though.

The service was good, our waitress attentive and knowledgeable. The pace of the meal was a bit fast, though. Each course came out a bit more quickly than we were expecting—albeit never before we were done with the last. So this is no place for a long, leisurely romantic dinner or catch-up with friends.

My title says one price, which is a bit of an exaggeration. Of course the totals of each meal weren’t identical, but they were all in the same ballpark for two people, three courses, one bottle of wine (likely the biggest variable). The totals for each including tax and tip: 1800 was $162, Haisai was $176, and Fork and Cork was $185.