I was nervous Monday.

Despite my reduction in news consumption, and even though off on a wine-soaked vacation last week, I was well aware of what the polling was showing: That Harper’s horrible Islamophobic campaigning had seemingly backfired, and that the Liberals’ numbers were rising steadily—showing a comfy 9-point lead in one of the last polls to be released.

But also knew that polls were often wrong, and at any rate, were entirely meaningless. Only the vote counts for real.

My less emotionally invested yet still interested husband set up his tablet in anticipation of result, using CBC website tools to track certain ridings. He was at the ready as soon as Eastern results were posted. As I distracted myself with housework and such, he was giving reports:

And we all know what happened. Canada’s Atlantic provinces turned into one big Liberal red lobster.

Yes, I know this is just Nova Scotia, not all the Atlantic provinces…

Of course that made me feel better, but we still had a big time gap til the more decisive Quebec / Ontario results.

So we watched a little iZombie to pass the time.

Around 9:30, I turned on the TV and said I’d just “have a look.” Of course, then I couldn’t stop watching (though I did bounce around channels a lot), mesmerized as the “Leading  or Won” seat counts just kept ticking up. By 10:00, they’d called that the Liberals would have a plurality of seats. The numbers kept going up, til it was clear that majority wasn’t an impossibility after all. And that was officially called around 10:35.

It is unfortunate that the NDP and Greens were collateral damage in this; I didn’t wish ill to either of those parties, who lost some good MPs. But they were just as out-campaigned by the Liberals as the Conservatives were. The Liberals were able to do something else that hasn’t happened in decades: inspire disaffected voters to come back to the polls. The Liberals received more votes than in any party in Canadian history.

Even when the overall results were evident, I couldn’t stop watching. I looked up particular ridings. I cheered the principled Michael Chong’s victory, the only Conservative for whom that was the case.

I was pleased that my local candidate, Bardish Chagger (#MovesLikeChagger) garnered nearly 50% of the vote. I was glad to see her joined by three other Liberal MPs, replacing our previous set of middle-aged, white Conservative MPs with a more diverse group.

(And the remaining middle-class white guy’s name is Bryan May, so he can’t be all bad!)

I liked that the Liberals won seats in all provinces, even Alberta and Saskatchewan! (What’s up with Saskatchewan, anyway? Why so Conservative?)

And I stayed up to watch all the speeches. I admit to being moved by Trudeau’s story about the Muslim woman and her baby. (But then again, it was nearly 1:00 AM, so that might just have been an exhaustion response.) 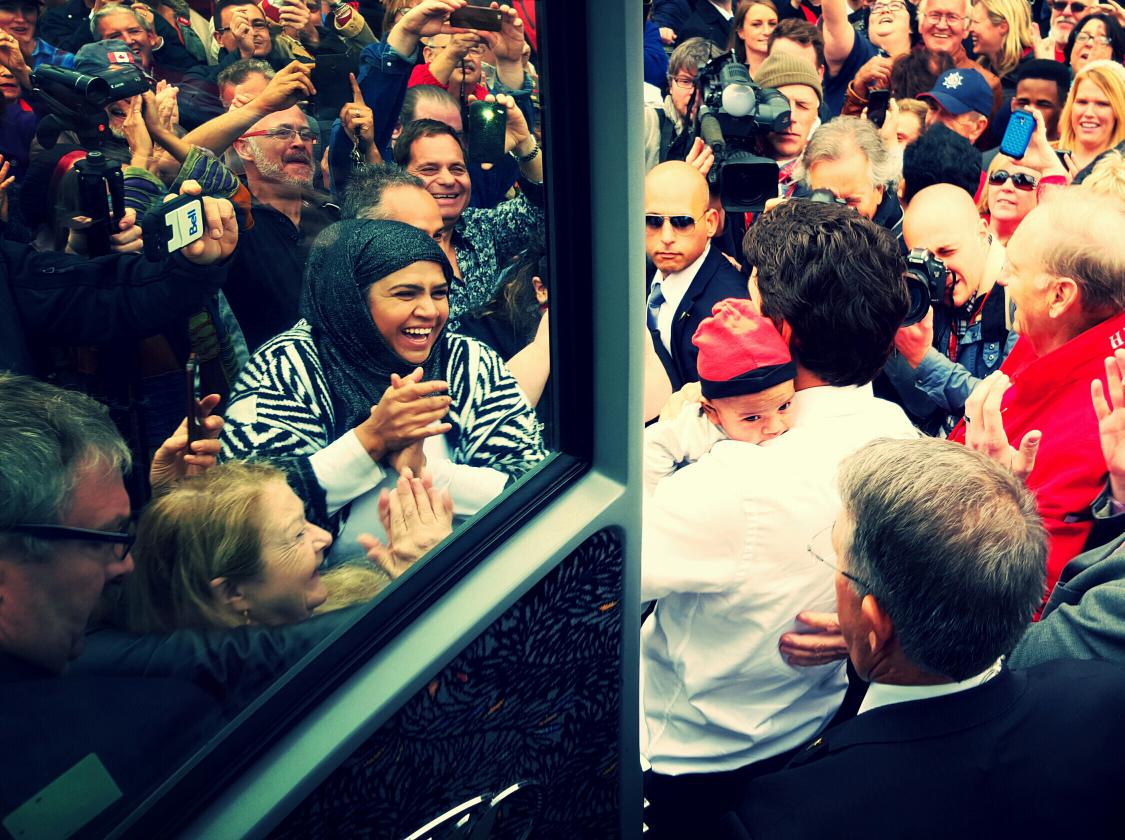 This is the picture: It really happened!

And while I was going to say to say that results really don’t affect my daily life much, this one has. Because now that I know this story has a happy ending, I’ve ended my news diet, and have happily returned devouring interesting news stories wherever I can find them.

Though I must say I didn’t expect quite so many of them to be about how “boinkable” Justin Trudeau is. World: some respect for our hot new PM-designate, please!

2 thoughts on “Sunny ways—Canada is back”