“How did you even hear about this place?” my friend asked.

The Naked Oyster restaurant is in Cambridge, and none of us are too familiar with Cambridge restaurants.

But based on a good review in Waterloo Region Record (that’s how I heard about it, through the exotica of the local newspaper), it seemed worth trying.

It’s fairly small  and casual. The menu is written on a chalkboard, with a few additional items the waitress told us about. It’s not a great choice for those who don’t like seafood; they only had one meat entree to offer (though it did sound good). But we were all fans of the fish, so it worked for us.

The alcohol on offer is also quite limited: three whites, three reds, and one type of beer, along with mixed drink options. But among the whites was the excellent Oyster Bay Sauvignon Blanc, so that’s what we ordered.

We started with two types of oysters: raw and Rockefeller. They were both lovely. The raw ones were from PEI, and served with three dipping sauce options. The Rockefeller were covered in butter, breadcrumbs, and Parmesan.

(The appetizer items not ordered included options such as salads and smoked salmon.)

For mains, two us of opted for the mussels, one in garlic and white wine sauce, the other in a more decadent smoked bacon and cream sauce. Both quite delicious, with very few mussels having to be discarded for being insufficiently open. 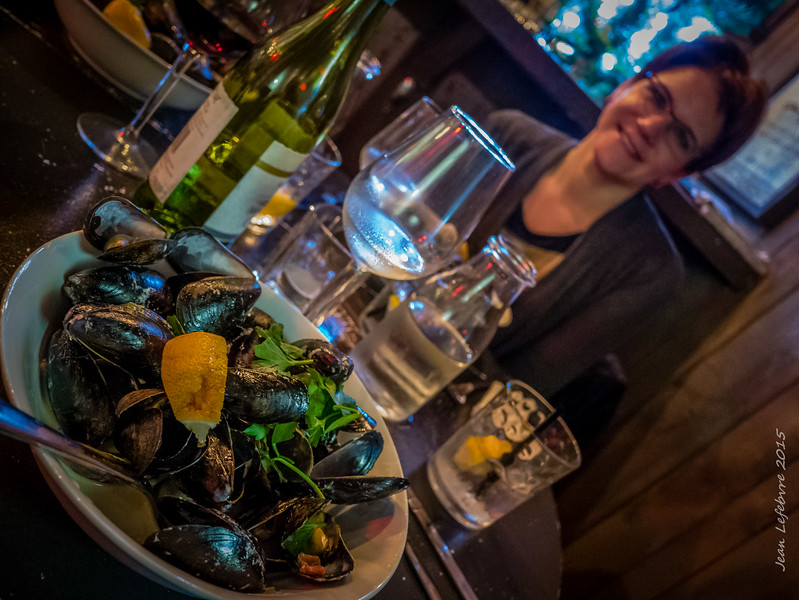 Not my meal, but somehow I’m still in the photo…

I had the Cioppino, a tomato-based seafood stew with mussels, clams, shrimp, and white fish. That was quite tasty as well. 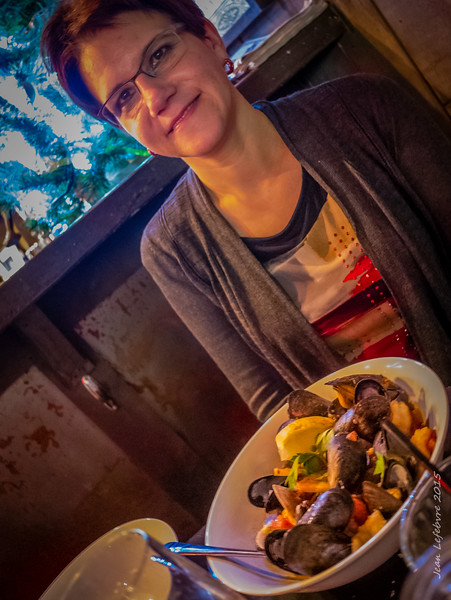 Dessert options were limited to two: bread pudding and crème brulée. But these were both quite fine as well. And a very cute size. 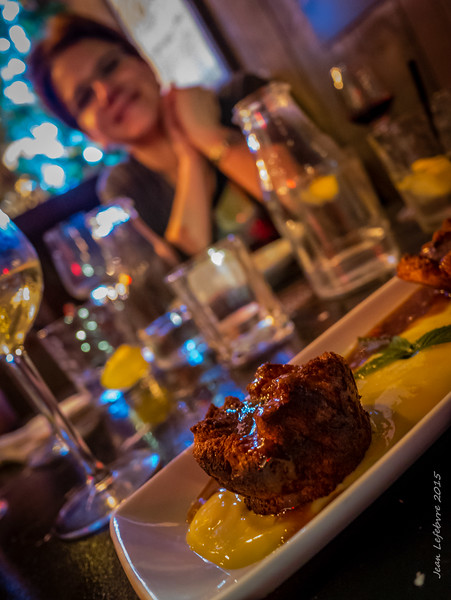 The service was friendly and knowledgeable about the menu. There was, however, a big wait between taking our order and the appetizers being served. The reason wasn’t a mystery: They were dealing with a really big group who had arrived before we had. Still, it would have helped to at least have been given the bread ahead of time, or something.

After that initial hiccup, though, the pacing of each course was as one would hope and expect. And I would note that despite the restaurant being completely full this evening, it wasn’t overly loud. We could converse without shouting. Hurray for that.