Berlin has a lot to offer besides memorials to its Wall. Initially I’d thought that since we were staying in the city a whole week, it should be pretty relaxing—that we’d be able to take in activities at a leisurely pace. Wasn’t quite what happened. (Maybe we’re just not that good at relaxing.) Berlin is pretty sprawling, and we wanted to see different parts of it. So while it wasn’t really stressful—at least not that often—it definitely felt like we were always on the move. 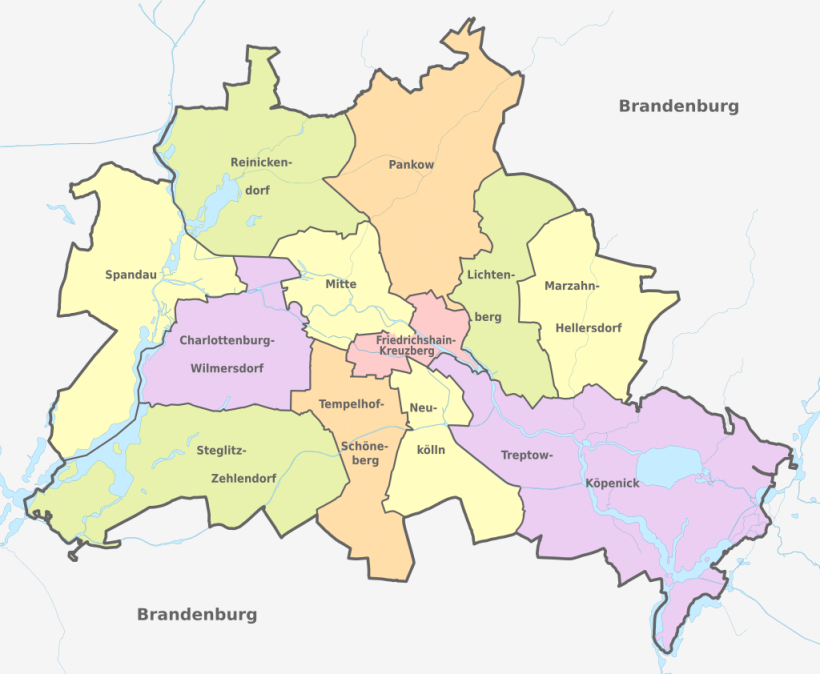 This is some of what we saw (that I haven’t already covered).

Berlin’s Holocaust Memorial is in a kind of a maze design. It was interesting, but strangely… Playful, for a Holocaust Memorial? Especially since a lot of kids were, in fact, playing a sort of hide and seek in it the day we were there? And the interpretation centre was closed, and we didn’t get back to it, so we got no clues from that. Worth seeing, but unexpected.

Members of Adam Lambert’s band at the Holocaust Memorial, same week but not same day we were there. Source: https://www.instagram.com/p/BEwBO4uIMve/?hl=en

This site had panel exhibits on the Nazi rise to power and the subsequent effects on the population of Berlin. I found it quite interesting, especially learning (or being reminded) that after a period of economic hardship and high unemployment, Hitler and the Nazi party failed to gain an outright majority in the election: They got 42% of the vote. Now, that’s enough for an outright majority in Canada’s electoral system, but in Germany, Hitler had to pass laws giving him the ability to govern basically unopposed. He did this with the support of several minor parties. The ones who weren’t on board later found themselves harassed and arrested.

The Pergamon contains these huge installations re-creating Greek courtyards and Babyloninan palaces. I’ve never seen anything like it. And the included audioguide explained the effort in bringing these huge pieces over to Germany from where they were found, back in the day when Germany was the per-eminent archaeological nation. 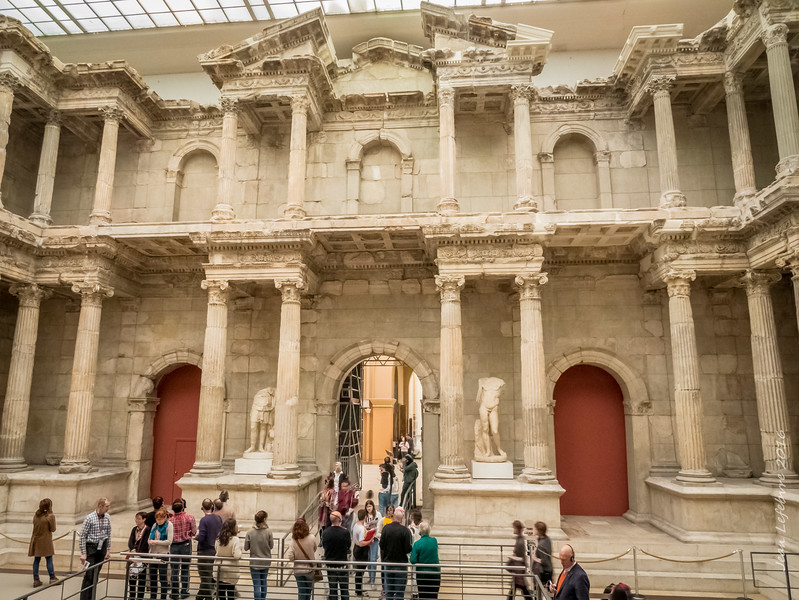 A big chunk of Greece inside a German museum

The Neues (“New”) museum, as I’d mentioned, we liked even more than the Pergamon. The building itself is lovely: “a dynamic space that beautifully juxtaposes massive stairwells, domed rooms, muralled halls and high ceilings”, as Lonely Planet puts it. The exhibits are a mix of old and new, such as artifacts from Troy along with a sociological look at the meaning of moustaches over time. 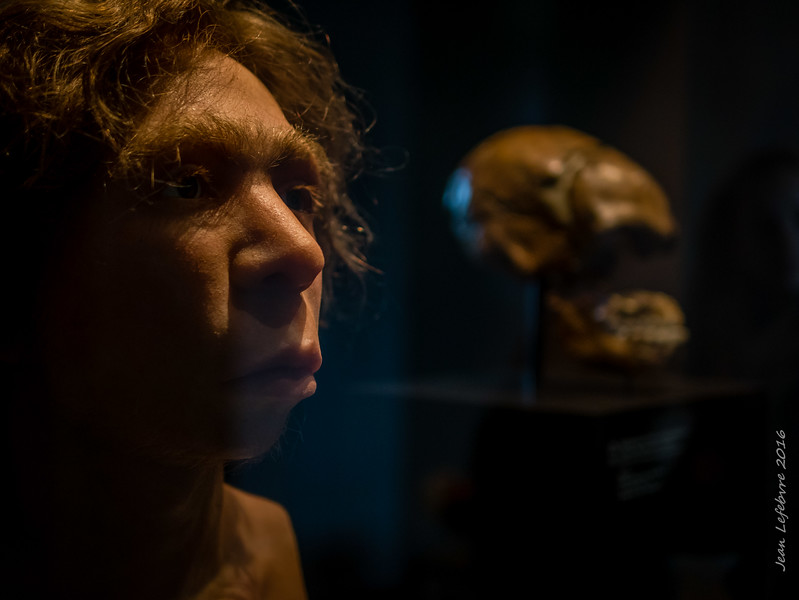 Computer modelling was used to determine what this Neanderthal looked liked, based on his skull. Cool, eh? 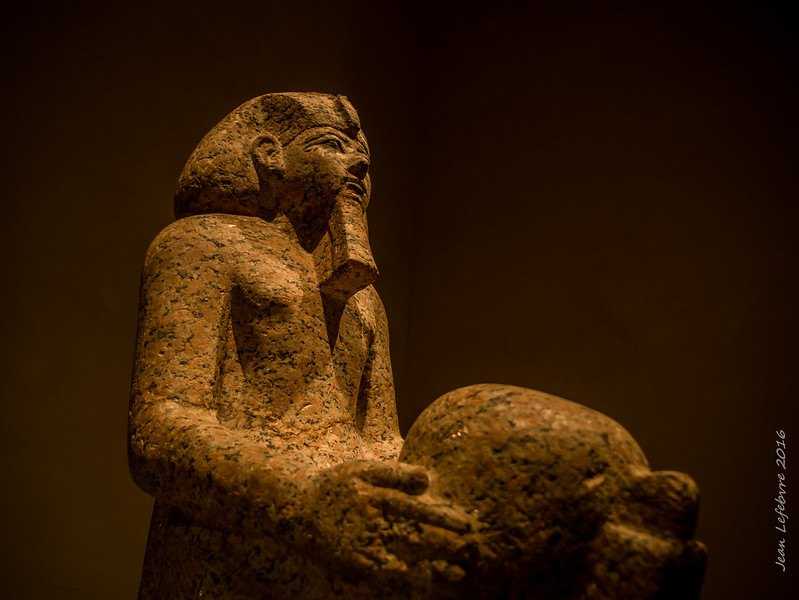 The Neues has a particularly great collection of Egyptian artifacts

The major showpiece of the Neues is the bust of Nefertiti—but that, you are not allowed to photograph. It is indeed a stunningly beautiful piece. (The much less well-preserved bust of her husband is also on display here.)

To get here we had to take the U2 to Zoo Station, meaning that I had this song stuck in my head all day:

Our first stop was at the Kaiser-Wilhelm-Gedächtniskirche [honestly, these German words], a church that was bombed during the second world war. Its been left in its damaged state as a war memorial. The remaining room is lovely, with painted roof and frescoes, and exhibits some interesting artifacts and photos of how the church as a whole once looked. 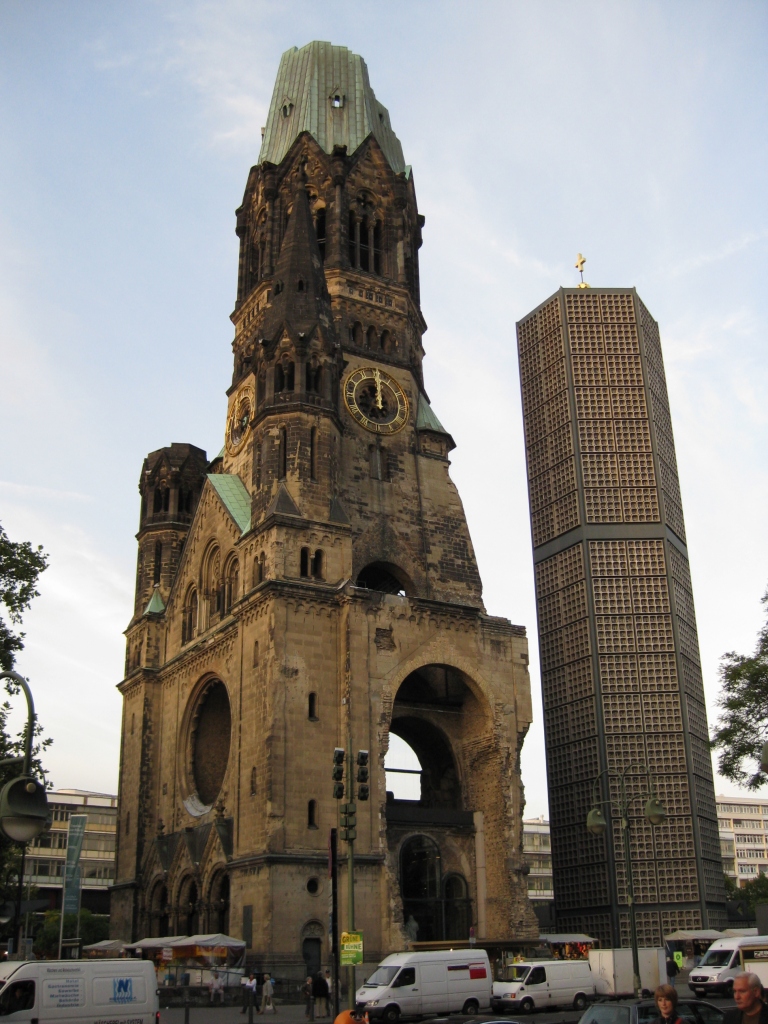 Found photo, as construction made it difficult for Jean to get a good shot of this building

Zoo station is so named because it does overlook the Berlin Zoo, which we didn’t go in and visit (though it’s supposed to be quite good), but we could see the monkey and baboon cages from the rooftop terrace of Bikini Berlin, a mall we visited just to gawk at its gorgeous interior, and not toshop at. (We were terrible consumers in Berlin. Didn’t buy anything.)

The Käthe-Kollwitz Museum we visited largely because it was a convenient fill-in between lunch and the Story of Berlin Museum. Described as Germany’s greatest woman artist, she was very talented, especially with her lithographs, many of which had a maternal theme. But due to demands of motherhood and, especially, limitations placed on her during war time, she wasn’t able to produce a great deal of work.

Strangely for people who like art galleries and museums, that ended up being the only one we visited. We didn’t make it to the National Gallery, the Art Museum, or the Salvador Dali Museum. 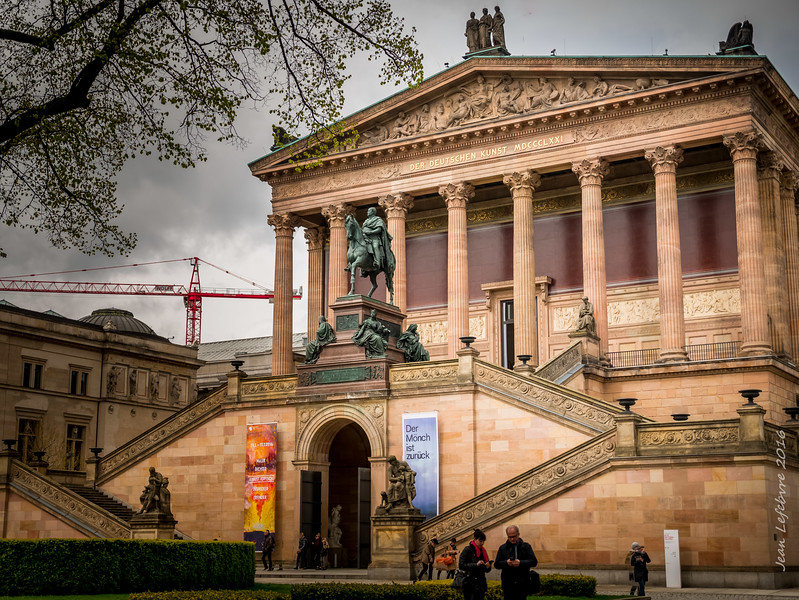 All we saw of Berlin’s National Gallery: Its impressive exterior

When we found that the train deposited us in downtown Charlottenburg rather than at the castle site, we decided to walk to it rather than take the bus. The Schloss sight has four buildings you can visit, but the most impressive one is one we started with, the New Palace. This was the home to a series of German royals past, each of whom seemed to want to build their own wing of rooms when they took over, rather than occupy what was already in place. So the palace is quite large and reflects a variety of decorating styles. Though partly destroyed in the war, enough of it remained for reconstruction to make sense.

The New Palace audio-guide (most Berlin museums included an audio-guide free) was one of the best I’ve encountered, perfectly timed to guide your walk through the series of grand and slightly less-grand rooms.

Many statues are displayed at Schloss-Charlottenburg. I love this one. 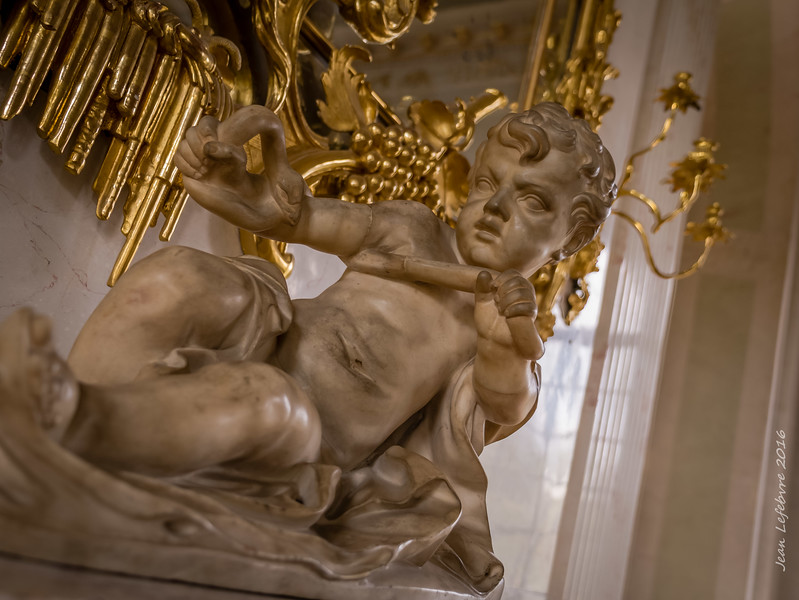 And this is a cool photo

The remaining buildings were not as grand, but were worth taking a stroll through on the the pleasant garden grounds. The Altes, an older palace, is used to exhibit art (and, OK, I guess that is another art gallery we saw)—and had a remarkably poorly timed audio-guide! The Belvedere exhibited a whole lot of porcelain. The Mausoleum had a very impressive interior, with marble, and columns, and statues. 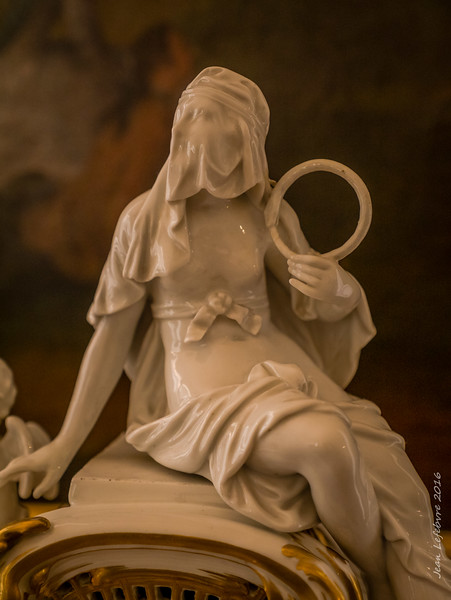 Not a mausoleum picture (still from the New Palace), but pretend it is

Postdamer Platz is called a “square” but is more like a disorienting set of intersecting streets with the same name. So it took us a while to get oriented, but once we did, we decided to visit the Museum of Film and Television, which is free later in the day on Thursday. I, who had studied how influential Germans were in the early history of cinema (The Cabinet of Dr. Caligari,  Metropolis, Greta Garbot, Leni Riefenstahl), found it much more interesting than Jean, who was not aided by his audioguide running out of battery. The only part he somewhat enjoyed—which I also found fun—was the special exhibit on all the Oscar Best Actress winners through history. 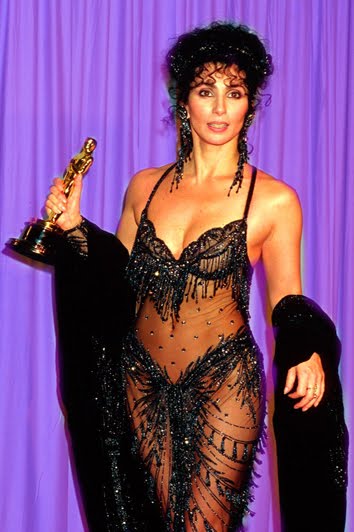 Most of the week in Berlin, the weather was unseasonably cool. Friday that finally turned around, and we got a beautiful, warm, sunny day. It felt that all of Berlin was out in parks, basking in the warmth. We decided it was time for a River Cruise. 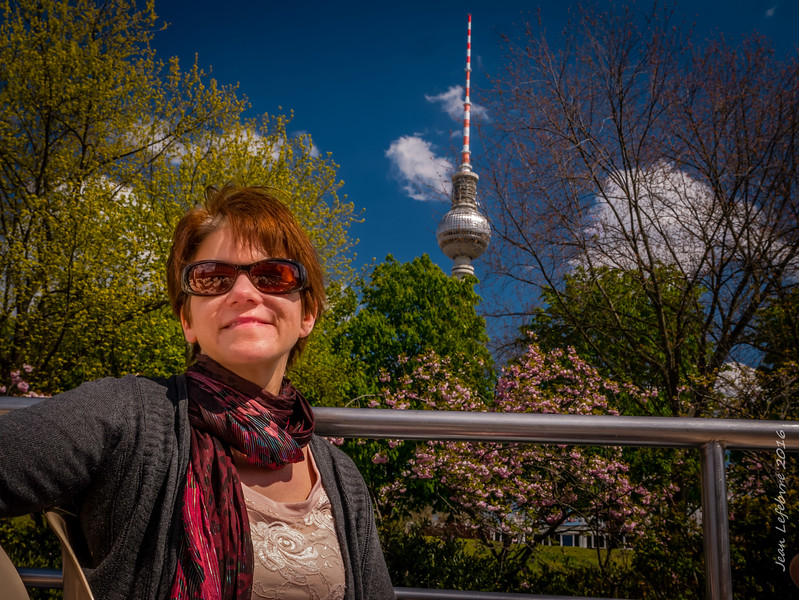 It was a good, one-hour tour. You did get a different view of Berlin and its buildings from the water, and we were supplied with English audioguide as to what we were seeing, though the geographic organization meant we were sometimes jumping in history in a somewhat confusing way. 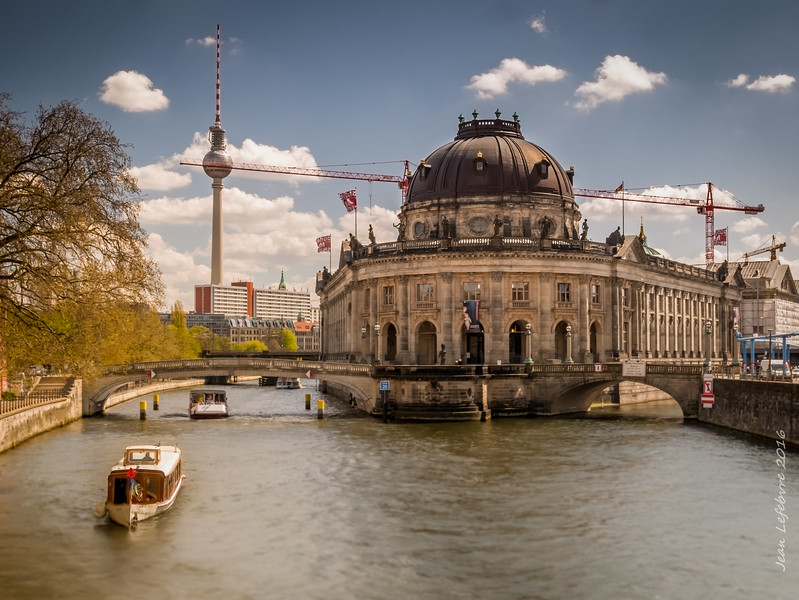 The Berlin Dome viewed from the water. Complete with construction cranes.

Potsdam is a popular day trip spot from Berlin, being about a 40-minute train ride away. Although our trip was slightly longer, because they were doing some track work on the final part, so we were moved to a bus for that bit.

On the way I’d read about a tour that sounded as though it would be good, taking us to all the main sights in the town, with a guide. The tour representative was there to meet our bus, and when we were 5 Euros short of the quoted price, just accepted that.

It was nice not to have to figure out how to get ourselves everywhere, for once. But what we hadn’t realized was that we wouldn’t get to go inside any of the museums or castles: just see the exterior, led by a guide who had to alternate between German for one group and English for another. 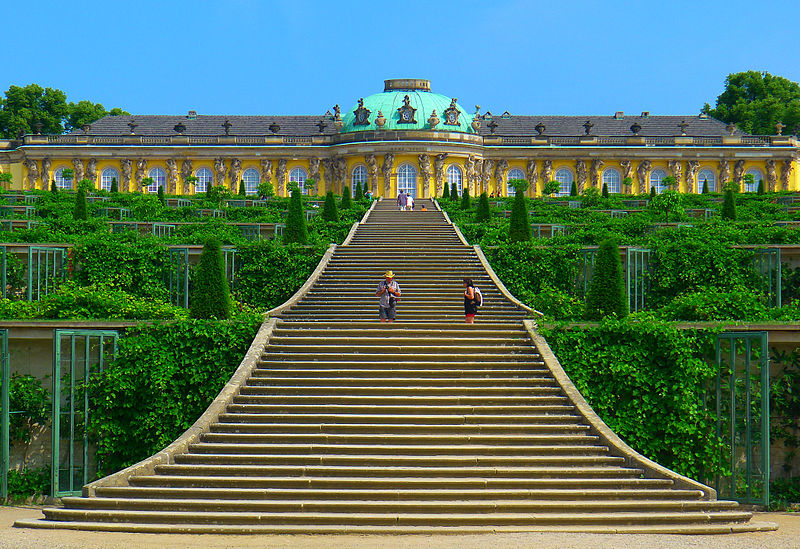 Still, we did learn some things about the Prussian emperors who once inhabited these palaces, such as that they spoke better French than German, and that they introduced the potato to German cuisine.

After the tour, we would have had time to head back to one or more of the sights and tour inside, but we decided to just spend some time in the fairly charming old town instead.

Among the other sights we did not get to:

But I still think we did all right.

One thought on “Other Berlin highlights”