Mocha’s actual date of birth is a mystery. All we know of her origins is that she and her kittens were found in the backyard of our MP at the time. The Pet Patrol organization rescued her, had her spayed, and she was taken in by a foster family.  One day she was the featured cat for adoption at Pet Value, which is where Jean and I first met her.

No matter her actual age (and one vet we saw early on suspected she was a few years older than our other cats, based on the state of her teeth compared to theirs), she was always taken to be younger, because she was so tiny. Mocha never really stopped looking like a kitten. It was great, really. All the adorable-ness of kitten-hood without all the work of dealing with an actual baby cat.

Mocha in 2006; apologies for the freaky eye which I don’t know how to fix in editing

Mocha at the pet store was the sweetest thing. You could pick her up and she’d just nestle into your arms and purr. I was smitten. Jean, meantime, was smitten with another, apparently shyer male cat that we met at a foster home. We resolved our differences by adopting both. Mocha and McSteamy took to each other immediately, finding comfort in proximity to each other. Their bond was to endure for a lifetime.

McSteamy and Mocha had an enduring (though platonic) love affair

We soon learned, however, that Mocha’s pet store response was just her reaction to being in a strange, stressful environment: she seemed to feel her best option was to become as placid and sweet as possible. Once in a calm house, though, she reverted to nervous suspicion, and joined the shy McSteamy in hiding under furniture.

In fact, McSteamy was the quicker to warm to us, and within about two weeks had basically concluded we were the best people ever. Whereas Mocha spent months hiding behind cabinets and under furniture, taking advantage of her tiny size to limit contact as much as possible. I even called the Pet Patrol people seeking advice. Just give it time, they said. She will become a loving, affectionate pet.

Mocha “climbing mount Jean”, as I like to call it

She eventually stopped hiding, and especially took to Jean. I was the main feeder, which went a long way in putting me in the good graces of the other cats in the house, but Mocha was a nervous eater who seemed to view food as more of a necessary evil than a source of pleasure. So that wasn’t gaining me points with her.

In fact, at one point she seemed to view mainly as Jean competition, tending to take off in a bit of a huff when I deigned to join the two of them in their cuddle-fest. But, I did gain some advantage in not tending to take off for one- or two-week canoe trips. Facing the choice of no pets versus pets from me, she was all in for pets from me. And thereafter seemed to stop seeing me as competition, but more as an acceptable secondary source of affection.

You see, most cats will lie calmly and purr while you pet them, maybe flip around to get a belly rub, relax into sleep. But for Mocha, petting was a serious, intense business. She would rise up to meet your hand. She would rub her face on your face. It wasn’t enough to be pet; she needed, somehow, to pet back. 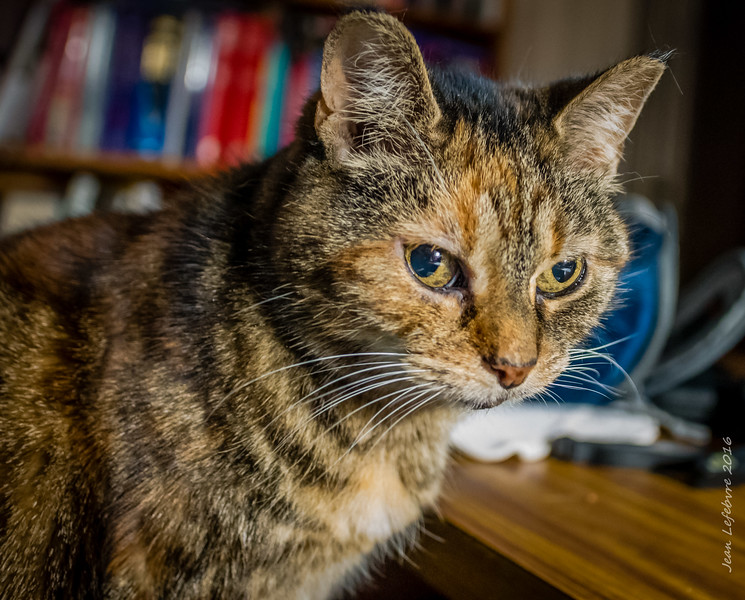 For Mocha, petting is serious business

And the purr. My gosh, such a big sound from such a tiny cat. We even recorded it once:

And conversely, her mews were quiet to the point of inaudible: You’d only know she was trying to tell you something if you happened to be looking to see her open her mouth.

She had her own rituals, as cats do. In the morning, she liked to sharpen her nails on the corner of the bed (replaced with a scratching post when we got a new bed), then run around and jump on the bed for the first pets of the day.

She was fascinated by flushing toilets.

“One day I will figure out this phenomenon”

After work (our work—cats don’t work), she loved to join Jean in his office to get the evening’s round of petting underway. This was not always conducive to Jean being able to accomplish whatever he was in his office to do: “Girl!” he’d exclaim. “Too intense!”

During TV time, her spot was the back of the couch, just behind our heads.

And at any time, she enjoyed windows, and sunlight (though had no interest in going outdoors), and even better if she could enjoy both with her best friend. 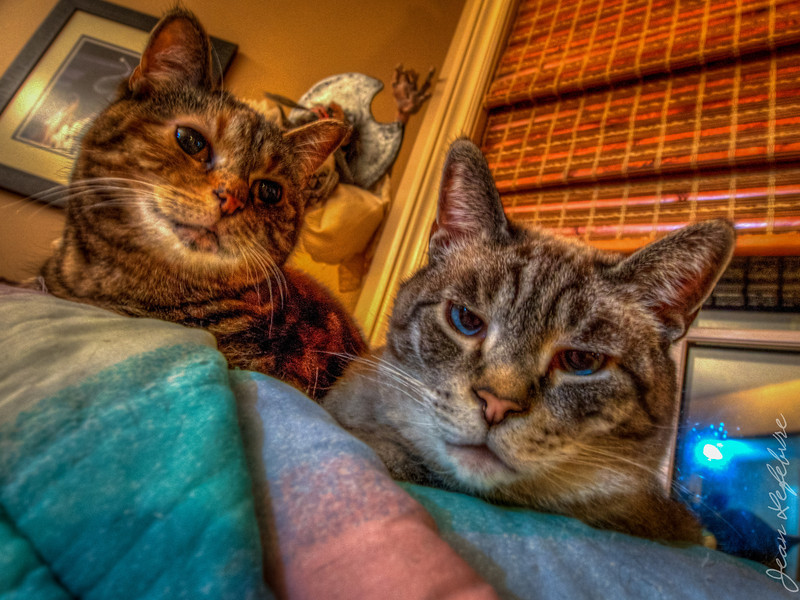 And the cat who once spent months in hiding became so comfortable in her home that even the presence of loud, strange repairmen wouldn’t daunt her. She’d just watch them with interest.

I was a little worried about her before going on vacation this fall. I’d like to suggest this was prescient of me, except that it’s a regular habit for me to worry about the cats before going on vacation. My particular worry focus this time was Mocha’s nasal congestion, even though this was a chronic problem of hers and the vet had already declared it didn’t seem to be serious. I resolved to get a second opinion on return from vacation, and watched her like a hawk before leaving. My conclusion was that she seemed to be happily going through all her usual activities and rituals, and that finally—after all these years—she seemed to really be enjoying her food.

The catsitter said that all went well while we were away (just for a week), but on our return, I noticed pretty quickly that something wasn’t right with Mocha. She moving her head strangely and batting at her mouth. She seemed to be having trouble swallowing water, of all things. On petting her, she seemed thinner than when we had left.

I brought her to the vet the first thing the next day, but the news was not good. She had a growth in her mouth that was, indeed, making it hard for her to eat and drink. There was no guarantee it could be treated, and even attempting to do so would likely require her to be fitted with a feeding tube. Instead, we went with the “trying to keep her comfortable” approach: She was rehydrated and sent home with liquid painkiller and a special, soft, high-calorie food that was easier to swallow (and apparently delicious, given that McSteamy and Zoe kept trying to steal it).

So Mocha’s last days were not terrible. She enjoyed the sun.

She continued to marvel at modern plumbing.

She got herself up in her window.

She gave and got pets.

She cuddled in front of the fire with her bestie.

She died peacefully on October 17, surrounded by the people who loved her.