We had someone over for dinner last Thursday, a not-that-common event that we did memorialize in photos. However, he did bring flowers—some lovely orchids—and Jean used those to experiment with close-up photography. 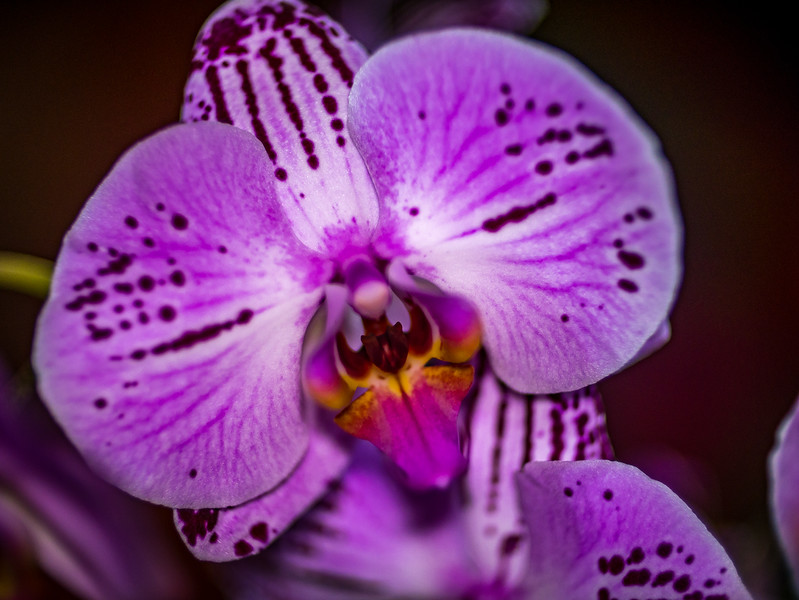 As the main course, I made Garlicky Lamb Chops. This recipe (follow the link) is so simple and fast, but turns out so well: You just dip the chops in a mix of fresh rosemary, garlic, salt, and pepper, then pan-fry them in olive oil.

One of the sides was Roasted Brussels Sprouts with Walnuts & Dates, though I used raisins instead. Fortunately, our guest liked Brussels sprouts; not everyone does. This turned out well also; these do well roasted, and adding raisins, walnuts, red wine vinegar, and honey produces a tasty results.

I also roasted some potatoes—I just winged that “recipe”.

Dessert was Cherry Fool, and I can’t find the recipe online, even though it came from LCBO magazine. Basically cherries in whipped cream with icing sugar and almond extract, though. And I used mixed berries that included cherries instead of just cherries.

Friday we were supposed to go see TransCanada Highwaymen with some friends, and I was really looking forward to it. This is a group made up of Chris Murphy of Sloan, Stephen Page of Barenaked Ladies, Craig Northey of The Odds, and Moe Berg of Pursuit of Happiness. They were to do songs by all of those bands, while regaling us with tales of life as semi-famous Canadian rock star. Doesn’t that sound great?

I’m sure it would have been. Unfortunately, Northey broke his ankle playing hockey about a week before the show, which then got cancelled. (Though as I keep telling people, I don’t know why he couldn’t still sit down to play guitar and sing.)

We decided to go out anyway and revisit TWH Social, present home of a former favourite chef. We’d found the place a bit loud on previous visits, but it didn’t as bad this time, at least for the first part of the evening. And I was very happy with my food. 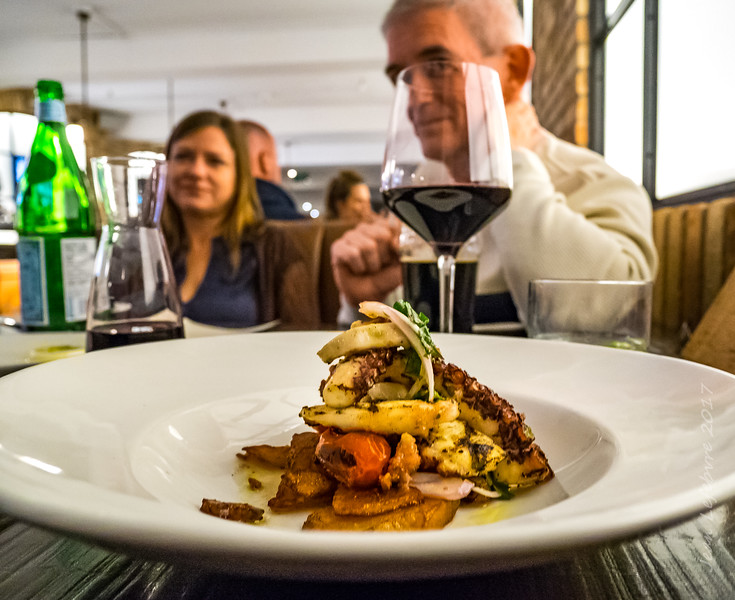 Squid with tomatoes and roast potatoes, a speciality of this chef 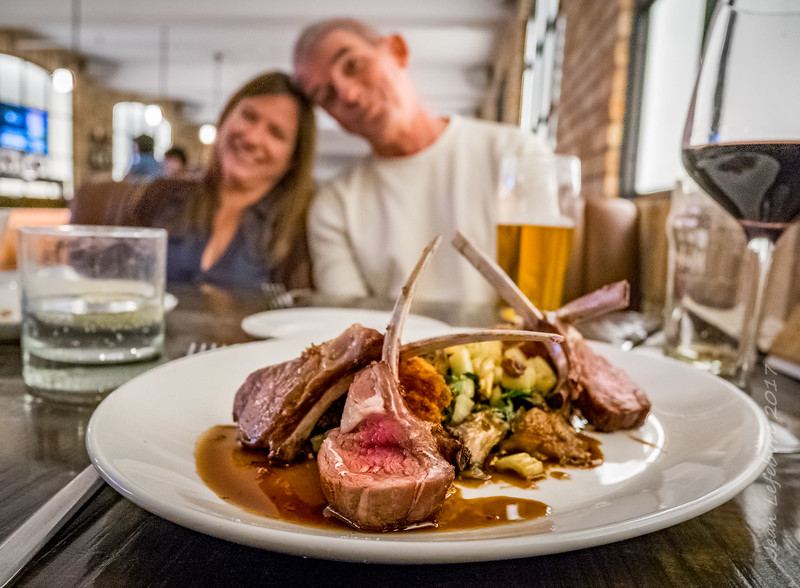 So yes, that’s lamb two days in a row for me.

Jean started with a Caprese salad, then had the gnocchi with sage butter and chicken broth. This was a different gnocchi recipe than what the chef had made at the previous restaurant, and Jean didn’t think it was an improvement.

Saturday we got our live music fix. Other friends had invited us to go see Whitehorse, a band neither Jean and I were familiar with before getting tickets. But I had been listening to them since, and they are pretty good.

Before the show, Centre in the Square offered a $30 three-course dinner in the Member’s Lounge, catered by Borealis Restaurant. We decided to do that, and it was great. First was a kale Caesar, then a paella, then—I forget what dessert was. All good, though, and we also enjoyed the drink list (among us, we sampled orange wine, Pinot Noir, champagne cocktail, Scotch), though it was more premium-priced than the food.

The show was done in “On Stage” format, meaning that the whole audience, and the band, and a bar, were up on the very large Centre in Square stage, instead of the usual “band on stage, audience in theatre seats”. It was pretty cool.

It was a good show. Opening act Begonia had a lovely voice and an entertaining manner, a combination that reminded me of Jann Arden (or Adele). 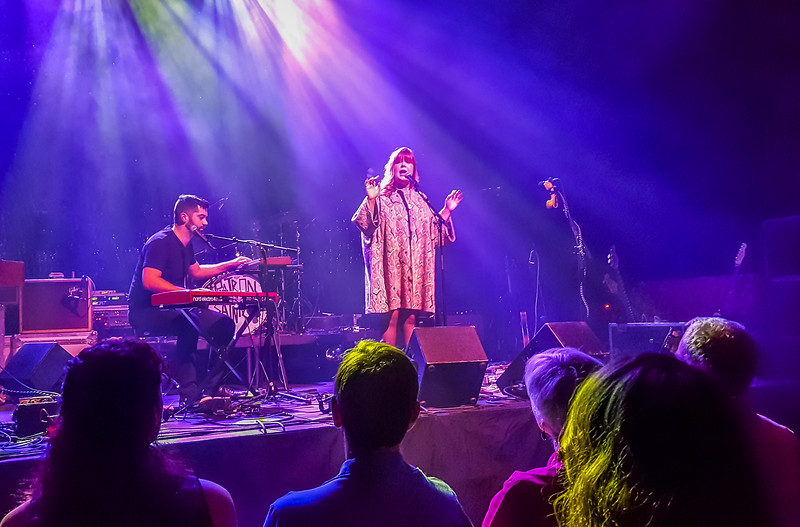 And Whitehorse did some of their best-known songs (I assume they were? At least, at this point I recognized a number of them), reminisced about the early support given them by Waterloo, and talked of causes important to them, like supporting sex trade workers. 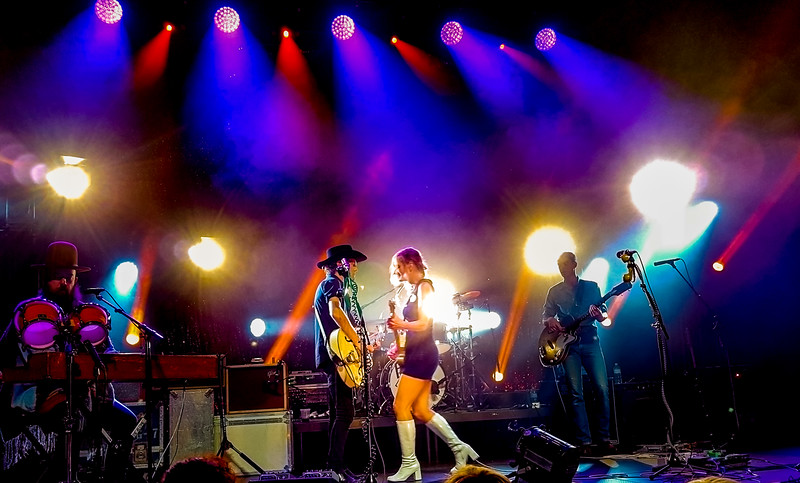 Whitehorse are a husband and wife team, this night supported by a band

They also threw in a couple of covers. One was of AC/DC’s “Back in Black”, in tribute to Malcolm Young. Another was of Neil Young’s “Ohio”.

(Should have zoomed in a lot earlier than I did on the video. Not used to this taking videos at concerts thing.)

Then on Sunday, we were total hermits.