I’m not sure how many times we were asked if we were going to the Rainbow Rhythm New Year’s Eve dinner / dance. Often by the same people, multiple times.

But New Year’s Eve, for us, has traditionally been a night for consuming gourmet food, which is not exactly what’s served at the Rainbow Rhythm dinner / dance. The dance people don’t quite get that we’d rather just eat that night, nor are they generally willing to spend as much for a dinner as we are.

So what are you doing that night, instead?

To have some kind of answer, fairly early on I’d booked an 8:00 dinner at The Berlin for New Year’s Eve night. Figured we could cancel it if something better came up, but at least we’d have somewhere to go that night if not. We’d been the previous two years and found it pretty good.

But The Berlin experienced a shakeup earlier this month: Founding chef, Jonathan Gushue—who’s become a bit of a celebrity—decided to leave. He’s headed back to his native Newfoundland to be head chef at a high-end restaurant on Fogo Island. In his place they’ve brought in Ben Lillico, who is all of 23 years old (and looks about 18). Despite his youth, though, he does have some great experience, including a stint at Langdon Hall.

Without intending it, we ended up trying Lillico’s cooking just a few days after he started at The Berlin—at the admittedly easier meal of brunch. Brunch there includes your choice of hot items from the kitchen, along with the buffet table, and we were very happy with the meal.

We had to figure out how to get there and back, since they were offering wine pairings (for $50), which meant that we both planned to be drinking. We tried to reserve taxis, but the local companies don’t take reservations for New Year’s Eve night. Over the Limit (who drive your car home with another car following) were already booked up. We figured Uber’s surge pricing would make that a pretty expensive option.

And so, despite it being -19C that night (air temperature, no wind chill), we took the bus. Buses are free on New Year’s Eve, and Grand River Transit has this very good route planning thing that tells you exactly how to get from point A to point B, including all walks and bus transfers involved. We bundled up, and darned if the buses weren’t exactly on schedule the whole way, such that we arrived exactly when Grand River Transit said we would, at 9:12 pm. 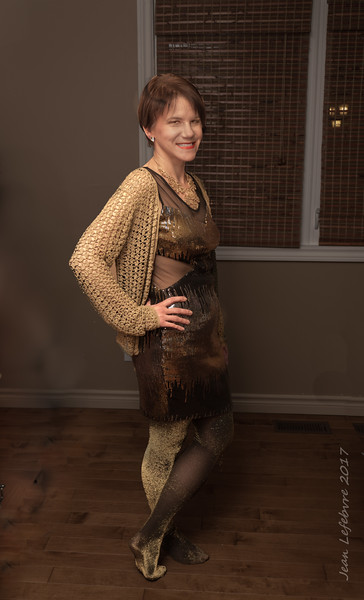 Me before I had to put on the parka, toque, winter boots, and mitts in order to walk 11 minutes to the first bus stop

We had a short wait before our preferred table, facing the kitchen, was ready. As we sipped our bubbly, Jean noted that the entire kitchen staff seemed to have changed. We asked our waiter about it later, and he confirmed that when Jonathan said he was leaving, pretty much everyone else in the kitchen gave notice, too.

But the fact the crew had only been together for three weeks by this point did not show in any stumbles in either food or service. Really, I think this was the best New Year’s Eve dinner we’ve ever had at The Berlin.

The amuse was bay scallops escabeche (we asked, and it means cooked in an acidic mixture) with pickled root vegetables and crème fraiche. The seafood had lovely flavor and texture. Next up was this lovely item: 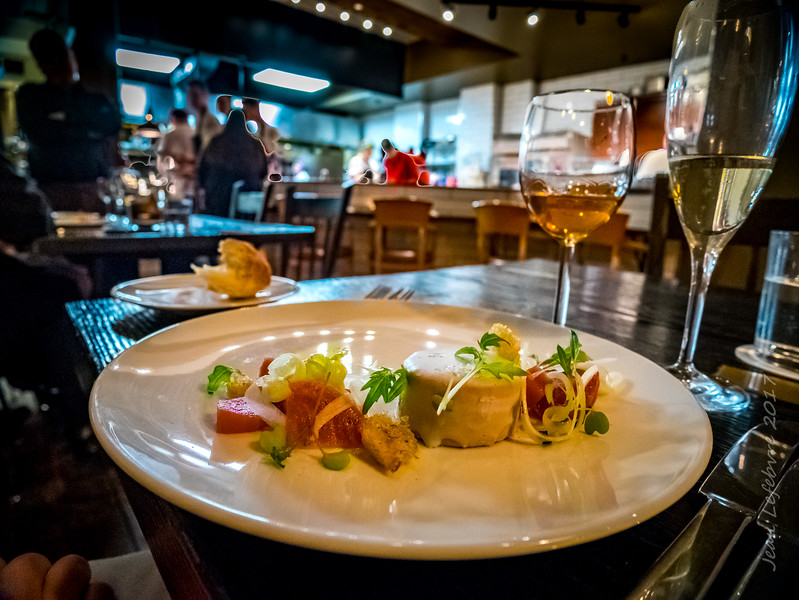 Which was a foie gras terrine with beets and celery. Rich and fantastic. It was served with 2 oz. of Southbrook Farms Whimsy, which is a sherry style drink. It made for an effective contrast with the foie gras. 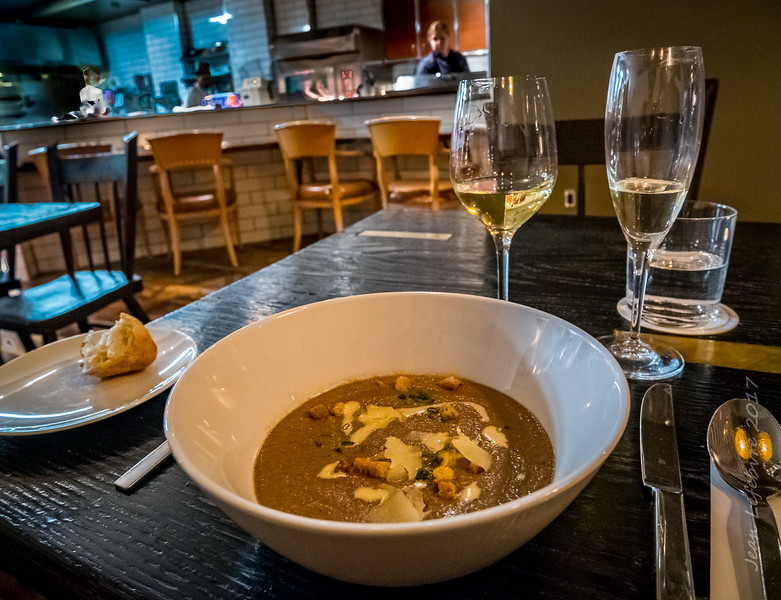 The incredible truffle mushroom soup was also served with a contrasting wine, a Chablis from Burgundy. Not a match I would have thought of, but it worked really well. 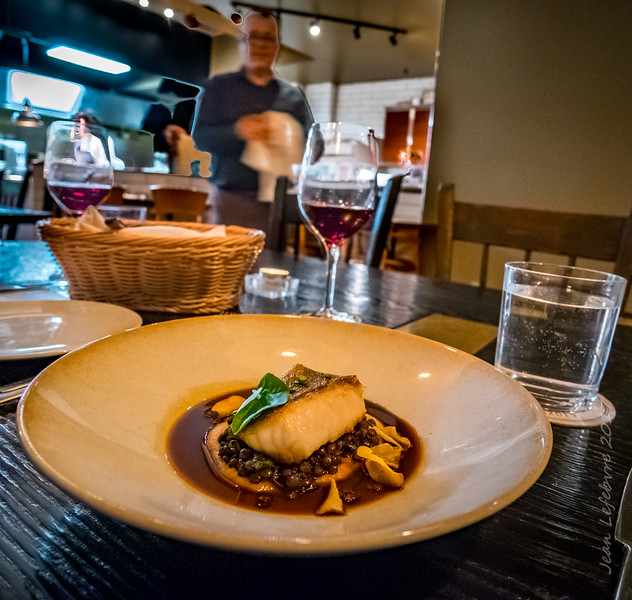 The ling cod served next was fine, but the highlight of the dish was actually the mashed sunchokes, as set off by the lentils and smoked pork broth. The wine here was a delicious 2015 Sangiovese, light enough to not overpower the fish but picking up on the smoky flavors.

We had a pear palette cleanser next. 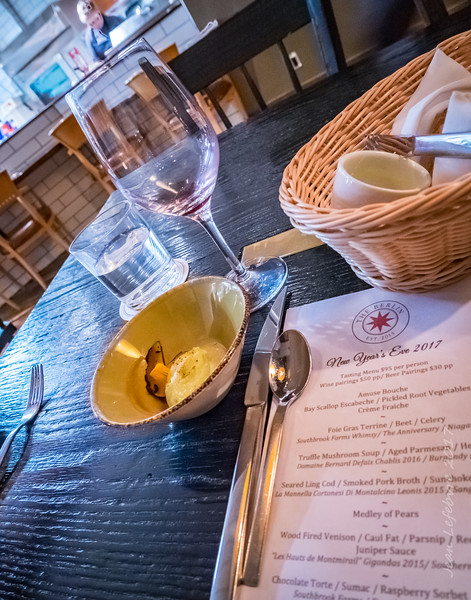 And the main course was venison prepared in caul fat, which (we asked) made it extremely tender and less “gamey” tasting than venison normally is. That was served with roast parsnips, onions, and juniper sauce. The wine served was a bigger red, a Gingondas from the Southern Rhone. 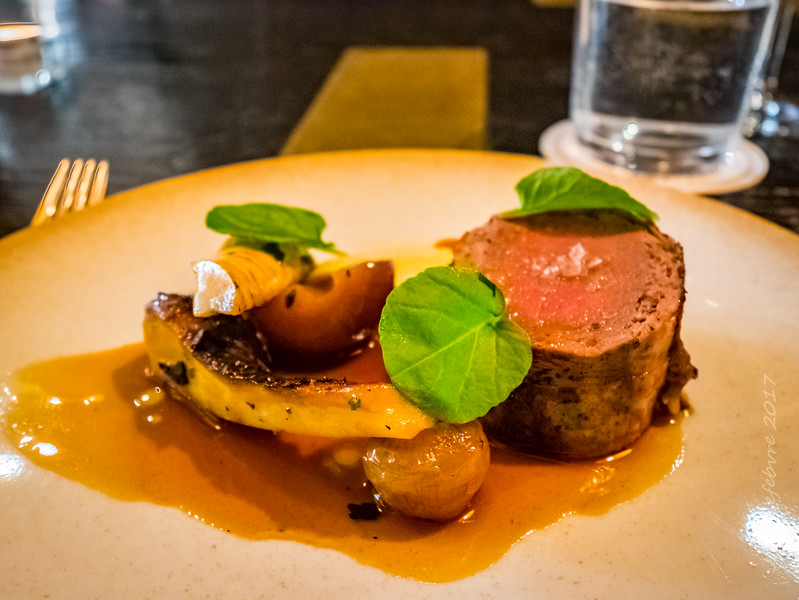 That left dessert, which was this absolutely incredible chocolate torte with raspberry sorbet. It was served with Southbrook Farms Framboise, a raspberry wine that is very well suited to chocolate.

We managed to finish up somewhat before midnight, which meant that we got through to the taxi company with no delay. (There was no suitable bus route back home at this time of day.) That also meant that we rang in the new year while still in the cab, but there you go.