Swine and Vine is relatively new restaurant in Kitchener, located in the space vacated by Public. After a pretty positive review in the Waterloo Region Record, we decided to try it for ourselves.

The focus here is on wine and charcuterie. We were told that they change the wine list monthly.  All the menu items are intended to be shared between two people (so not a great place for solo dinners, I guess) and the advice was that ordering one starter, and one charcuterie board, generally provided enough food.

The place is small, and was not overly busy on this Saturday. We liked the musical soundtrack, but even more the fact that it wasn’t too loud; no need to yell at our dining companions to be understood.

And (hurray!) we really enjoyed the food.

To start, we shared the Peking duck crepes. These did feature some vegetables Jean isn’t overly fond of, but the duck itself was delicious, and he was able to eat around the onions and cucumber. I had a glass of Spanish Syrah / Grenache with that, while Jean had a lovely French rose. 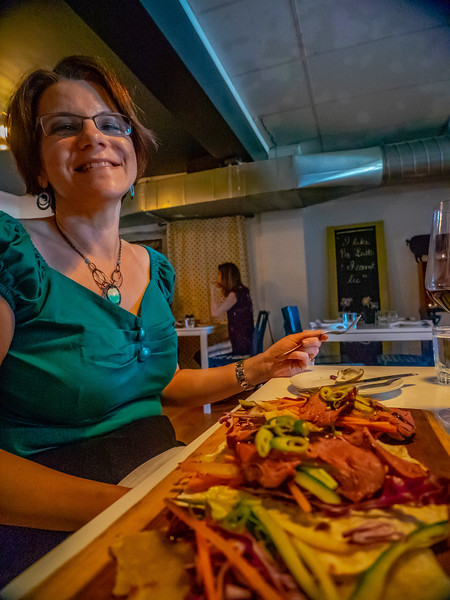 An appetizer built for two

Our friends ordered six oysters to start, but were only able to get five—the kitchen ran out. That also meant that we weren’t able to get the oysters normally included on the “Octopus’s Garden” seafood-focused charcuterie board that we ordered. We were able to substitute any other option, and went with chicken liver paté. Our friends selected the classic OG board.

Two boards, one land, one sea

The seafood one included ceviche, lemongrass curried PEI mussels, sous vide octopus, trout pâté, gravalax, and fish cakes, which were served with breads, chips, and vegetables. Every item, truly, was very good (though the ceviche again included the cucumber / onion less favored by my dining companion), and as you can see, you get a generous amount of food. And our friends were just as happy with their choice. 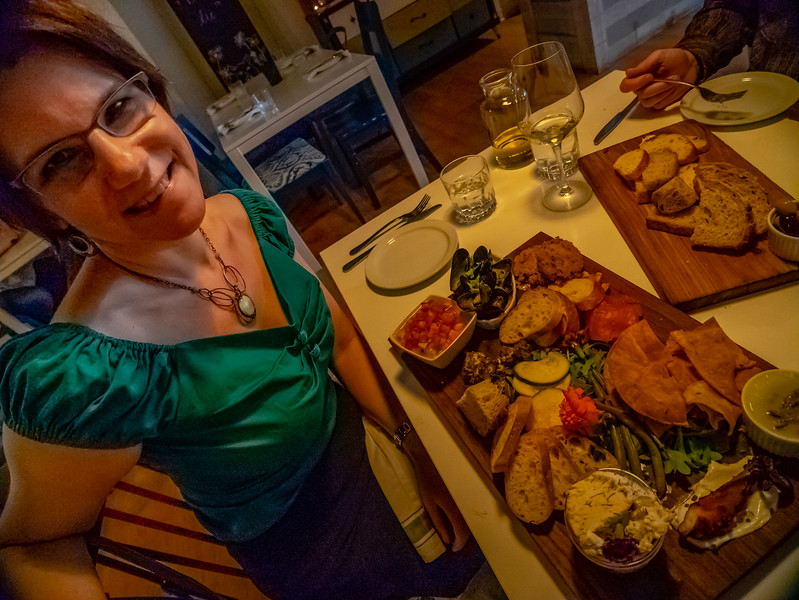 Another view of the board, by a better photographer

With that, I drank a glass of Ontario Reisling, while Jean went with an Austrian Grüner Veltliner.

The restaurant wisely offers small-size desserts—small enough that you wouldn’t necessarily have to share them. But each couple did, all of us going with the lightest-sounding option on the menu, the lemon soufflé. It was a lovely custard, served in two hollowed-out lemons.

Jean might not be happy that I cropped his photo here, but I was kind of tired of pictures of me

This was the best seafood dinner we’ve had in this town for a long time. We will be back!