Whereas our last vacation took place in the comfort of declining case numbers and the ease of doing activities outdoors, this time, case numbers were steadily increasing, and it was Fall. The need to use vacation days remained, however, and the idea of just staying home for a week wasn’t that appealing. Road trips remained the only feasible option, but to where?

At one point we were to head north for a wedding, but that all changed when the private gathering rules changed to a drastically reduced number, such that we were no longer invited.

We instead settled on Ottawa, followed by the Kingston area. Ottawa had became something of provincial hotspot for cases (Code red: Ottawa reaches highest level on pandemic scale), but we stuck with it anyway, using the following chart as a guide to what activities to do (hike, stay at a hotel, visit museums), and not (meet with friends, go into a bar).

END_OF_DOCUMENT_TOKEN_TO_BE_REPLACED

After hearing reports like the above for a couple of years now, ith our Ottawa leg, we decided to give this Air Bnb thing a whirl. We wanted a place close to downtown, that would be self-contained, and cheaper than a hotel (or why bother)? We picked one that met those qualifications and otherwise seemed OK, per photos and reviews.

We got there and… Well… It sure was a contrast to the Château Frontenac in Québec City.

The place was kind of… run down. Creaky, uneven floors. What looked like a hole punched in the wall. Water pooling at the bottom of the fridge. Trash strewn around out back. An electrical outlet of dubious safety. And we could really hear the next-door neighbours.

On the other hand, it was basically clean, we spotted no insects of any sort, the location was very convenient, it had a strong the wifi signal, and after a visit to the Byward Market to add fresh fruit and Montreal-style bagels to our arsenal of produce from Ile d’Orléans, we made ourselves the best breakfasts of the trip.

Still, now I have an answer when people ask, why would anyone stay in a hotel anymore? 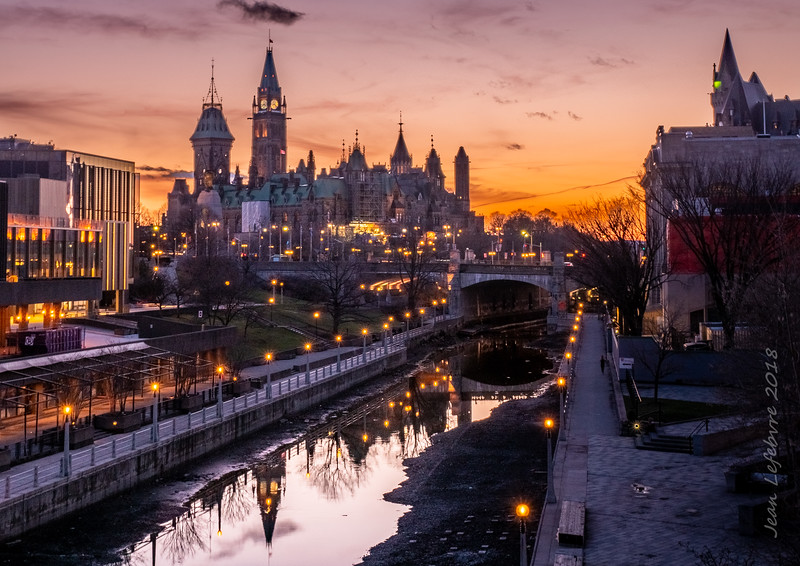 Unlike our accommodations, Ottawa looked very regal while we were there

Our first Ottawa dinner was at Fairouz, a restaurant specializing in high-end Middle Eastern food. It’s a smallish place, and somewhat noisy, but with very good service. We had with spicy olives, salmon pastourma, lamb kofte, and date cake for dessert. It definitely was a step above your typical Middle Eastern food—but that type of food still isn’t our favourite.

We then had to decide what to do with ourselves in Ottawa, a city we visit rather more often than Québec City. We decided to give the Museum of History another chance, now that the Canadian History Hall was open. They also had a special exhibit on The Franklin Expedition that was of interest, especially since we’d been watching AMC’s The Terror.

The walk to the Museum of History

The Franklin Expedition exhibit was really terrific. It was interactive and laid out in a way that gave a good sense of what the men went through. The bit about the recent discovery of the two lost ships was featured less than I expected it would be, but it was featured.

The Canadian History Hall, which is on two floors, is also really well done. It starts with Native history and their story gets included throughout, much more than if this Hall had been put together a decade or so ago, I suspect. We then get the stories of the French explorers and settlers (and the Filles du Roy), the Acadians, the United Empire Loyalists. We revisit Confederation, Louis Riel, the building of the railroad. Exhibits continue on to more current events: the world wars, Expo 67, Trudeaumania (the first), the two Quebec Referendum, the October Crisis, the legalization of gay marriage, the Idle No More movement, and so on.

It was all very interesting, and we ended up spending far more time at that museum than we’d expected to. At one point we took a lunch break to eat at the fairly indifferent (nowhere near as good as Apsara) Thai restaurant across the street (the Green Papaya), then headed back. We were there til 3:30.

The day had turned lovely, so we then did some ambling about Ottawa. I also stopped off at clothing boutique near the Air Bnb, featuring local designers. I tried on a number of items and did end up purchasing a pretty cute little black dress (about $120). 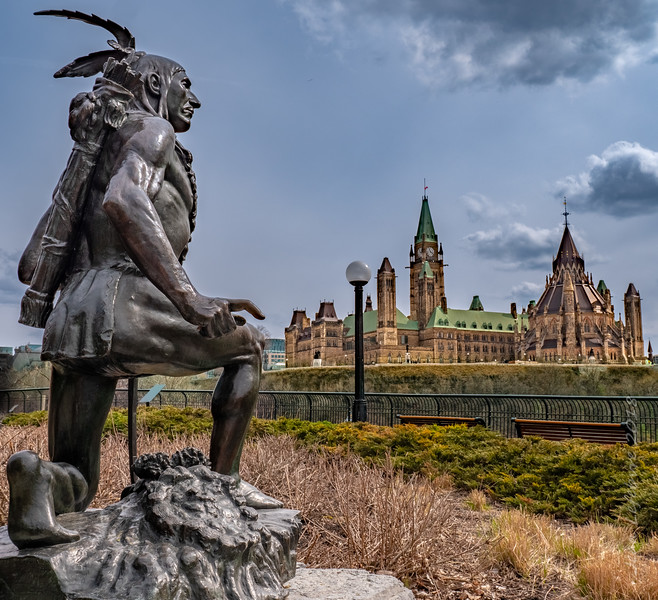 For dinner, we met up with some friends at Play Food and Wine. The service was a bit error-prone: a cheese plate including blue cheese despite an allergy having been reported to that very thing; duplicated dishes arriving when different dishes had been ordered. But everything got rectified and we did enjoy our various small dishes, though nothing especially stood out this time.

Saturday was predicted to be rainy, but in the end, less rain fell than expected. We started the day at National Gallery. It was partly under construction, and featured no special exhibits, but we hadn’t been in a few years, and so just enjoyed the regular collection, particularly the European and American works.

We then had a decent lunch in the Market area, resisted the offerings at the Poutine festival on Sparks Street, and did some shopping around the Bank street area, mainly picking up books and magazines (like, on paper!). The independent coffee shops all seemed to be overflowing with patrons, so made our way to Starbucks at the Chapters.

Our final dinner of the trip was at the Beckta Wine Bar, and it was quite lovely. We started with some oysters, and both had the Parisian gnocchi (ricotta, asparagus, pine nuts, peas), which was worth doubling up on. (I suspect we had dessert as well, though I can’t remember what, now.) Service was very good (not error-prone) and helpful with the wine matching.

A nice ending to this leg of the trip. Then it a blessedly uneventful drive home on Sunday (during which we didn’t quite finish Ready Player One).