Our next destination after Prince Eward County was Québec City—currently branding itself as l’accent de l’Amérique, which is kind of clever. The 6-hour drive there seemed rather long, and a bit of a waste of another nice day, but we passed the time listening to the audiobook of Ready Player One, a fun, near-future sci-fi novel recently turned Stephen Spielberg movie. (The audiobook was read by Will Wheaton, which made one detail in the novel especially amusing.)

Guess what was playing in Picton while we were there? Didn’t see it, though; didn’t want to spoil the book

We had booked a room at the fancy and historic Château Frontenac, which was having anniversary specials. So we had the door man, and concierge services, and a great, central location. The room was just one of their “basic” ones, but it was still a good size and comfortable. 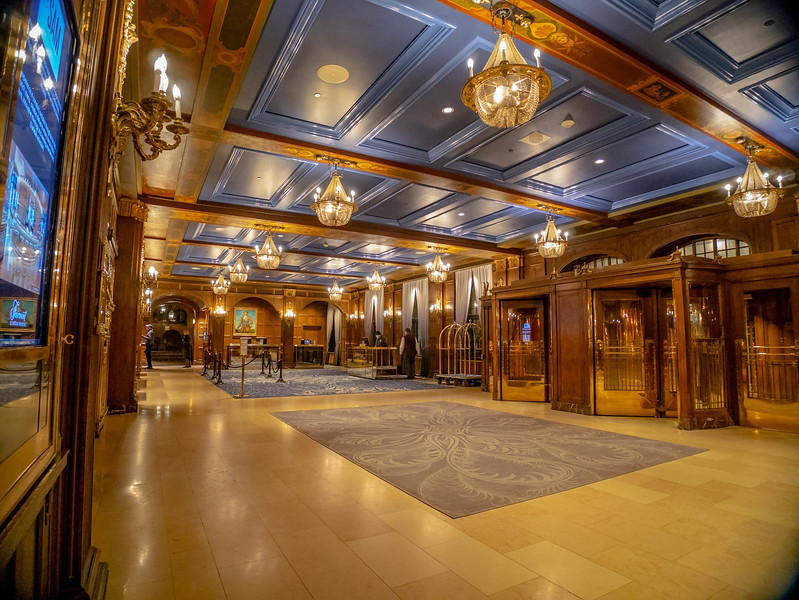 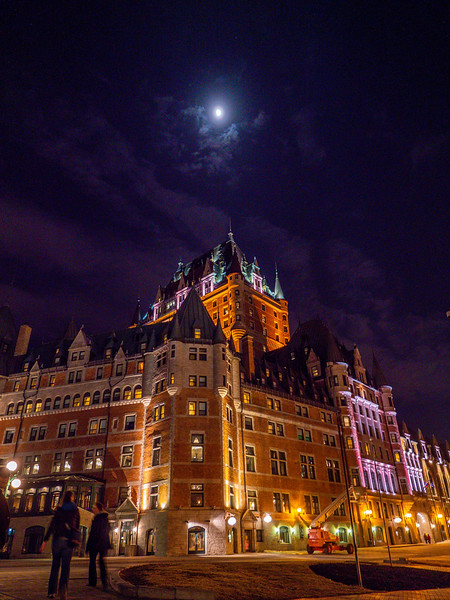 And the outside of it. It’s huge! You can get lost in its corridors.

We had wanted to have dinner at Toast, but—cue the jokes—Toast was closed due to fire. So we booked (or really, had the concierge book for us) at their sister restaurant, Simple Snack Sympathique, or SSS. We found it just as delightful as we remembered Toast being, with creative food combinations and lovely presentation. I had the Québec Exquis special, which was a prix fixe of three courses all incorporating maple syrup in some way. (Québec Exquis was a one-week period in which Québec restaurants featured three-course, prix-fixe menus built around items from québecois food producers .)

First up for me was snow crab, then duck (the maple sauce was amazing), then maple éclair. Jean went with the regular menu for foie gras, smoked pork, then fromage fermier (farmer cheese!) for dessert.

Tastes as good as it looks

We enjoyed a selection of wines from the Languedoc region with that—also part of the Québec Exquis special. (By the way, we had no idea before leaving that all these restaurant specials would be on.)

Jean took to getting up early for photos, while I had more leisurely mornings. Worked out for both of us.

How the world looks to morning people, apparently

Our first full day there, after a joint breakfast (not at the hotel), we walked down rue St-Jean, the shopping street outside the Old Town. This time we didn’t find too many treasures worth buying, though: just a bargain-priced collection of sheet music, for me.

We’d never been to Ile D’Orléans before—an island about a 30-minute drive from Québec—and had been planning to visit it this trip. But after driving around Prince Edward County, which is nearly an island, visiting various food-related destinations, we weren’t sure if we wanted to get back in the car and do the same here? On the map provided by the hotel, though, I noticed that there were bus tours we could take to the island. So we signed up for La route des saveurs, starting at 2:00, and running for 2.5 hours

Joining us on the tour—which started right at our hotel—was a friendly couple from Carolina, on an anniversary vacation, and two young women from South Korea, in Canada for what seemed like an absurdly short time for such a long trip. We found out that a popular South Korean show was filmed in Québec City, leading to an increased number of Korean tourists going there and looking for the “red door”. (CBC story: How a popular Korean soap opera is drawing Asian tourists to Quebec City.)

Not the red door, but still a cool shot of Old Québec

Our guide was a lively young man with an enthusiasm for both Québec and the culinary products of Ile d’Orléans. Being early spring, with snow still in the fields, the island landscape wasn’t as lovely as it presumably becomes when plants are in bloom. So, we don’t have too many photos from this part. But, we did enjoy the tastings at each stop.

All that eating did not stop us from going out to eat later! We went back to an old favourite, Thai restaurant Apsara. We had one of the set menus that is a real bargain, even when we upgraded the included wine to be a Blanquette de Limoux. Each course was fresh and delicious. And the ladies got a lovely change purse as a gift at the end.

The next morning we spent more time wandering in the Old Town, as we’d previously been rushing through it.

The afternoon we spent at the Québec Art Gallery, which has only modern and contemporary works. Our favourites were the Inuit sculptures, which were just amazing. The building was formerly a prison, and we also had a look at the old cells. Not big!

One of the exhibits at the Quebec Art Gallery. (Photo by me, hence the blurri-ness.)

Our last dinner in Quebec, on a somewhat rainy evening, was at Le St. Amour. We’ve always loved Le St. Amour. It’s in this gorgeous, high-ceiling roomed with a sunroof. And the food is always amazing. It didn’t disappoint this time, either.

We started off the evening trying to work in French—French menus, speaking French to the waiters (an ongoing amusement of the trip was Québecois complimenting Jean on how good his French was, for an Ontario. Well, I hope so.). But we detected a bit of an anglo accent from one of our waiters—bit unusual in these parts—and it turned out he was originally Australian! And still had that accent in English.

L’amuse bouche at Le St. Amour. Or as they call it in English, the amuse bouche. (Food just sounds better in French.)

So he was happy to English-it-up with us, and then we were hopelessly back in English-land with everyone, with even the native Québec waiters. Oh well!

This part will come as a shock to you all, but I had the Québec Exquis special, while Jean ordered off the regular menu! For me this meant a main course of escargot and Jerusalem artichokes, a main course of duck, and a chocolate mousse-themed dessert. 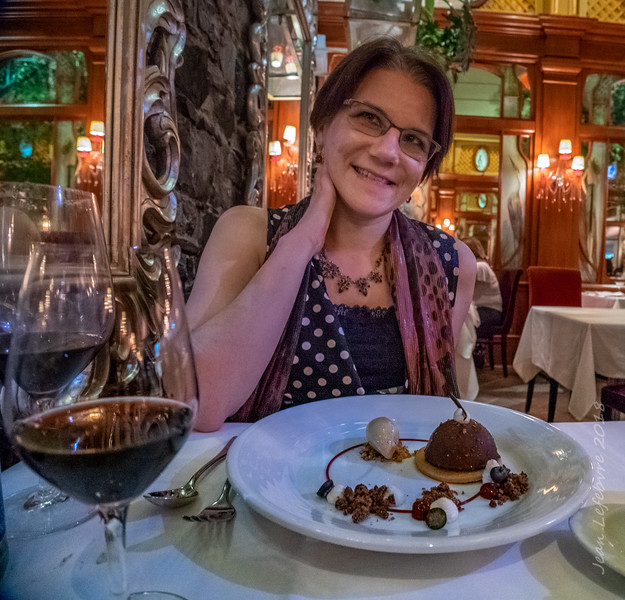 Jean started with foie gras, then had a lamb leg and ground lamb ravioli, and concluded with a cheese plate. We shared a bottle of Languedoc red, a Grenache-Syrah blend (no Mourvedre). With dessert I had a red banyuls (“a little French love letter to chocolate”, is how this wine is described) while Jean was recommended a sherry, which he enjoyed.

A great capper to a very enjoyable visit. Our next stop on the way home was Ottawa.