While I realized that some of the herbs I planted were perennials that would therefore come back the following year, I didn’t realize they’d come back as giants. The oregano and marjoram are sprawling, with much bigger leaves than last year. And the tarragon: I had no idea tarragon could get so tall. I wasn’t even completely sure it was tarragon at that size until I chopped it up for a recipe, which produced the distinct scent and taste of that herb.

But what I still have the most of, again, and now in a much larger size, is sage. It’s a virtual pasture of tall, stately plants with enormous. And as I’ve complained before, there are only so many things, culinarily, one can do with sage. Sage is not the parsely of herbs. Parsley is. (And parsely, sadly, is recently replanted annual that currently looks like a baby plant in there, fighting for a bit of space.)

And then… The sage started to flower. I don’t know if it just didn’t do that last year, or if it was diligently removing the flowers as they appeared in an attempt to get more leaves (not realizing I’d soon be overrun). But this year I let it be and… Wow. Sage is so pretty. (The tall leaves in the front-most of the image? The giant tarragon.)

And the bees just love all those flowers, and we’re supposed to encourage the bees. And yes, flowered sage does have fewer leaves, but with that number of plants…. Really not an issue. Plus, after I cut them and use the leaves in a recipe, I have a ready-made centerpiece for the table: 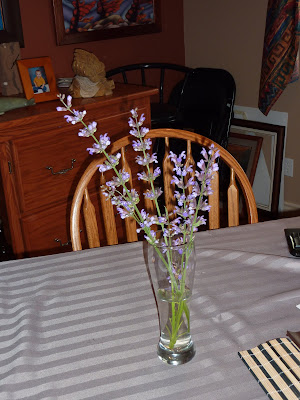