For the many times and occasions we’ve been to Verses Restaurant over the years, we’d never tried the Chef’s Table experience. This is where you get a multi-course menu surprise. We were deterred by the cost, and the fact that it requires an eight-person group. We got around the barriers by a) budgeting for it and b) Verses being kind enough to make an exception for us, so we were able to proceed with a group of six.

At a Verses Chef’s table, you actually do sit downstairs, in a little room just outside the kitchen, rather than in the main dining room. It’s very quiet and intimate and you feel very special. Especially given that you also get your own chef and sommelier for the evening, who have a created a menu just for you, with matching wines.

The table looked a bit intimidating at first, with each place set with six forks, six knives, and six glasses of wine, but with the rule of working your cutlery from the outside in, we were ready to go.

When the first item was brought out, the chef joked that while they used to start with the smallest item and proceed to the larger courses, now they were starting with the largest and it would all get smaller from here. Because this was the amuse, which was a single scallop on a sorrel leaf with lime and olive oil garnish (and I’m officially not going to remember all the details of all the garnishings). It was really delicious, and we definitely could have eaten more of those.

The wine poured next was a French Sauternes, a sweet wine, which gave us a clue what our appetizer might be: le fois gras. This particular item was inspired by someone at our table (not Jean) who had once ordered foie gras for dessert. So this was kind of foie gras as dessert: the seared meat accompanied by a cone of foie gras ice cream (which you can’t really see in the photo) and local strawberries with pea tendrils. Very exciting for me to have my own foie gras at Verses instead of just tasting Jean’s, I must say! 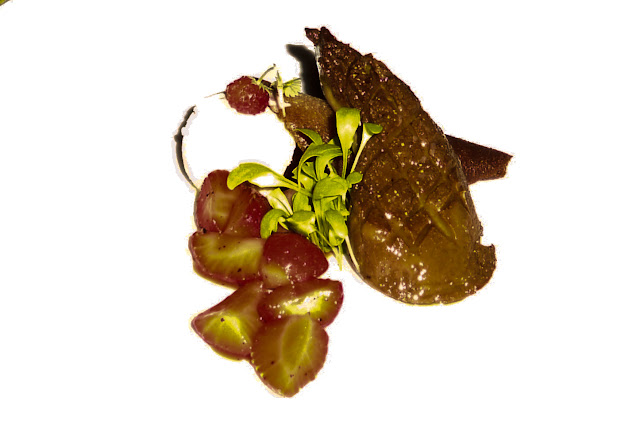 Appetizer numéro deux was the Verses version of a Clubhouse sandwich: crisp homemade bread spread with tarragon mayonnaise,  then topped with pancetta bacon, local tomato and lettuce, and rabbit. All quite delicious, with the tomato actually being the highlight! There is simply nothing like tomatoes in season. That was served with a very nice, lighter-style California Pinot Noir. 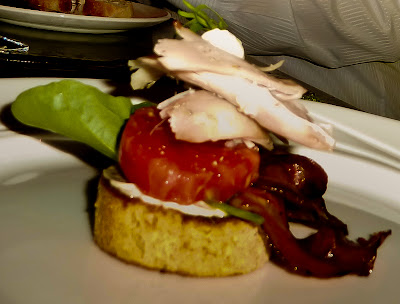 I should mention here that they would bring the food and pour the wine first, and then explain what it was. So in this time we would amuse ourselves trying to guess what things were. The previous dishes weren’t a huge challenge, but the next meat was a puzzle: Was that duck? Quail? Also a mystery was the white foamy stuff. We could only identify the crisp polenta.

Turned out the mystery meat was “squab”, otherwise known as “pigeon”. Something I’ve never seen on a Verses menu before, though I have eaten it previously. It was delicious. The white foam was fennel-based. And the polenta was so good, I’m thinking I should try making my own. The accompanying wine for this was a Shiraz that was not too over-the-top (meaning, not so big and fruity that it dominated the food). 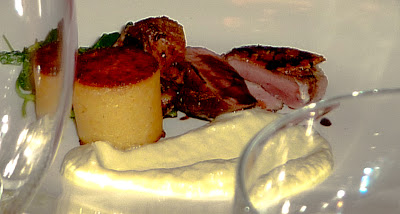 The next wine was a real stumper. It was a bubbly, but definitely not Champagne or prosecco. It was very good and refreshing, but not quite like anything I’d tasted before. Except maybe sake, but that isn’t bubbly, and I’ve never liked sake.

But that was it. It was sparkling sake (served cold). Something I’d definitely try again. And it accompanied our seafood course, which was tuna two ways: Seared and tartar. The dish included some fresh wasabi, which is much tamer than its in paste form (like you get in sushi restaurants). It was served with a sesame seed-crisped rice side that was very interesting (in a good way). 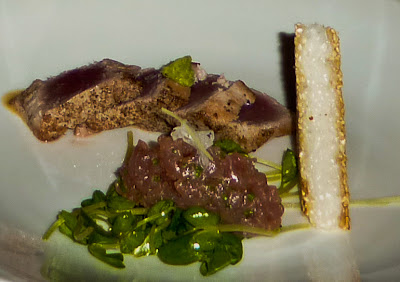 We thought we had reached the dessert course, so when this next item came out, it seemed a bit smaller than expected. But it turned out to just be the palette cleanser, a lovely sorbet, more refreshing and citrusy than sweet. 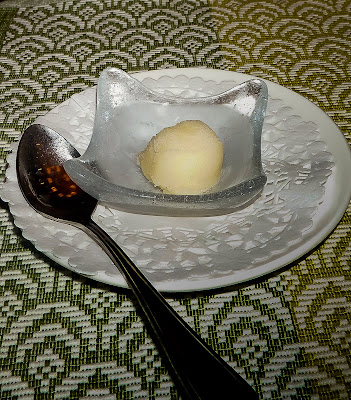 Because then we had our final main course: Wild boar (lamb for one person) with a variety of vegetables, including sweet potato mash and zucchini. Everything was perfectly prepared—and this may have been my first experience eating wild boar—but I have to admit this is the one course I couldn’t quite finish. It was served with a California Zinfandel, a suitably big wine for this food. 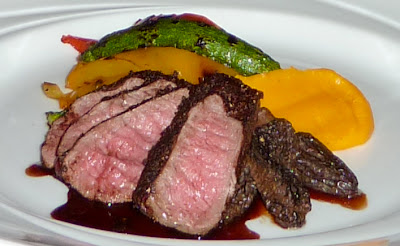 But it’s true what they say: There’s always room for dessert. Especially if you’re me, and the dessert is chocolate. Specifically, a deconstructed black forest cake, with the cake, the whipped cream, the macerated cherries, and a chocolate sauce all served side by side. That, I polished off. It was served with an extremely smooth and delicious port. 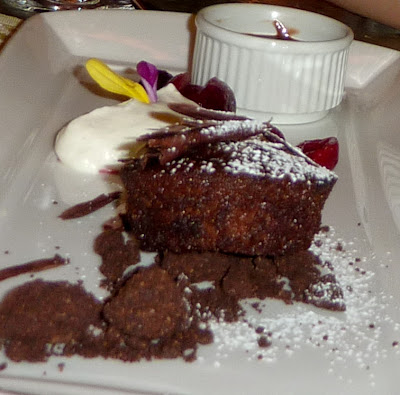 And these were the wines. The Zipang is that sparkling sake, and only one of the Shiraz’s were part of the pairings. 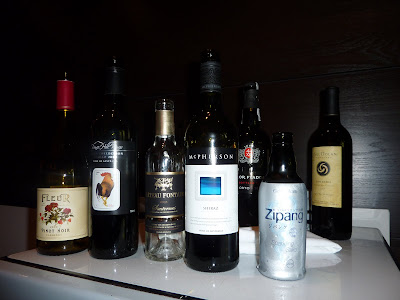