Yes, it’s true; a mere 5 days after our big Chef’s Table dinner at Verses, we found ourselves at Nick and Nat’s Uptown 21 for five-course wine dinner. This one had actually been booked before, and though I noted that it made the proposed timing of the Verses dinner less than ideal, I was overruled. I suppose there are worse fates than having two multi-course gourmet meals close together.

Of course, we weren’t the special guests this time; just three among many at the sold-out dinner featuring wines from Rosewood Estates. As always, the restaurant was too loud, but we were seated nearer to the back, with no table beside us, making that fact less annoying.

The first wine on tap was the 2009 Sémillon, which would prove the favorite for Jean and me. Though I expected a fresh dry style, it actually had a sugar level of 1, and was very pleasant. Our first course was described as:

We were presented with a single large spoon of what looked like mixed veggies. Not sure where the scallop was in all that, we concluded it must be mixed in there.

But we were being dumb. That was just the amuse. The first course actually looked like this: 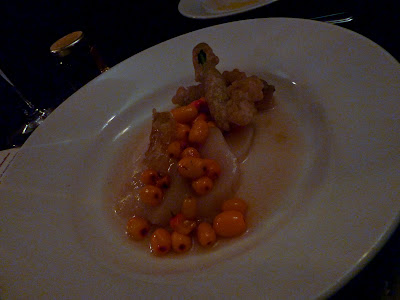 The raw scallops, though it seems as though that should be gross, are quite delicious. The sea-buckthorn berries, a first for all of us, were quite tart, with an interesting texture. The green onion tempura was just delicious; possibly the highlight of the dish. And it included a piece of Rosewood winery honeycomb (they also have bees and honey at that winery), that was soft and blended nicely with the tart berries.

The next wine was the 2009 Natalie’s Sussreserve Riesling. The winemaker was there, and explained the process of making it, which is an unusual one. To quote the website:

Some juice is kept separate and stays unfermented. The rest of the Riesling juice is fermented and made into a finished wine. Just before bottling the unfermented Riesling juice called “süssreserve” is added back to the wine to add complexity, character, structure, natural acidity and of course sweetness.

We’ve really enjoyed other vintages of this one, but we found the 2009 vintage to be merely good, not outstanding. It was served with a composed salad with two warm Quebec cheese, house mustard vinaigrette, and bread crumbs. 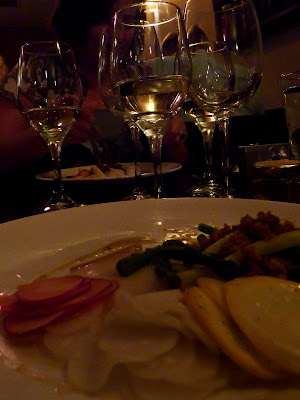 The veggies included radishes, which aren’t normally my favorite, but are improved by proper cooking. It also included asparagus and beans, both which I love. The two cheeses (I don’t think we found out what they were) were very good.

Then on with the duck course, which of course means Pinot Noir—this time, the 2009 vintage. Rosewood’s 2007 Pinot was amazing, and their 2010 should have potential. But 2009 was a cooler summer, which means the much lighter style of Pinot. I like that too, but it doesn’t have the same wow factor. 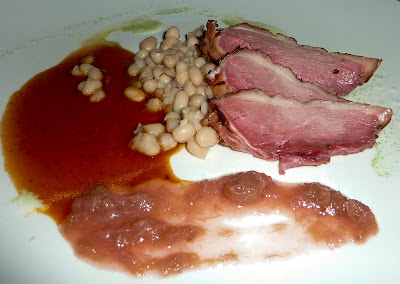 This wasn’t what I was expecting when I read “duck bacon”; it seemed more like smoked duck. Not that there’s anything wrong that. The navy beans proved a nice accompaniment, and dipping the duck into the sweetened rhubarb worked well.

They had really been building up the next wine, the 2009 Johnny Bower Merlot. Only a small batch is available, very little in restaurants, so it was special that we were all getting some. And there was a whole story behind its making, related to hockey player Johnny Bower (which didn’t mean anything to me, but may to you). The taste? Quite nice, really. Our second favorite. Nice and rich, but not overly so. Pretty smooth.

It was served with a beef ragu with cavatelli dumplings, sweet peas, fried shallots, and pickled green onions. 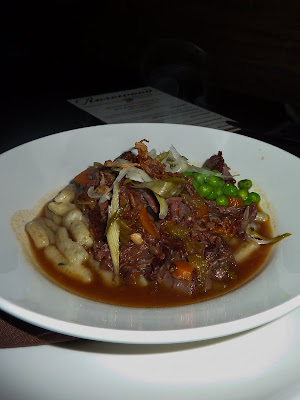 I’m not sure what texture cavatelli dumplings are supposed to have, but I really liked the texture of these, with some firmness to them. The Ontario peas were amazing. The meat was extremely tender and in a very nice, slightly sweetened, possibly tomato-based sauce. But, we were still of some opinion that beef is not really the best choice of meats for a foodie dinner. (Neither is chicken, just for the record.)

And on to dessert! The wine was the honey-based mead royale, which is a cool choice. The dish included strawberries (fresh and stewed), honey-goat milk ice cream, and a rosemary sugar-dusted doughnut. 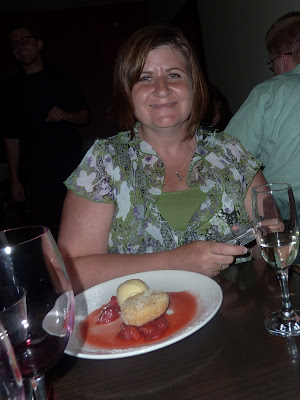 Nick generally makes good doughnuts, and this one was no exception. There’s also no complaining to be done about Ontario strawberries and homemade ice cream.

So all in all, it was a good night out. The meal (including wine) was $85 plus tax and tip.

3 thoughts on “You ate out again?”