Going in, I had mixed feelings about this one.

Of course, there was no way I would miss seeing The Who performing one of my favorite albums in nearby Toronto. But despite the mostly positive reviews of the tour (the only exceptions being from those boomers who, far as I can tell, mainly resent The Who for no longer being 25), I wasn’t sure how much I would enjoy it. I thought that:

We weren’t exactly down front this time…

The date would also prove to throw up a few other challenges. When I bought the tickets back in July, I didn’t know that would be bringing me to downtown Toronto on Grey Cup weekend. That made for some incredibly inflated weekend hotel prices! And just a wee bit of extra traffic.

But it all turned out better than expected.

We were actually staying (without intending this at all) at the “official Grey Cup hotel.” Which, yes, it was pretty crazy with people there. But they were a bunch of really happy people! And it’s not every day you see the Winnipeg pipe band playing and marching in your hotel lobby while blue-haired Argos fans and cowboy-hatted Calgary fans look on. It was weird, and definitely seemed that my Who T-shirt was the wrong uniform to be in, but it was entertaining.

And all my concerns about the concert evaporated really quickly as well:

But we could still see

I do want to pause for a minute and acknowledge that opening act Vintage Trouble were fantastic. Led by Ty Taylor—most famous as a former contestant on Rock Star: INXS—they were energetic, engaging, and charismatic, and Ty’s signing voice remains a miraculous thing. Their half-hour set was tons of fun, and I’m going to pick up a few more of their songs. They earned a standing ovation.

As is typical, not everyone showed up for the opening act (their loss) but by the time 8:30 rolled around, that stadium looked really packed—more than I expected, really, as I didn’t think it was a sellout (and maybe it wasn’t, but it must have been close). And once again, I had that feeling that the people of Toronto really love The Who. They may have been average age 50 (I’d guess), but they were as enthusiastic as teenagers.

Another killer Who show. Toronto crowd are loud – like a home crowd. Where to next? Detroit, Minneapolis, Chicago…

Apparently the original Quadrophenia tour was a bit of a mess, the band not having been given enough time to prepare for a live presentation of that complex music. The 1996/97 outing (which I have on DVD) featured a narrator telling the story of Jimmy the Mod. This one returned to another central idea of Quadrophenia: that it represented the band itself, aspects of the four very different personalities in The Who. So it was presented, sort of, as today’s Who paying tribute to their own past.

Earlier in the show; Roger still in jacket

They played the album straight through, no narration, not even pausing to talk to the audience. But throughout, they used the five large screens behind them to either illustrate themes of the songs (a lot of water imagery—don’t see this show on a full bladder) or show scenes from that time. (Along with showing what was happening on stage, of course.) Often the scenes were of their younger selves. For example, during “The Real Me” and “Cut My Hair” were scenes of the very young mod Who at the tiny clubs they originally played at.

During “The Punk and the Godfather”, the song where Jimmy is angry that The Who have become so famous, abandoning their mod roots, the scenes were all of the band in their glory days: Pete leaping, Keith thrashing, John being cool, and Roger as the ultimate rock God. (Struck me that seeing the younger selves on the big screen while the current members sang live was the closest someone my age could possibly get to seeing The Who in their prime. And yes, I’m grateful for the experience.)

On “Helpless Dancer”, the tough guy theme, Pete and Roger traded off lines (Pete seemed to deliberately censor himself on the “lesbians and queers” line, which was interesting) while the screens showed The Who in their destructive phase, smashing their guitars, drum kits, and microphone stands, and setting off bombs.

Most notably, of course—it’s mentioned in every review—during 5:15, the live band stops at one point to allow the big projection of John Entwistle to play his famous bass solo from the Albert Hall concert in 1997. The band was really rocking at this point, and earned their first standing ovation of the night.

Then during “Bell Boy”, Roger handed off vocal duties to Keith Moon (video image of), just like in the old days. (Here’s video of that–not by us–also featuring the fabulous “Dr. Jimmy”, which followed.) 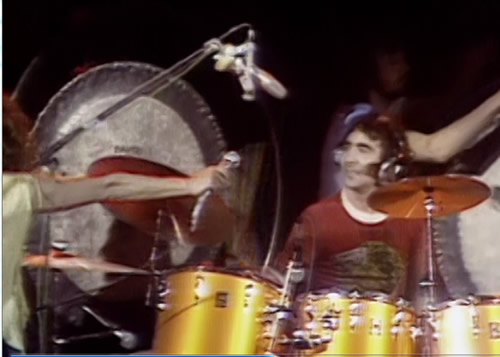 I have to say I found that part unexpectedly touching. I’m too young to remember when Keith Moon died; to me, in a sense, he’s always been gone, you know? So seeing this footage is the first time I can recall feeling sad about his passing.

During the instrumental “The Rock” (the only time Daltrey left the stage) the images ran through key points in history from mod days to now. The timing of the music to the 9/11 imagery was powerful and, again, very touching.

That led to the aforementioned “Love Reign O’er Me”, in which I was honestly astounded at how great Roger sounded on the chorus. I have to say that another thing about the hockey arena is that it really struck me how big and powerful his voice is, when contrasted with that of the Townshend brothers. Simon has a gorgeous, sweet-sounding voice; Pete’s has developed a bit of an odd growl in the lower ranges. But neither can fill the space in the same way.

“Love Reign O’er Me” produced the second standing ovation. (Video of that: Not from great seats, but does have great audio.) It was also the conclusion of the Quadrophenia portion of the evening.

The Quadrophenia portion was tailor-made for The Who geeks. It was not so good for more casual fans, such as my husband (who was very happy he at least had his camera with him, to keep him busy. He took 1500 photos!). So the “and more” part of the evening was especially for them. Pete Townshend finally addressed the audience, talking about how Toronto had always been a special place for the band. And then they launched into “Who Are You” over a fun backdrop, featuring, among other images, a Canadian flag (very astute of them) and the Argos logo!

Meanwhile, the smaller screens flitted between different band members. Who are you? Who, who?

“Behind Blue Eyes” followed (the crowd just stayed standing through this entire last part), and it was quite something to hear that many people singing along with every line. Then we got “Pinball Wizard“–and both Jean and I are quite surprised how well the video of that turned out, given the distance, apparent from the shaking:

What followed were the two remaining CSI themes, “Baba O’Riley” and “Won’t Get Fooled Again”. Complete with epic scream.

Meet the new boss… Same as the old boss

The very end featured just Daltrey and Townshend, on the most perfect song to end it on, “Tea and Theatre”, from Endless Wire. According to the Toronto Sun, they’d played for 2 hours 20 minutes. And gotta say, both Daltrey (who looks younger than he is) and Townshend (who does not) make growing older look a lot less scary, they had so much energy throughout, jokes about foot rubs and bed times notwithstanding! We should all be in such good shape at their age.

Rockers past their prime? Sure. But #TheWho last night at #ACC was one of the best concerts I’ve seen in years. Simply outstanding.