All that hiking requires a little sustenance…

Highway traffic was unpleasant on Thanksgiving Sunday, so we diverted through the Beamsville wine area. We attempted lunch at the lovely Vineland Estates restaurant, but it was full. Fortunately I had noticed that nearby Ridgepoint Wines also had a restaurant, and even more fortunately, they had room for us.

Finally time to stop and enjoy the foliage. (Though, to be honest, these are American leaves from later in the trip.)

It’s not as fancy as Vineland, but we had a nice meal there of squash ravioli and mushroom risotto, respectively, accompanied by meritage and Cabernet franc. (I tried Cabernet franc all over the place on this trip, and can now conclusively state that the Pelee region is really a superior one for that grape.) We did a little wine tasting afterward as well, purchasing of bottle of white Cabernet—something I’ve never seen before.

We’d made dinner reservations at The Epicurean near our inn, and were looking forward to a leisurely meal from their main menu. However, all they had on offer was a three-course Thanksgiving dinner. We masked our disappointment by dawdling over the wine selection, finally picking a bottle of Stratus 2011 San Giovese, which was good. And it turned out that the food was as well. We both picked the ham over turkey as our main dish, and it had lovely smoked flavor and came with terrific sides of green beans and sweet potatoes.

Furthermore, we got our fine dining experiences the next day, first for lunch at the Riverbend Inn, then with dinner at Peller Estates winery. It has a beautiful room, well-trained wait staff, a talented chef, and a menu with suggested wine pairings. We’ve often had the five-course “surprise” menu there, but this time we went with selecting from the menu. After the amuse, I had a smoked salmon and caviar with creme fraiche pearls appetizer, served with rosé. Jean selected their chicken pate served with their delicious ice cuvée (sparking wine with a touch of ice wine).

Jean then had a pasta “interlude”, a course I skipped, My main course was a delicious icewine butter poached lobster, served with Chardonnay. Jean had a bouillabaisse with a Sauvignon Blanc.

We then shared an amazing dessert of chocolate cream with freeze-dried mousse and cookies that was just amazing. And looked gorgeous. Unfortunately, our photos were lost on a damaged SIM card…

We visited two Niagara wineries for the sole purpose of wine tasting. First up was Caroline Cellars, which we’d quite enjoyed a few years ago. This time we were somewhat disappointed. None of the wines we tried were bad, but they weren’t very interesting, either. We did buy their Riesling and a rose, however.

We were more successful at the next, Between the Lines, a new winery whose description I found intriguing. They didn’t have a huge number of wines, but most everything we tried, we liked. And we were the only ones there, making for a fun and informal visit. We bought their Chardonnay reserve, the 2010 Pinot, and the Meritage reserve. And they told us to look out for lemberger grape in the Finger Lakes area… It’s common there, while in Niagara, only Between the Lines works with it. (They were already sold out.)

Dining in Finger Lakes started on well on Tuesday, with a lunch at Fox Run Vineyards. They offered wine flights along with cheese platters. We found the Riesling to be the best of the lot, but didn’t purchase any bottles here.

At dinner time, we discovered that a lot of restaurants in this area are closed on Tuesday! We rather arbitrarily chose an Italian place called Jerlando’s which wasn’t too bad, all things considered. Still, the next day we arranged dinner reservations for the remaining two nights here (once I was in cell phone range).

For lunch Wednesday, we aimed for a winery again: a repeat visit to Bully Hill Vineyards, which certainly has a nice location. 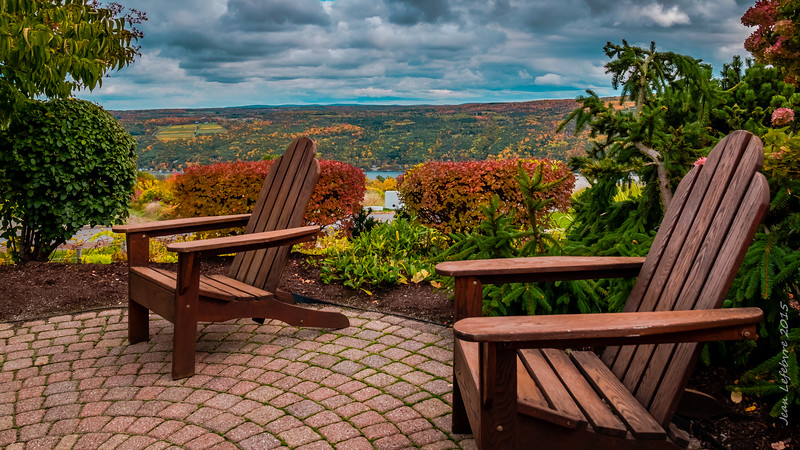 It’s not a fancy place to dine, but the food is good. With the meal, Jean had an off-dry red that is characteristic of this region, while I tried a Chardonnay-Riesling blend.

Our dinner that night was at a funky organic place called the Stone Cat Cafe, near our Inn. (Inn at Grist Iron, which was just a lovely place to stay, by the way. They upgraded us to a huge room with an extra seating area.) They had a band that night, so it was a bit loud, but good food and service. I had a smoked salmon starter, followed by a puttanesca pasta. Jean started with an olive tapenade plate, then had a mac and cheese with duck crumble. (Mac and cheese is really big in these parts… Seemed to be on a lot of menus.)

Our Thursday lunch was in Ithaca, which didn’t have as many interesting-looking eating establishments as we’d hoped. We ate at Thai place that was basically fine. (And didn’t have wine!)

Dinner, though, was at Suzanne’s Fine Regional Cuisine, which has an unusual approach: They offer nothing but a single, set five-course menu for everyone. Your only choice is whether to have the matching wines or not. (You can pick your own wine as well, if you prefer. Or just drink water. That’s allowed, too.) The approach seems to be working for them—we almost didn’t get a reservation.

But the meal there was just lovely. Slow-paced, attentive service, nice room, quiet, and very fine food through all courses. The very handsome waiter also did a really good job of explaining about each wine we got—information about the winery as well as the wine itself—and about the preparation of each course. Next time out, we’re definitely going to have to visit Hector Wine Company, as their Pinot Noir just blew us away. We also quite enjoyed the two types of Rieslings we had. 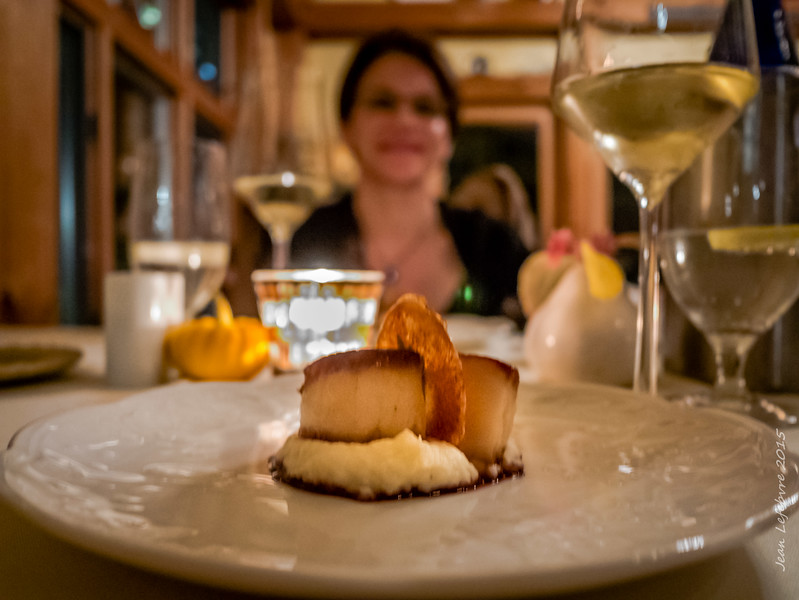 They change their menu weekly, but we got:

Tarte tatin like you’ve never seen it before! I wasn’t pleased with this at all! 🙂

Dr. Konstantin Frank is one of the oldest and most renowned of the wineries of the region. When we got there on this trip, we recalled that we had stopped in here before, but had left because the wine tasting lineup was so long. That wasn’t a problem this time (on a Wednesday); we were ushered right in to start a tasting.

And we were glad we did, because they do make some fine wine here, and it’s not that expensive. Each person gets to try four wines in either the dry or off-dry style; Jean and I split up the options so we could try everything. They have really good sparkling wines, made with Chardonnay or Pinot or both, and quite a few good whites, especially. As it wasn’t that busy, they also let us try a few more afterward, including their lemberger.

We bought four bottles here: a Chardonnay-based sparkling, a barrel fermented Chardonnay, a semi-dry Riesling, and a Gewurztraminer. 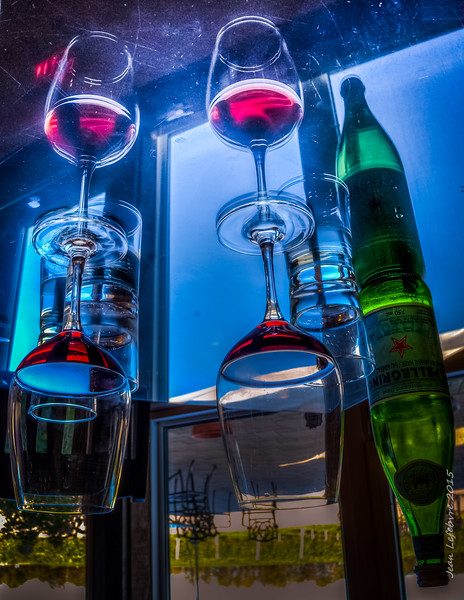 Had enough wine yet?

The other winery we made a point of returning to, a different day, was the one we’d regretted not buying from last time: Chateau Lafayette Reneau. We wondered if we’d like as much as the previous time—especially after Dr. Frank—but we did! Here you have to pay a bit for your tasting, but you can select any five you like from a list. They were pretty much all good, even the off-dry red made from concord grapes (the same ones you get in Welch’s grape juice).

But conscious of the import wine limits, we bought just three bottles here: A Pinot Noir rose, a Cabernet Franc, and a Cabernet Sauvignon. (These guys, as you see, were a little stronger on the red side.)

We had no trouble with the wine at the border stop on the way back into Canada, just as the Niagara wines were no issue on the way out. But it was nice, for this last part, to not have to even think about it anymore.

Though we didn’t take the pictures to prove it, we very much enjoyed our first dinner in these parts, at the Merrill Inn in Picton. It was a cozy, pretty room offering nice, quiet dining. I started with pickerel cakes and aioli that had this beautiful, light texture. They offered wine matching; that course came with a semi-dry Riesling. My main course was rabbit ragout with spatzle, that was very flavorful. Served with a Cab Franc. (Told you I tried that everywhere.)

Jean’s main course was a pretty spectacular gnocchi with mushrooms and truffles, served with Pinot noir. Sadly, we weren’t hungry enough for dessert.

Not from the Merrill Inn (could it be Peller?), though it could have been, theoretically…

Getting away from Wellington the next day was a bit challenging, as they were having a big pumpkin festival and parade! (Which explained the lady dressed as pumpkin in our cafe that morning. We’d thought it was a bit early for Halloween.) But once we did, we went over to Bloomfield to visit a shop that carried a whole lot of cheese from all parts of the world. Any of which you could try. We ended up with quite a stock.

Our final trip dinner was at East and Main, in Wellington (where we were staying). It’s fairly casual, crowded, and therefore somewhat loud. The food is quite good, though, with a focus on local ingredients.

Between the lack of border concerns and the area not offering as many alternatives, we visited more wineries here than in other parts.

Pretty Prince Edward County. Mainly, we were here for the wine. (With a side of cheese.)

Karlo Estates Winery was the first target, as we’d quite enjoyed a previous visit there. They did as good job this time out as well, offering bits of matching food with each wine we tasted. We were surprised to discover they grow a lot of their grapes in the Niagara region. We tried about seven wines here, and bought four of them–an unoaked Chardonnay, a Sangiovese, a petit verdot, a barolo, and a port style. They were quite delicious, though I would note they were also notably more expensive than ones we’d bought elsewhere.

We then asked for suggestions of which other places to visit, as the number of wineries here is pretty extensive. They suggested Traynor, just down the street. That was a nice stop. The winemaker was there, explaining his process. It’s a small operation with only a few wines. His Sauvignon Blanc was delicious, very much in the New Zealand style. We also picked up the Alta Red blend, with the idea of letting it sit for a bit, as it tastes a bit young now.

.He then suggested Stanners Vineyard for their Cabernet Franc, but they were sold out of that. We tried their oaked Chardonnay, but weren’t really into it. Their Pinot Noir was nice, though, so we bought a bottle of that.

Lunch options were a bit limited, so we headed to Norman Hardie for pizza. We weren’t the only ones with that idea; it was a zoo! But they had a nice, app-based system for notifying you when your table was ready, and we only had to wait about 15 minutes. The wild mushroom pizza was quite delicious, as was Jean’s glass of Pinot Noir. My Cab Franc was just so-so.

Not our photo, but Jean did mean to take one like this…

Our last wine-tasting stop was at Hinterland, where they make nothing but sparkling wine, using both the traditional and the charmat method. We came away from there with a Riesling-based sparkling, reminiscent of France’s Crémant.

So yeah. We won’t be needing to hit the LCBO for a while. Indeed, we have a bit of wine storage issue right now… Time for a party?