October 19 wasn’t only Election day, but was supposed to be the day I saw The Who in concert. Said concert had to be postponed until March due to Roger Daltrey coming down with a nasty case of viral meningitis. As it turns out, I was glad to be able to watch the election coverage instead.

But, we were planning to also take in the Mirvish play Kinky Boots when in Toronto for the concert, and [correction; It’s just been extended til March 6. But that wasn’t true until recently.] So when its tickets went on sale, we decided to do a weekend in Toronto built around just that play.

We often go to Toronto in February, so I kept getting thrown off by the unseasonably warm fall weather. I kept bundling up to go out then getting pleasantly surprised. It was quite the nice weekend.

October 31 also happened to be the day that a J.M.W. Turner exhibit was opening at the Art Gallery of Ontario. This is a painter Jean is interested in, so we went there on Saturday. We started with a slightly extravagant brunch at their restaurant, Frank. 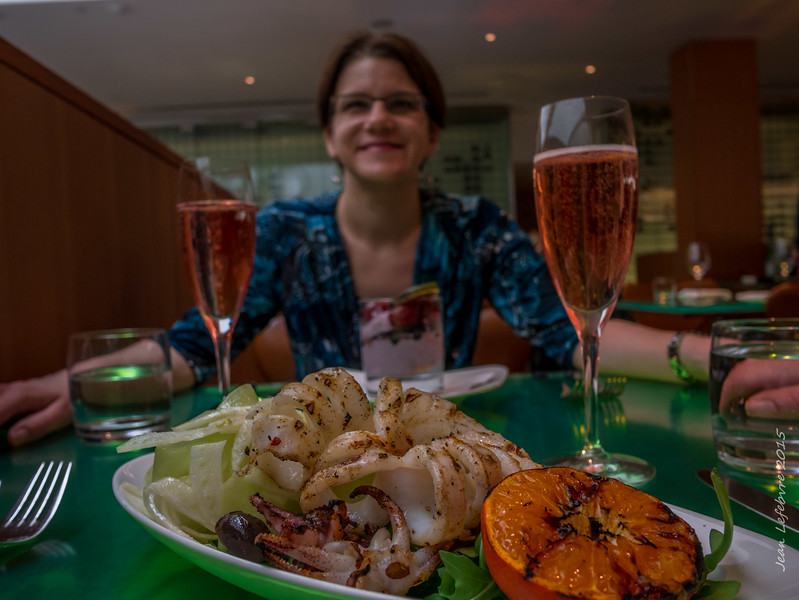 I had a hankering for sparkling wine, which inspired Jean to order the same (Henry of Pelham’s Cuvee Catherine)…

Then some friends joined us for the actual exhibit, which was handy, as their being members meant we got in free. It was an interesting collection of Turner work—watercolours with an “evocative use of light” that foreshadowed Impressionism,

Dinner was supposed to be at an Italian restaurant called Aria, but they called us Friday with the mysterious news that their building had to be evacuated by 8:00 that night, which might not give us enough time to finish dinner. Though offered reservations at their sister restaurant, it was quite the hike to get to, so we decided to book with Ki Restaurant instead.

We’ve been to Ki a number of times—It’s kind of our go-to before rock concerts at the Air Canada Centre, in fact. But this was our nicest dinner there ever. It was much quieter than usual (I think it’s just more popular during the week), and the waitress was very helpful at steering us toward the best dishes on the menu: Items like maple-tamari Binnaga with pine nuts and wasabi crème fraiche, roasted Cauliflower with sesame tare and shiso gremolata, and Tai with truffle oil and cranberry ponzu. Lovely balance of flavours. 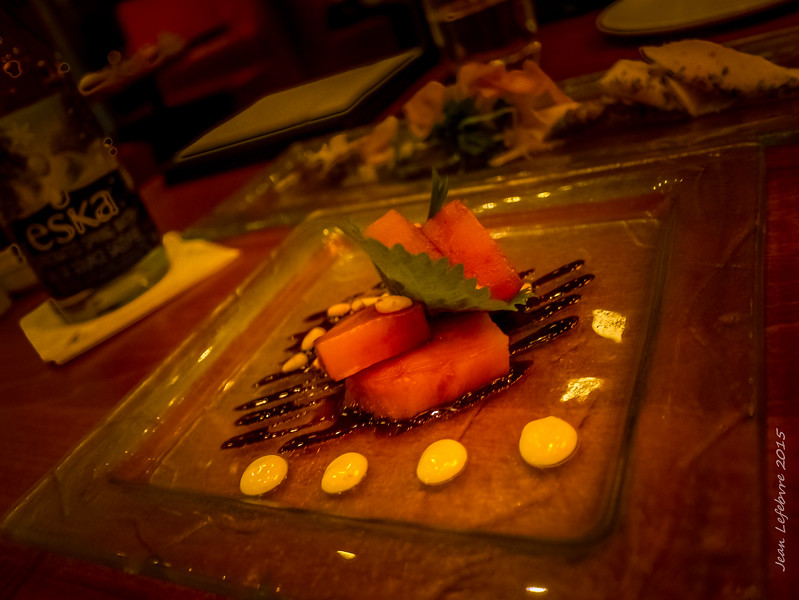 One of the amazing Ki dishes

It being a Halloween night of mild temperature, we decided to then go check out the Church Street Halloween party! We were not ourselves in costume, so were merely attending as gawkers. We weren’t entirely sure at which intersection it occurred, and it did turn out to be a substantial enough walk, but there were some pretty creative get-ups. And the crowd seemed to be in a very good mood.

A photo of the event by someone else…

We walked back to the hotel on Yonge Street. This featured more of the club-going Halloween crowd, who weren’t quite as cheery as they waited in line to get in.

Sunday, after an overpriced hotel breakfast, we had some delicious dim sum with my sister before our matinee performance of Kinky Boots. Which was a fun musical.

Though I have seen the movie, that was long enough ago that I can’t tell you what was different about the play—apart from the fact that the movie is not a musical. And that both are built around the story of a struggling shoe factory that finds new life in making, essentially, boots for men who like to dress as women. It’s a good cast, particularly the star, Alan Mingo Jr. as Lola, and KW’s own AJ Bridel as the luminous Lauren. It moves along well, driven by the songs written by none other than Cyndi Lauper.

Jean commented, and I agreed, that Charles’ second act outburst, that creates a rift between him and Lola, isn’t entirely believable. It goes a bit too far. Ultimately, though, that doesn’t spoil the enjoyment of the whole thing. Something has to set up the triumphant ending.

Finally, apropos of nothing, Jean did dress up for a Halloween party earlier in the week