Rainbow Rowell’s novel Carry On has an unusual genesis.

It originated in one of her previous novels, Fangirl, in which the main character, Cath, is obsessed with a Harry Potter-like series of books about a teenage magician named Simon Snow. So obsessed that Cath writes a lot of fan fiction about it. Cath’s big goal is to write her own version of the final Simon Snow book—in the form of a long story she calls Carry On—before the official book is released.

So Fangirl contains supposed “excerpts” of the “official” Simon Snow books, along with bits of Carry On along with other Simon fan fiction Cath has written over the years.

And Carry On is Rainbow’s Rowell own take on these characters; that is, she’s not attempting to write it in the voice of Cath.

As it was somewhat whimsically chosen as our book club selection, I had the rare opportunity of comparing my reaction to it with that of two people who, unlike me, had not read Fangirl.

Carry On is written with the assumption that you have read the previous six books (that don’t really exist). It doesn’t fully explain this world; it refers to previous battles and other characters without extensive elaboration.

This, I was somewhat expecting. My friends were not, and were initially somewhat mystified by it.

All of us, however, shared the “holy shades of Harry Potter” syndrome in that the beginning really seems like the start of any Harry Potter novel, with Harry—sorry, Simon—having a miserable, lonely summer among the “Normals”, then having some adversity in trying to get to his private school for magic people. There we find his smart friend Penelope, the great Mage who runs the school, the eccentric gardener Ebb, mortal enemy Baz, and so on. All so Harry Potter-ish, it’s quite distracting.

Fortunately, as the novel continues, it diverges enough and develops the characters sufficiently that you do stop mentally matching them up with JK Rowling equivalents and just enjoy the story on its own merits. We all found the plot engaging enough and quite appreciated the storyteller’s humour. For example, one of my favorite bits is that Penelope’s roommate is literally a pixie (named Trixie) who is indeed, quite manic!

The book’s use of spells was also very interesting (see A linguist live-tweets Rainbow Rowell’s Carry On). The idea is that spells are based on English idioms, sayings, poems. The spells can gain or lose potency over time as the phrase itself become more or less popular in the vernacular. So those good with words tend to be more powerful.

Song lyrics can be particularly magical, and of special delight was that this song played a key role in the plot:

Queen lyrics are totally magical what are you even talking about. pic.twitter.com/CDN2zISefp

(On an unrelated note, the Bohemian Rhapsody Reinterpreted video, featuring ballet dancers, a choir, and a string quartet accompanying Queen, is awesome:

Spoilers for those who haven’t read Fangirl:

I was aware that this book was going to somehow be a Baz / Simon love story. I was wondering how much that was telegraphed to those new to Rainbow Rowell. Answer: Not at all. It came as a complete surprise.

But, we all thought, it was a rather delightful plot twist that helped set the book apart from the many others in the genre. The premise here is that Baz is well aware he’s gay and in love with his roommate; Simon is oblivious to these feelings not only in Baz, but also in himself. Until one day…. 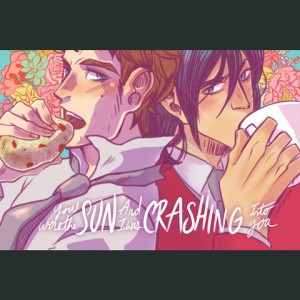 From the Simon and Baz postcard set available for sale