I vaguely wanted to do our New Year’s gourmet-ish, cooking together dinner again this year, but I was completely uninspired as to what to make.

But I had the week off before Christmas and New Year’s, and I had three-month trial subscription to Texture (formerly Next Issue) magazine app, with its multiple food magazines. So I decided to go through those virtual pages for ideas.

I hit pay dirt almost right away, in a Food and Wine magazine from December 2015. They had recipes for all these different theme parties. But instead of sticking with one theme, I picked and choosed among different ones. Preferred criteria were that they sound good, of course, but not require me to run all over town looking for obscure ingredients. And not having us slaving in the kitchen all day.

The one course not covered by this one Food and Wine issue was dessert. And I wasn’t finding much inspiration in other magazines, either. But that weekend’s Globe and Mail happened to feature a New Year’s Eve menu for two people—including a cake that made just two servings! We had a winner.

Theoretically first up (really, most everything was ready at the same time) were marinated olives with oranges, which, at Jean’s suggestion, were served with almonds and walnuts.

This involved frying up some garlic, orange zest, and hot pepper, to which olives were added. Then everything marinated in orange juice. So pretty simple.

I don’t how much that treatment enhanced the olives? But I was pleased to find that the Finger Lakes Cabernet Franc we’d selected went nicely with them.

The main course was a smoky mussel stew. For this one, potatoes and Brussels sprouts were roasted, while fresh mussels cooked in a mix of white wine, butter, shallots, and herbs. The mussels were then removed from the broth, and cream added. Everything then came together: potatoes, Brussels sprouts, mussels (shelled), with the addition of smoked mussels. 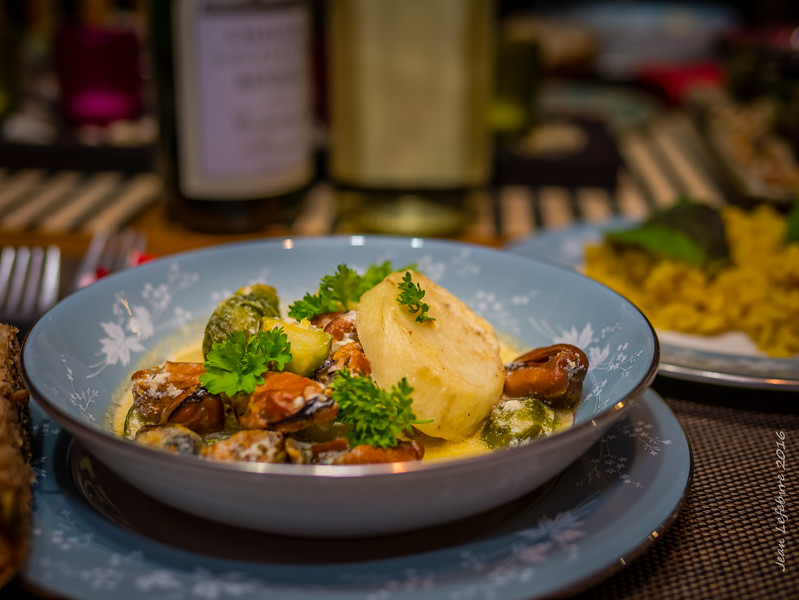 This isn’t the prettiest dish ever, but it was some good! The slight smoky with the creamy and the butter and the roast veg… Even the fact that we had to use frozen Brussels sprouts (fresh unavailable!) couldn’t wreck this. Yum.

The side dish was brown basmati rice with coconut and turmeric; basically, rice cooked in coconut mik with turmeric and salt. And served with mint on top. It was fine, but nothing outstanding. Rice does turns a nice yellow colour, though.

The wine we had with was an Ontario Gewurtz. Great wine; not sure if it was the best possible match, however.

The salad was spinach with orange and goat wine, with a red wine vinaigrette. I wasn’t able to find blood oranges, so Jean suggested adding cranberries to make the pictures prettier. 🙂 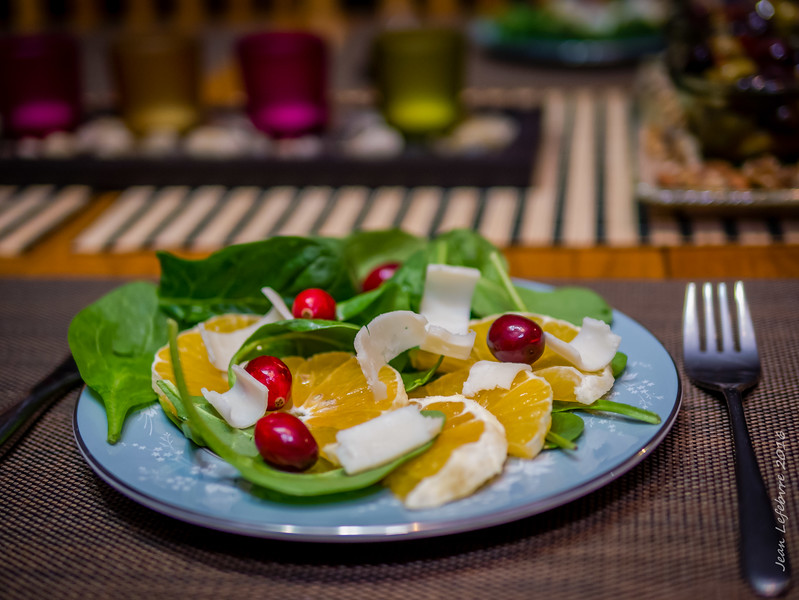 The dessert, finally, was a gâteau Basque. You make it a bit like a pie crust, mixing together flour, egg, sugar, and butter, then forming it into a disk and putting it in the fridge. When ready to bake later, you roll it out to cake pan size. 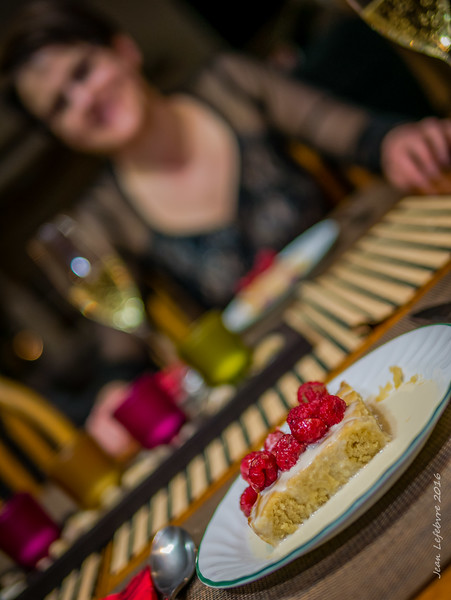 It was served with a simple cream sauce of whipping cream, sherry, and sugar, and topped with raspberries.

It was yummy, yummy this. As was the sparkling Moscato D’Asti we had with. Though supposedly only two servings, we had enough left to enjoy the next day, also.