No, not that Berlin. (Though stay tuned on that score.)

We didn’t have any New Year’s Eve plans until mere days before. Still kind of in mourning for Verses New Year’s, nothing else seemed to be working out. Langdon Hall sold out ages ago. Solé’s menu didn’t look that interesting. The meal at the club where our ballroom dance friends were going seemed even less enticing.

But a new restaurant named The Berlin, by a former Langdon Hall chef, opened on December 21. And on December 26, they tweeted that they would be doing a New Year’s Eve dinner. Though just announced, already the only times available were 5:00, 5:30… Then 9:00 or later.

Apparently, many people were just waiting for the right dinner to appear. (We went with 9:00.)

The Berlin has a nice room, but it was packed that evening, and just the proximity of so many neighbours did make it a bit loud. And, unsurprisingly for a restaurant so newly opened, there were a few glitches in the service.

But the food, though.

On offer was a four-course menu with four or five choices at each stop, for $75. Optional wine pairings were an additional $45.

Jean started with a poached egg item, while I was intrigued by smoked roasted beets with sour cream, bread crumbs, and herbs. I don’t know how you smoke beets, but oh my God, were they delicious (as long as you like beets, I guess). 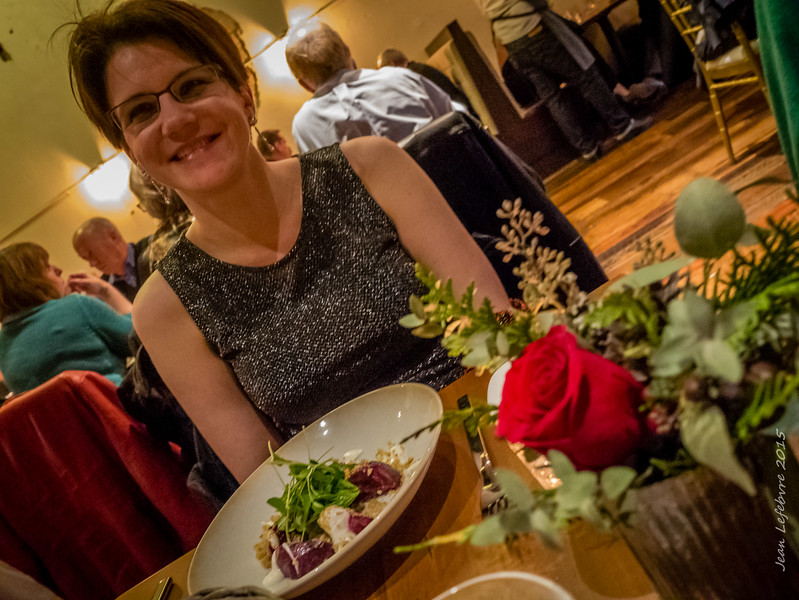 Suddenly, I don’t care so much about the noise

In one service glitch, the food arrived before our matching wines. But once notified, the Sommelier came over and apologized, and poured us each a sparkling wine: a fine champagne rosé for me and an even better brut reserva for Jean (which, by the bottle, was half the price of mine, by the way).

For the appetizer course, we did that rare thing of both ordering the same item: Potted duck leg with duck liver parfait, and apple chutney. Fortunately, it was divine. And served with a really intriguing, off-dry Niagara Chenin Blanc from Big Head winery. We did get that before the food, and had to resist drinking it all ahead of time. 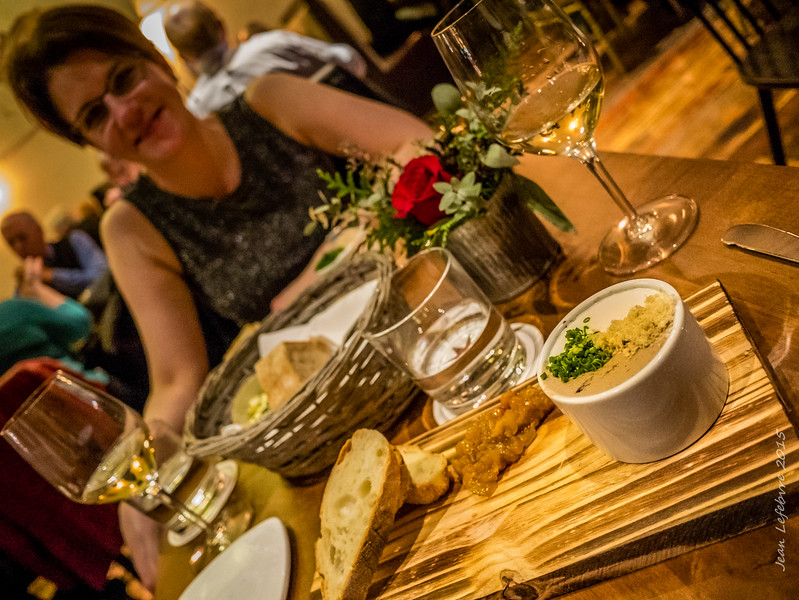 Onto the mains! (Although not before they tried to bring us some starters again, in another small glitch. But honestly, we didn’t mind a bit of wait at this point.) Jean went with the pork belly served with chick peas and cabbage stew. I had trout with wild mushroom and leek. Both were excellently prepared and flavorful. 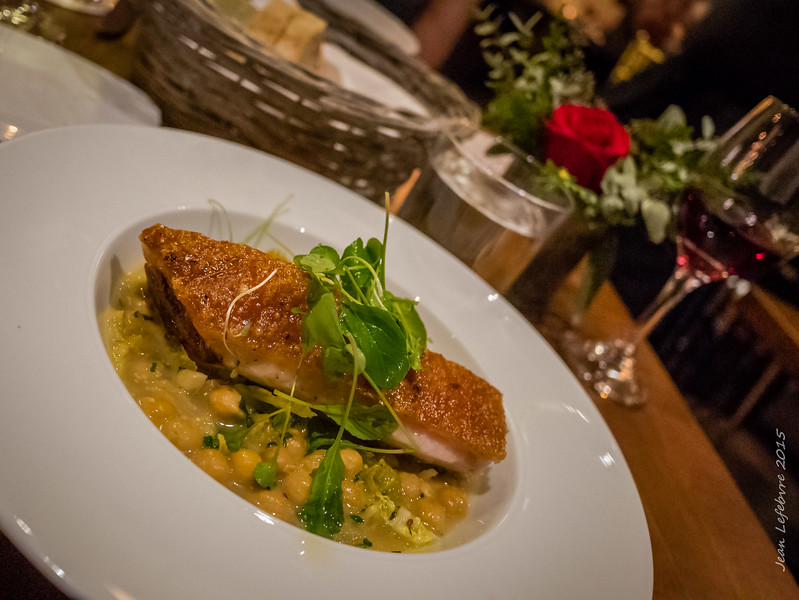 Jean got a really interesting red Italian wine with this, called Etna Terre Nerre Rosso. I had a nice Riesling.

This was a good amount of food, but it’s true there’s always room for dessert. Mine was an amazing dark chocolate terrine with lavendar ice cream. It was served, believe it or not, with this spicy dark beer! Which totally complemented the chocolate! 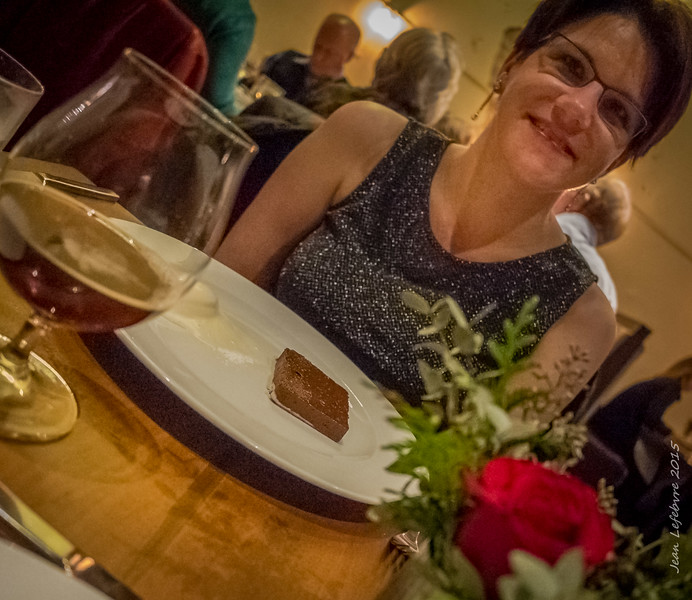 Jean’s cheese dessert was frankly richer and creamier than the chocolate, and served with this freakin’ amazing truffle honey. The earthy truffle, plus the sweetness… Whoah. He got an off-dry wine from Spain with this. 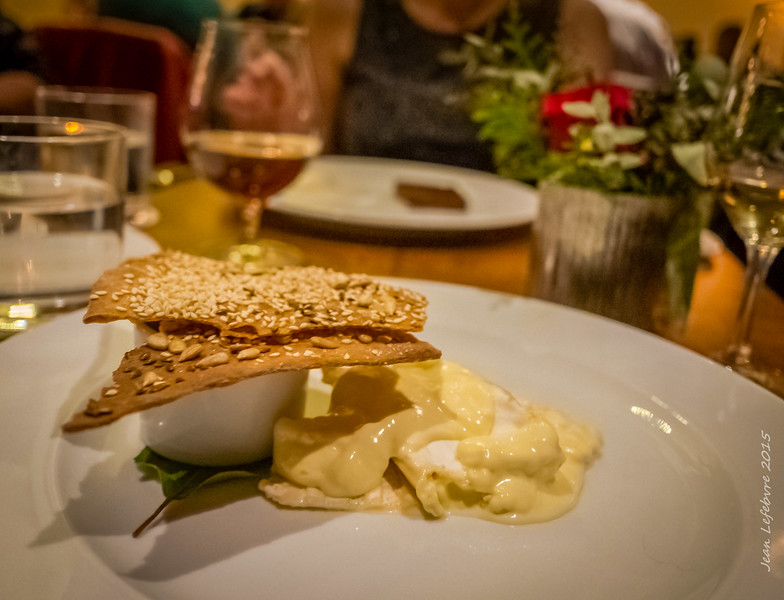 We were done around 11:15 or so, so we made it home to ring in the New Year there. Cheers, everyone!