I can’t stop writing about Berlin! But this time I mean the restaurant in Kitchener, Ontario, and not the city in Germany. They are now holding the following events:

The Berlin is excited to announce our new dining series “Upstairs at The Berlin” in our second floor gallery. Each dinner we will focus on the unique aspects of wine/beer and food culture to celebrate and be led by the community of chefs, farmers, foragers/producers, wine and beer makers/ambassadors/sommeliers, writers and epicureans who contribute to our ever growing culinary scene here in Kitchener-Waterloo/Ontario/Canada.

Arrival Reception/Meet and Greet to begin at 6:00 p.m, with our casual, fun and interactive dinner to start at 7:00 p.m, where guests will be seated at communal tables for maximum mingling.
Beer Dinners – $85 – 4 courses, 4 Beers
Wine Dinners – $105 – 4 courses, 4 Wines

We signed up for one featuring wines from France’s Louis Jadot winery.

On entry to the upstairs, we were greeted and offered a glass of either the 2014 Chardonnay from Macon Village or the 2014 Gamay / Pinot Noir blend. We split the difference and got to try both—very pleasant wines.

There was also a welcome spread of amazing Raspberry point oysters, goat cheese, and a cut of meat slow-braised to pâté-like consistency. Everyone was just milling about, and we got into a nice conversation with someone I worked with a couple companies and quite few years ago—good memory for faces (on his part, not mine)!

(And we had been hoping that the upstairs would be a little quieter than downstairs, but it wasn’t, so much. So everyone had to speak up.)

We then selected spots at two long communal tables. We hadn’t previously met any of the people we ended up sitting with, but some had interesting ties to the food and wine being served (farmers or fathers of wine reps), others had visited the region of France being featured (which we haven’t), and everyone was quite interesting.

The first pour was a Pouilly-Fussé, which I don’t think of as my favourite wine, but this was a very nice, fresh example. We heard briefly from The Berlin’s sommelier, than the representative from Louis Jadot explained the region, the history of the company, and the particularities of this wine. (Including that it’s actually a Chardonnay. Did you know that? I hadn’t known that.) This particular one is not branded as Louis Jadot, because while they bought this small winery, they decided to leave the original branding and management in place. It traditionally and still has a woman who does the wine-making,

The first course served with it were bay scallops seasoned with dried apricot, cucumber, mustard seed, and hazelnut yogourt. Chef Jonathan Gushu came out to explain that he used the smaller bay scallops instead of the usual showy sea scallops, because they had a more true seafood flavor this time of year. And that was correct. Lovely dish with sharp flavors. 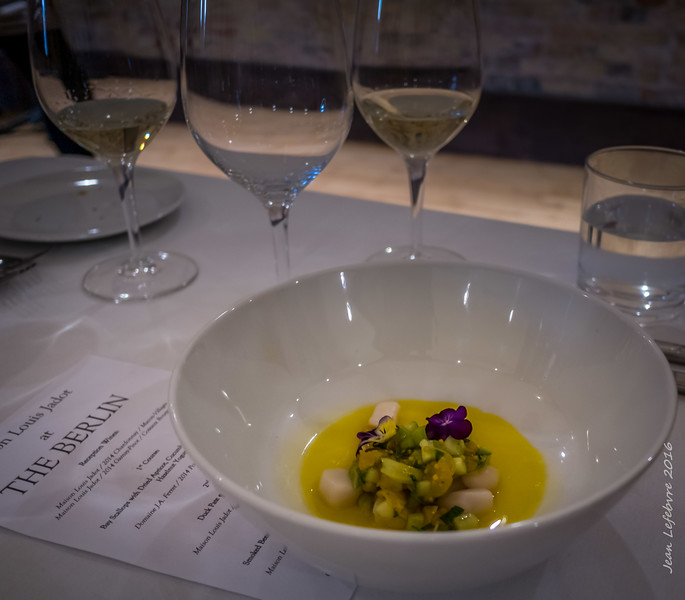 At this point I should mention that Jean and I chose to take the iXpress bus to the restaurant and a taxi back. So that while it would have been possible to stick with the modest initial pourings of each wine, taste everything, and still be fine to drive home, we were glad that our not driving meant could enjoy the wine top-ups generously provided.

Speaking of which, next on offer was the 2013 Marsannay Clos Du Roy, which is a Pinot Noir, and of the lighter, dry style that is common with this grape. This one also had nice complexity, and I could see it suiting a wide variety of food.

What we got was a classic Pinor Noir  pairing of duck—specifically, duck pâté en croute with shallot jam. Jean declared it the best dish of its type ever, and I also can’t recall a better one. 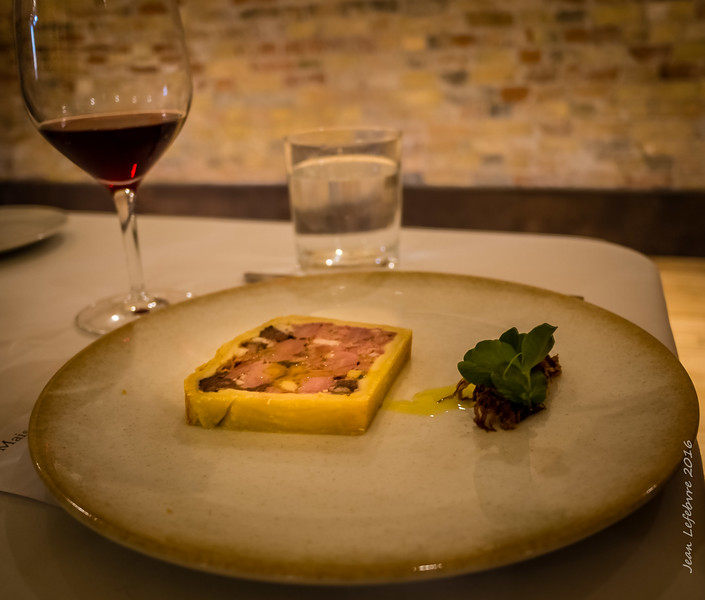 The next wine was the same grape from the same house—except that it could have been from another planet, it was that different from the previous wine. The wine rep explained that, yes, this was what so typical and mystifying about this wine region: That mere kilometres apart, wines could be so very different. And also that some of the plots (like the Beaune ones) are tiny and specialize in the one thing they do best. This was our special wine of the evening, the 2007 (great year in France) Beaune Close Des Ursules Pinot Noir. Rich, delicious, stunning… And yes, we got refills. (It’s not available at LCBO, of course, but the Beaune wines they do have start at $90. I think the $105 for this dinner was a pretty good deal.) 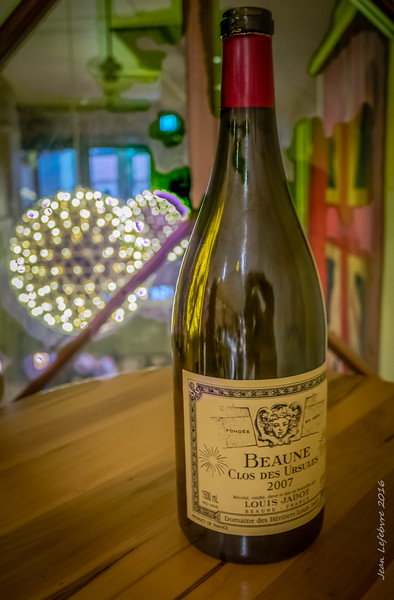 No leftovers of this one

We also got food with this. 🙂 That would be the smoked beef strip loin, courtesy of the farmers opposite us, who raise in them in the best possible conditions, all grass fed and whatnot. Served with leek and shallot puree. And while beef will never be my favourite item, the smoking made it more interesting, and it was nice cut of meat. 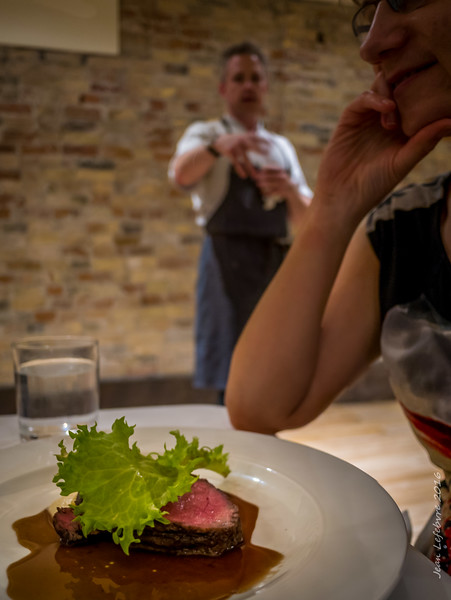 Chef Jonathan Gushu behind me. His cooking philosophy is to work wih the best ingredients and allow their own character through.

For dessert we got to stretch, as they laid out a buffet of various cheeses along with sweets such as creme brulée, macaroons, strawberries, and caramel popcorn. Both the savoury fan (Jean) and the sweet fan (me of course; for who is sweeter than I? 🙂 were pleased with our options. The creme caramel was, in Gushu style, just perfect texture cream, sugar, and eggs, with no exotic flavors to mess with that basis. And the macaroons and popcorn… I had to go back for more of both. 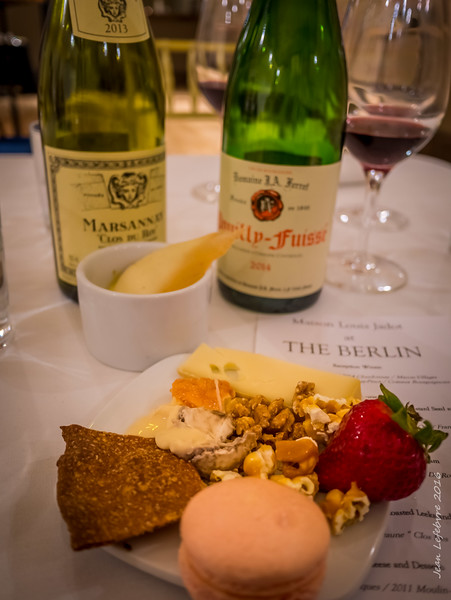 We loaded up but still needed refills

Our wine with that was the Chateau des Jacques 2011 Moulin a Vent, which is a Gamay, and is available from LCBO (for about $34).

All in all a lovely evening. I hope this series continues.