It’s Canada Day. And right now the world is giving me many reminders of how lucky I am to live here.

1. That Quebec’s referendum on separation was defeated.

I wasn’t paying much attention to Brexit until a couple weeks before it happened, and even then I was thinking that surely they wouldn’t vote Leave? Watching the results come in reminded me so much of the horrible Quebec separation referendum of 1995. A full night of tension (following weeks of worry on a vote I, an Ontarian, couldn’t even participate in) watching the movement of a Yes (separate) / No (stay) line on television.

But then, while the Yes started out strong, it gradually swung toward the No, who ended up taking it with a 0.6% margin. Whereas Great Britain’s vote was the opposite: A strong initial showing for Stay giving way to Leave, who took it with 2% margin. (No matter how many times I refreshed my browser.)

What would have happened to Canada had it gone the other way? Great Britain’s experience is giving us an idea:

For Canada, it would have been all that, only worse. (For an idea just how ill-prepared the country was for the possibility of a Yes vote in the Quebec Referendum, read Chantal Hébert’s The Morning After: The 1995 Quebec Referendum and the Day That Almost Was.)

And just for the record, Leave voters in Great Britain: What you did was crazy. Your country had a great deal in the EU: you were allowed to retain your own currency and greater control over your own borders than other countries, while still enjoying full trading access and movement of workers. And you gave that up for what?

2. That recent attempts to win Canadians’ votes through xenophobic appeals have failed.

While a number of factors inspired Leave voters, the wish to reduce immigration—particular a certain kind of immigrant—was among them, as evidenced by the unfortunate increase in hate crime and racist abuse since the vote (as though racists now feel “allowed” to air their views). Meanwhile, the presumptive Republican nominee for US President wants to ban all Muslims from entering the country (“til we figure out what’s going on”) and build a wall to keep out Mexicans. And France has their National Front party. And so on…

But similar appeals haven’t met with success in Canada. In Quebec’s (them again) 2014 election, the Parti Québecois ran, in part, on a “Charter of Values” that would have banned public sector employees from wearing “conspicuous” religious symbols: 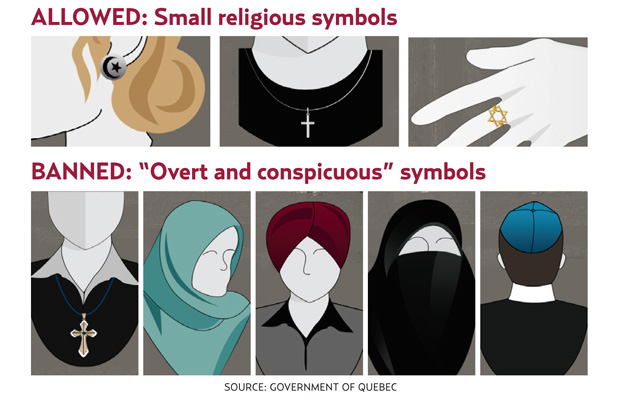 This bill was so popular in polls, the PQ used it try to turn their minority government into a majority. It didn’t work. After a fairly disastrous campaign by the PQ, it was the Liberals, who opposed the Charter, who were elected with a majority of the seats. With the added bonus that the spectre of another Quebec referendum on separation retreated further.

Then in the 2015 election, the ruling Conservatives appeared to gain ground in polls after they pledged to ban the wearing of niqabs at Canadian citizenship ceremonies, and to set up a barbaric practices tip line. [This is when I had to check out of Canadian election coverage for a while, as I was so distraught.] But the end result was, again, a coalescing around the Liberal party, who were foursquare against both proposals (and, it must be said, who generally ran a brilliant election campaign).

A plurality of Canadians chose hope over fear

Upon election, Liberals walked the talk, dropping the court case on the niqab ban, and most notably, welcoming 25,000 (and counting) Syrian refugees, moves that have only made them more popular since the election. Americans look on it in wonder, from The Daily Show to the New York Times:

Canada has an unusual problem with Syrian refugees: Too many people want to help https://t.co/s809ulu9tW pic.twitter.com/9yFfPPcchs

Why? Well, Vox Magazine says it’s the outcome of decades of Canadian government fostering tolerance and acceptance as core national values. As a result, most Canadians see immigration as an opportunity, not a problem; as something that improves rather than threatens the nation. Apparently, Canada is the least xenophobic country in the Western world.

3. That our current government is (mostly) pro-trade

One of the most confusing results of the Brexit vote, to me, was the cavalcade of federal Conservatives MPs who tweeted their approval—the only Canadian I’m aware of who did so. But isn’t Conservatives supposed be all pro-trade, because it’s good for business, while it’s the lefties who are opposed, fearing it’s bad for labour?

And yet there’s Trump, spitting about pulling out NAFTA. What? When did this turn around? (Harper’s government, it must be said, was most definitely pro-trade, making the MPs comments all the more confusing.)

So it was another interesting bit of timing that this week was the NAFTA summit between the current US President, Canadian Prime Minister, and Mexican President.

Too bad they’re all men (but this US will be changing that soon, right? right?), but a fine-looking trio they are

Their big message: Trade is good. Countries are stronger when they work together. Globalism brings prosperity. And it was all capped off by one amazing speech President Obama gave in the House of Commons:

And what makes our relationship so unique is not just proximity. It’s our enduring commitment to a set of values, a spirit alluded to by Justin that says no matter who we are, where we come from, what our last names are, what faith we practice, here, we can make of our lives what we will.

Watch or read the rest here.

It was heart-warming, and for a while, one might forget that it remains so much easier to cross borders in Europe than it is to move between the US and Canada, that we have to pay duties on even tiny online purchases from the US, and absolute absurdities such as Canadian inter-provincial (!) trade barriers that cost our economy billions.

So there’s a lot of work to do on this one. But at least it seems the intent it to make things better, not worse, on this front.

Cause that’s the Canadian way.

3 thoughts on “A bewildered Canadian on a world gone mad”