Rocky Horror Picture Show and I go way back.

I read about the movie years before I actually saw it. In my small, Northern Ontario town back in the day, there were no late-night (or any time) showings, but I read about them in the rock magazines. I recall being quite taken by the photos of Tim Curry in his fishnets. (I later learned that many women found themselves surprised by how much they were taken by Tim Curry in his fishnets.)

Attending the film itself had to wait until I went to university in Montreal.  The McGill Film Society showed it and my friends and I were there, armed with newspapers and rice, but not in costume. The audience was a mix of newbies and, fortunately, some veterans who knew what you were supposed to shout at the screen when. I wasn’t entirely sure if the movie was good (so campy!), but I found the whole experience fun. 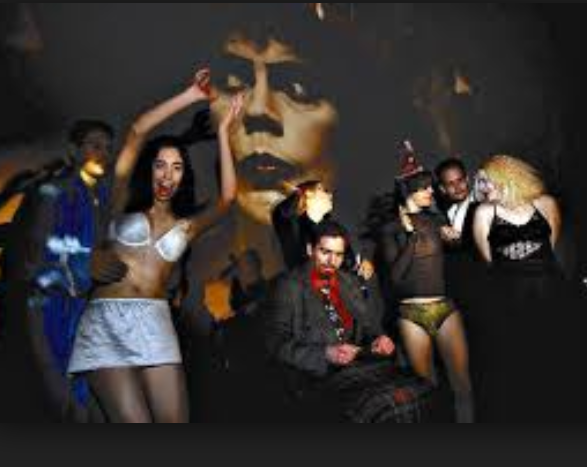 I never did become a regular screening attendee, but I’ve certainly seen the movie a number of times since then. Our local repertory cinema still plays it every year at Halloween. Jean and I attended with friends at least once. We hadn’t planned for enough ahead to get fully costumed as any character, but I did aim for a sort of Goth look. (And I believe that Jean eccentrically went as a clown.)

Since then, I’ve seen Rocky Horror on network TV, purchased and devoured the DVD–including all extras–saw a very fun live performance of it courtesy of the University of Waterloo drama department (being a performance for alumni and faculty, that was a different audience than previous), and even checked out the TMN parody (more nudity, but much less gay).

So when I read that JM Drama Productions had another local version on this past weekend, it was an easy to decision to go.

Most appropriately, we had to run through heavy rain to get to the theatre, where we were confronted by a number of scantily clad Goth types. Rocky Horror is always a sexy beast, but this production really laid that on thick, aided by the many very attractive young actors cast. For instance, Janet starting panting the minute she saw Dr. Frank (and who can blame her), and the choreography ensured that you didn’t miss any of the double entendres in the lyrics.

The JM Drama cast; picture from The Waterloo Region Record

JM Drama is community theatre, so their budgets were small. But their costumes and makeup were top-notch, and they were very creative about the props and sets. The vocals weren’t always great; but then, that’s not as important for this particular musical. (It’s hardly Les Miz.) Fortunately, some of the best singing was done by lead Dr. Frank, who gave an excellent, charismatic performance.

Appropriately, there was some gender-bending within the casting. Both the narrator and Dr. Scott were played by women, and why not? It even allowed for some fun Frank / Dr. Scott flirtation. And Magenta was played by the absolutely fabulous David Cho.

Overall, the whole thing was a hoot (to quote Jean’s post-show assessment). Of course, with a live production, the audience couildn’t (and didn’t) yell back or throw any projectiles. But, they did invite everyone on stage at the end for a reprise of “The Time Warp.” Jean promptly sat back in his chair, but I went for it! And yay me, as I got to dance near the two hunkiest members of the cast, Rocky immediately to my right and Frank directly in front. (Which is why Jean didn’t manage to get a picture; the actor playing Frank was very tall.)

This isn’t the kind of play that’s meant to be contemplated on too deeply, but this production gave rise to some thoughts:

Eh. Too serious. It’s just a jump to the left. And a step to the right.

See you back here after I watch Fox’s Rocky Horror reboot on TV, coming up in October.

Trailer for the new Rocky Horror Picture Show on Fox