New York is one of the world’s great cities. Montreal is often considered Canada’s best. On our recent trip, we visited both. This was our itinerary: 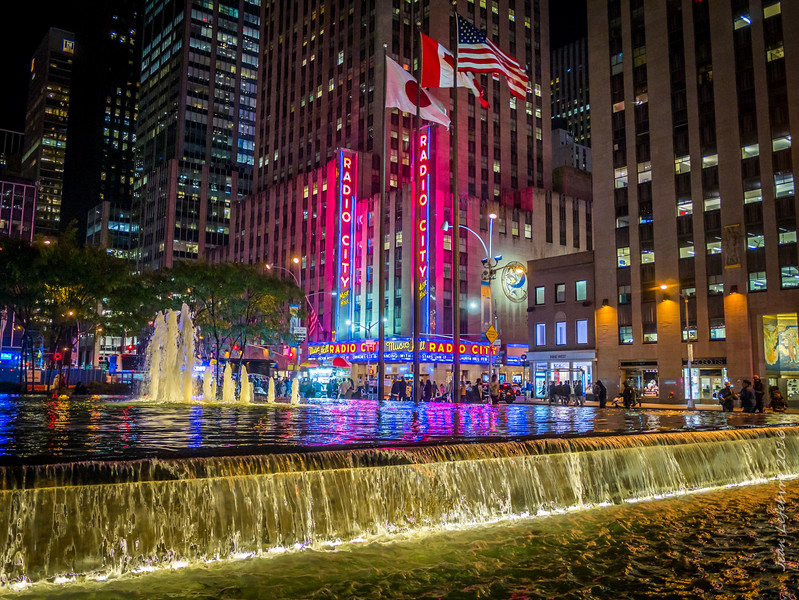 Just now noticing the Canadian flag flying between the Japanese and US ones in uptown New York. No idea why. 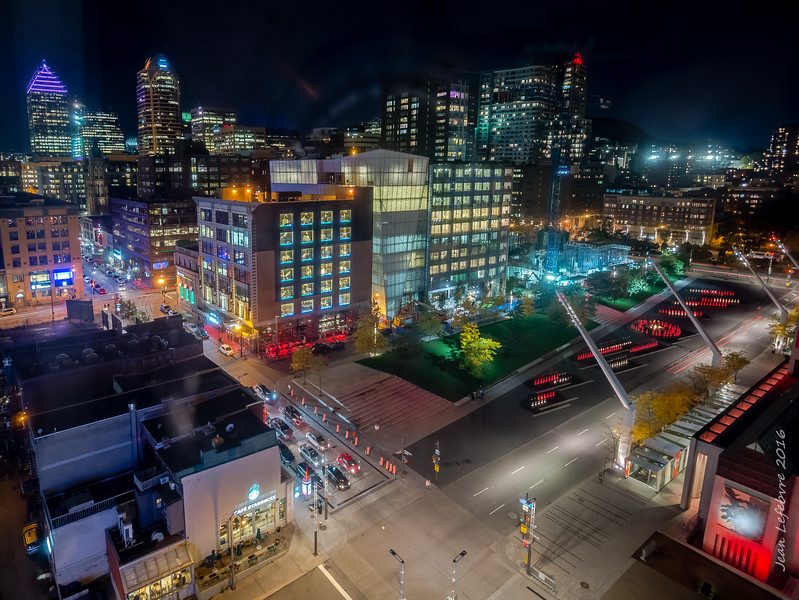 The view from our Montreal hotel (not the airport one)

Our last trip to New York was in 2008, and we’d bypassed a lot of the major museums to avoid lineups, then ended up regretting that. So this time we plunged in. Lord, New York has amazing museums.

MOMA (Museum of Modern Art) was up first, where we followed the good advice to start on the fifth floor, where all the major works are—famous Picasso’s, Van Gogh’s, Dali’s, Goya, Chagall, Monet. They had an online app to use as an audio-guide. The other floors couldn’t measure up, but I did enjoy the pop art section.

The Ellis Island Museum had an interesting focus on the US immigrant experience, as it is housed in the building where they were processed back in the day, when immigration rates were staggering.

A statue of Annie Moore, the first immigrant processed at Ellis Island

We had pre-bought timed tickets to the very popular 9/11 Memorial Museum, but still faced a significant lineup to get in. It’s located where one of the World Trade Center buildings once stood. And the layout, all below ground, is somewhat confusing—still not sure if we saw everything.

It’s definitely an emotional experience, visiting there, being vividly reminded of a “historical” event that I remember so well.

What remains of the World Trade Center

The Metropolitan Museum of Art is huge and just fabulous. Of course, we didn’t try to see it all. We did take a Highlights Tour to get some sense of the Egyptian, European, American collections, with a close focus on some superb works in each. We went back to visit the American collection and the sculpture garden in more depth. 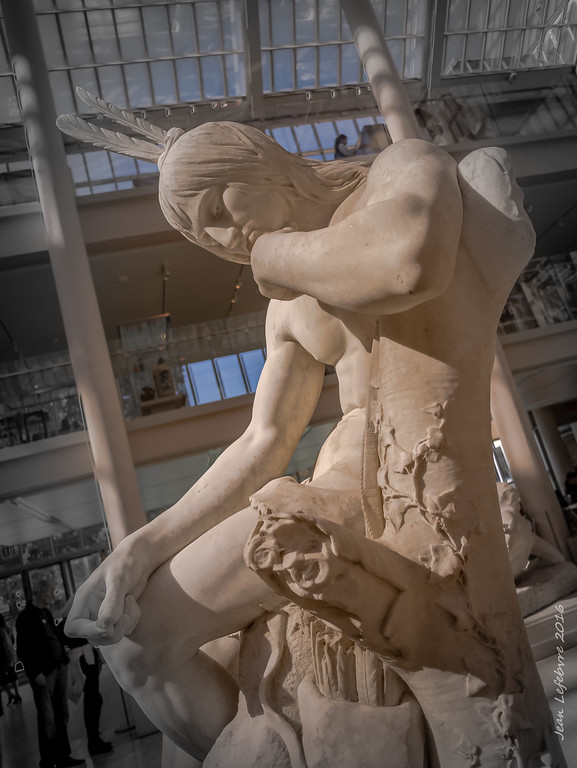 We both happen to be reading An Inconvenient Indian, which discusses art depicting Natives, such as this

The Intrepid Sea, Air, and Space Museum is a maritime and military history museum. There we got to tour a nuclear submarine; get onboard a large military ship (the Intrepid) and see many warplanes; and have a look at the Space Shuttle Enterprise—bigger than we expected! You do get a lot of US military history and a sense of what it would be like to work on these various vessels. Very interesting. 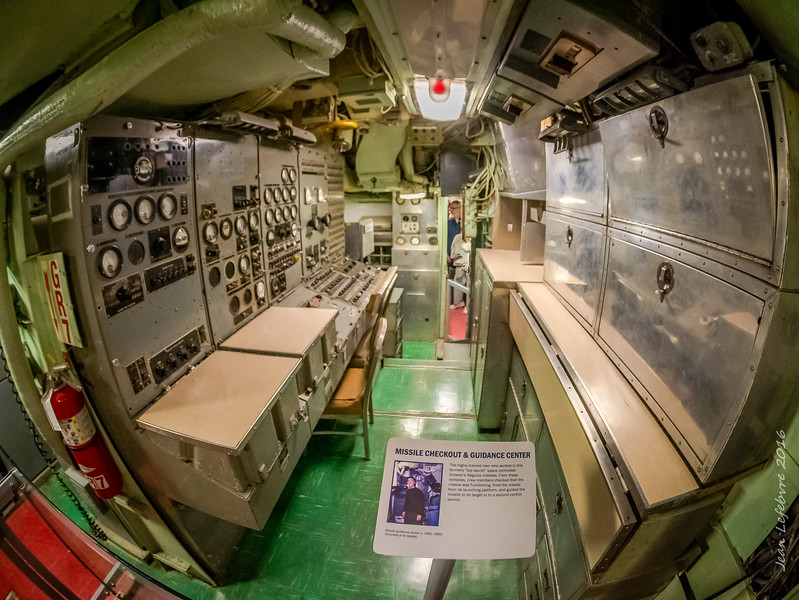 Inside the USS Growler nuclear submarine

Yes, it’s a war plane, but this is an admittedly gorgeous design

New York has some of the great museums of the world. Whereas Montreal can’t even boast the best in Canada. But, the Musée des beaux arts (Museum of Fine Arts) was featuring an exhibit about New York artist Robert Mapplethorpe, and that was well worth seeing. They had an extensive collection on display, and if you didn’t know at the start, you’d realize by the end what an amazing photographer he was.

The McCord Museum attracted me for its exhibit of Montreal rock photography, but it was really small. The best part was their permanent collection on the history of Montreal, told by street and neighbourhood.

Jean told me I had to see the New York City Library this time, and he’s right; it’s pretty stunning. (And free to tour.)

Be quiet and admire the art

He wasn’t so sure about my idea of touring Radio City Music Hall, but that was great also—and not only because we lucked into free tickets from two ladies who’d decided they just didn’t have time to take the tour they’d already paid for. But it’s gorgeous in there, and amazing to think it was originally built as a movie theatre. Now, of course, it’s used for shows, most famously those featuring the Rockettes. The tour takes you backstage, below stage, and to special guest rooms. You also get a meet a Rockette.

Our Montreal food tour also happened to include a stop at a former movie theatre that is now being used for shows. This one, the Rialto Theatre, has had a much rougher ride than Radio City Music Hall. It has suffered some unfortunate architectural and design changes, and actually lay vacant for a number of year after being declared a heritage site. But the new owner is determined to restore it to its former glory. 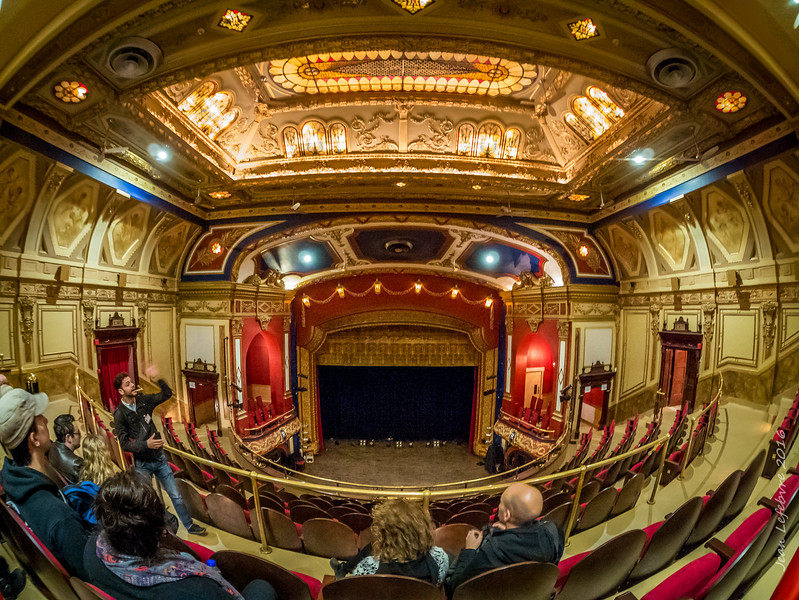 Nature in the city

Part of what makes both New York and Montreal great are the vast parklands available right in the core. After being art-exhausted by The Met, it was great to amble back to our hotel through Central Park on a lovely sunny day. (We were lucky weather-wise this trip; mostly all lovely sunny days.)

In Montreal, when we had some time to kill between walking tour and dinner reservation, we took to walking to, up, around, and down Mount Royal. (That was a high calorie burn day, I think.)

See what I mean about the sunny days?

Both, of course, are also islands, and we enjoyed walking the Vieux Port in Montreal also—an area we haven’t visited as often. New York’s harbour offers some special views.

We unsurprisingly failed to win tickets in the Hamilton lottery. Instead, we went to see runner-up for best musical, School of Rock. I chose that over The Color Purple for the fun, which it certainly had in abundance. But I did find a few moments surprisingly touching, particularly the “If Only You Would Listen” song by the kids.

And man, were those kids amazing musicians!

We did wish we had tried for Daily Show tickets—didn’t think of it in time. We did end up walking past their studio, though, on the way to the Intrepid.

We did not do much shopping, but Jean was determined to get to B&H store, which has a lot of photography items along with some tech stuff. The challenge was that they were closed for several days for Jewish holidays that week. But we fit it in a visit (barely) between our 9/11 visit and a downtown dinner reservation.

And you know who’s the only one who bought anything at Jean’s mecca? Me. The Huawei phone I’d been eyeing looked lovely in person, and was discounted by $50 US. Combined with my Nexus 4 showing signs of age (irritating on this trip, as we were somewhat Google-reliant), I went for it. Then found out it came with not only a case and SD card, but premium ($80 US) earphones and case, and various photography attachments.

But tip: Don’t try setting up your new phone on hotel wifi. Recipe for frustration.

In Montreal, I got my hands on case for my new eReader, and also bought a tiny wallet to go with the tiny purse I’d purchased for the trip.

Both cities are great foodie destinations, but we didn’t book at any of the very top restaurants: no Toqué, no Per Se. And where we used the Michelin Guide on our last trip to New York, this time we relied on a mix of Frommer’s, Trip Advisor, and Google to find places to eat. Some highlights: 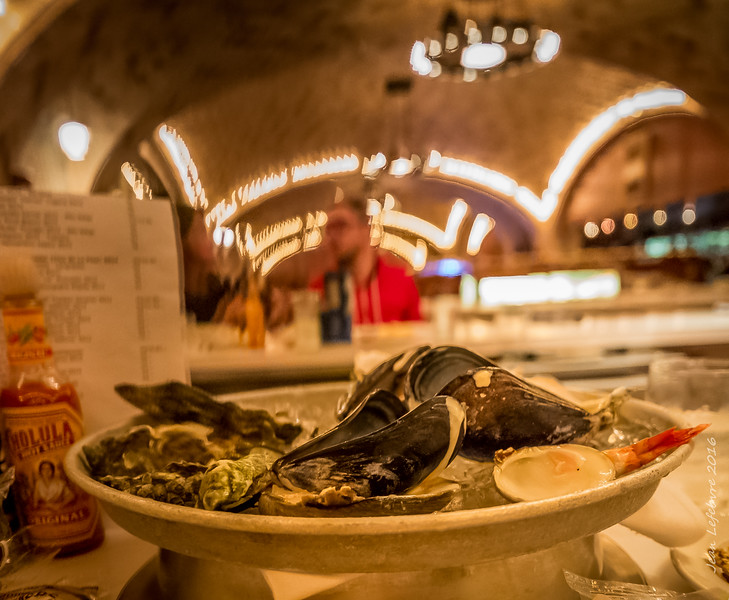 New York has some very fresh seafood on offer

In Montreal, we were guided more by Where to Eat in Canada. We went to a quite good Indian restaurant in Old Montreal called Mirchi on our first night. The table d’hôte was a good deal there.

Liked that the mains were as creative as the appetizers: Scallops with buttery cauliflower; guinea fowl in foie gras jus with figs, bacon, and shitake

Ricotta meringue in the forefront; chocolate mousse and cake with fig in the back

Our food tour of the Mile End neighbourhood in the Plateau area was very good, giving history of the place and its inhabitants along with the food samples. The group participating was a good mix of Canadians and Americans (including another couple from Kitchener). Over three hours, we got:

So you see why we walked up Mount Royal after.

Unlike hot dogs, it’s just fine seeing how bagels are made

And we still went out for dinner in that neighbourhood late, at Le Comptoir, which features small plates. All very good! We had a charcuterie plate, beet salad, smoked salmon with aioli, and agnoletti with cured beef and tomato.

Well, our flights (all on Air Canada) were short: Takeoff, get your drink and pretzels, then get ready to land. Flying out of Hamilton made for an easier drive, parking, and checkin than Pearson would have—worth the flaky wifi and limited restaurant options. But really, things were fine at Trudeau and LaGuardia airports as well. We were amazed how quickly we got through security, customs, and baggage pickup.

Neither city has particular good non-taxi airport transportation, though. We tried taking the Montreal airport bus back, but they wouldn’t accept a $20 bill—we would have had to come up with $20 in change. Really? So back to taxi we went. And the initial New York taxi ride was complicated by roads being blocked for a Columbus Day parade.

Once in either city, though, we were well-served by public transit. New York’s was definitely confusing—despite Google help, it took a while to realize that more than one line could use the same track, such that getting on the first train that pulled up wasn’t always the best bet. But we got better at it. Both cities give you cards with fare loaded, that you then tap (Montreal) or slide (New York); weird that Toronto doesn’t have that yet.

We were happy with our centrally located hotels in both cities—and frankly surprised how large the New York one was. The only problem at Park Central were the elevators, which simply weren’t sufficient in number, so more than often than not incredibly crowded and slow (stopping on every floor for people who had no room to get on).

If I had to sum up New York, I think it would be “efficient”. Yes, the lineups were long, but man, they were processed fast. Even with all the extra security checks. No time for niceties; just get everyone through.

At restaurants, there’s no (or very little) wondering what the delay is, but also not much lingering over your meal. Get them in, get them out.

The streets are crowded. You have to keep moving. One night in Times Square, always the busiest part of town anyway, part of the street was blocked off for an Alicia Keyes concert. We were simply caught up in a crush of people trying to get by that part of the street. We all had to walk at the same pace. When another group filed past us in the opposite direction, Jean and I were separated and I moved ahead faster—til I finally found a small open area where I could wait for him to catch up. 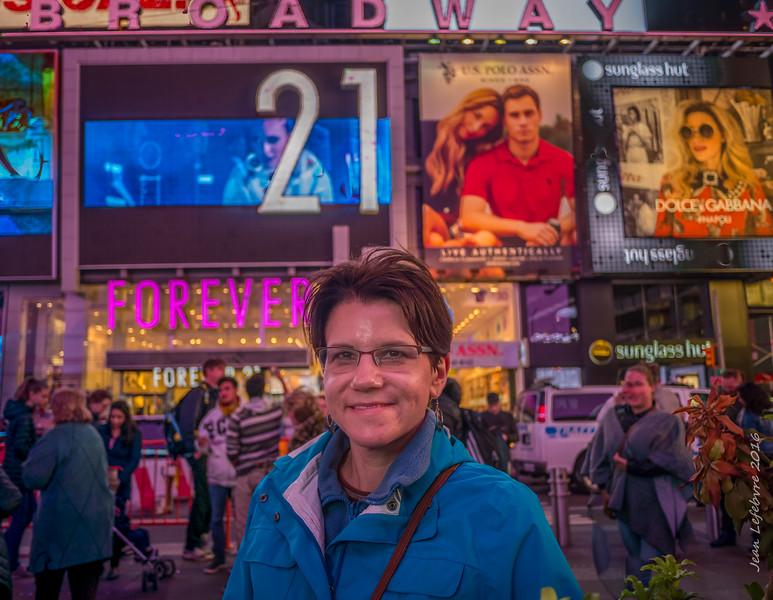 Montreal seemed super-mellow by comparison. Spacious. Lower buildings (law that none can be taller than Mount Royal). Linger over your meal if you’d like.

And it’s good they weren’t hell-bent on efficiency, because there was construction everywhere! Main streets, middle of all Old Montreal, all over. (In preparation for a big city anniversary next year, apparently.)

And, Montreal is famously bilingual. Everyone must greet you in French by law, so we’d respond in kind, but then they might switch to English after overhearing our English conversation, but then back if we’re using a French menu…

Though it must be said we heard a lot of French in New York as well. And that Met tour we did? Tout en français, as we didn’t want to wait an extra 45 minutes for the English one.