My opinion of this year’s top music? That I probably didn’t hear most of it. Last year, under Adam Lambert’s Spotify / Twitter guidance, I actually heard a fair amount of the top 40. This year Adam had other priorities (tours, movies, TV shows), so I reverted to more typical behaviour for someone my age, and listened more to older stuff.

Still, some audio releases of 2016 managed to grab my attention.

We went to New York this year, but did not see Hamilton, the Broadway musical. I tried for tickets, but without really knowing much about the play, other than that it was super-p0pular. We did see the New York Library exhibit about Alexander Hamilton’s life, however, and it certainly was a colourful. So on my return, I finally listened the musical soundtrack, and really liked it. I definitely got into the story line, and a lot of the songs are just catchy. They’re not all hip-hop, but I liked those ones, too, generally.

So The Hamilton Mixtape, a collection of covers, re-imaginings, and out-takes from the musical, was the only album I got my hands on the day it came out. It did not disappoint. It just highlights why this story of someone from so long ago resonates today.

Carly Rae Jepsen: E*MO*TION Side B

It actually took me a few listens to really get into the original E*MO*TION album, but I had no such trouble with Side B. Why these particular tracks didn’t make the original cut is a mystery, as they seem as strong as those.

Favourite track: “The One”

The Queen Extravaganza: A Night at the Apollo Hammersmith Live

The Queen Extravaganza are the officially sanctioned Queen tribute band, and on this outing they tackle the entirety of A Night at the Opera—something the original band never did. The do an impressive job of it. And then we get some other Queen hits.

What’s particularly striking about this band, though, is just how much singer Marc Martel sounds like Freddie Mercury. You’d occasionally swear this is a new recording by him, which is a mix of awesome and weird. The album is not available for streaming, but must be acquired from Pledge Music.

Favourite track: “The Prophet’s Song”. I dare you to not be impressed by it.

Not every song is a home run, but this is an uplifting, positive release from this hometown artist.

Favourite track: Bigger Than That (“You put up a wall, but I’ll climb it like a cat. Cause I am bigger than that.”)

(David Bowie’s Blackstar is also worth noting, but you all knew that already.)

And I also liked everything Adam Lambert released this year:

Gorgeous official video for Welcome to the Show

Did pretty well with live shows this year, and since I blogged about each at the time, I don’t have it go on about them again. In order of greatness:

(You know it’s quite the year if on my favourite bands of all time is third!)

Via semi-legal webcast, I also enjoyed the Queen + Adam Lambert Rock in Lisboa, and by totally legal national broadcast, the Tragically Hip’s last show of their tour.

It didn’t occur to me to compile a list of particularly good podcasts, but I did spend part of the Christmas break working through Wired’s recommendations. Good list, though I have concluded I’m not really a fan of fiction podcasts, even if well done. 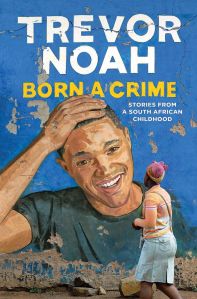 Easy, because I only finished one (not enough road trips this year): Trevor Noah’s Born a Crime. This book has been well-reviewed and I can assure you, it’s deserved. His life is fascinating, and he tells it well.

Trevor Noah was born in South Africa, during the Apartheid era, of a black mother and a white father. Their relationship was illegal; hence, “born a crime”. He spent much of his early childhood indoors. When out with either of his parents, a ruse was necessary. He’d walk with a lighter-skinned friend of his mother’s, and his mother pretended to be maid. He walked across the street from his father.

Apartheid ending just changed the complications of figuring out where he fit in.

Though it’s his life story (and does not include the tale of how he became a successful comedian in South Africa, and ultimately star of The Daily Show), his mother is the real star here. What amazing woman, to be so strong and independent in a society that gave her no training or support for being so.

Noah does narrate the book himself (unabridged) and does a great job of it. It’s fun hearing him read out the various African languages and to get the proper pronunciation of everything. It wasn’t a very easy life, but as comedians will, he pulls many funny moments out of it nonetheless. One of the best things I heard this year.