The Timmins evacuees arrived and departed in waves: first to get there were Jean and I, the evening of December 22; then my older sister, Joanne, followed shortly by my younger sister Michelle and her family, on December 24. Boxing Day was the first departure, by Jo; then Jean and I drove back on December 27; then Michelle’s family flew back the following day. Some small departure delays due to weather and a bit of a close call getting through the very crowded luggage drop-off at Pearson were the extent of the travel issues.

The influx of people made gave my Dad some stress in keeping us all fed and finding everyone a place to sleep, but it all worked out. It helps that Dad’s a very good cook, and yes, we all pitched in with grocery shopping, baking, food prepping, and cleaning up. Michelle and Jackson kindly volunteered to sleep on couches the two busiest nights, so no one had to check into a hotel.

Even Santa was helping with the food

The 23rd we had a great visit with our Timmins friends (all two!) and Christmas Eve offered a succession of family Réveillons. 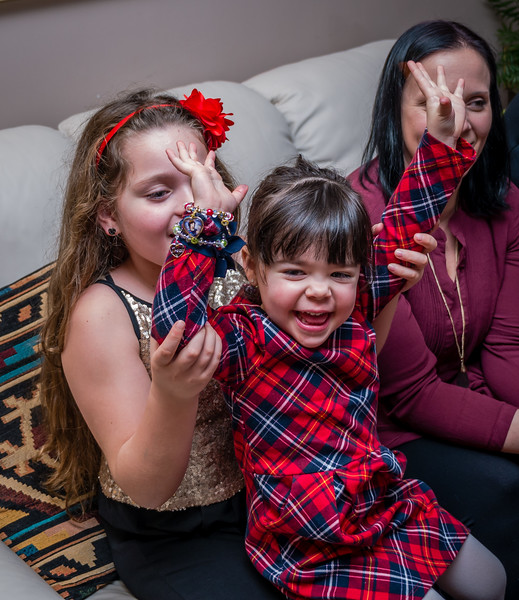 The little gift exchange theme this year was “ornaments”. Jean’s made the biggest splash: He Etsy’d his own ornaments starting with old photos of his siblings, converted into luggage tags then ribbon’ed by hand. My contribution of ornaments made by Peruvian artisans landed well with Jean’s sister, who had just returned from a trip there. Jean ended up with these rather cool bird ones. 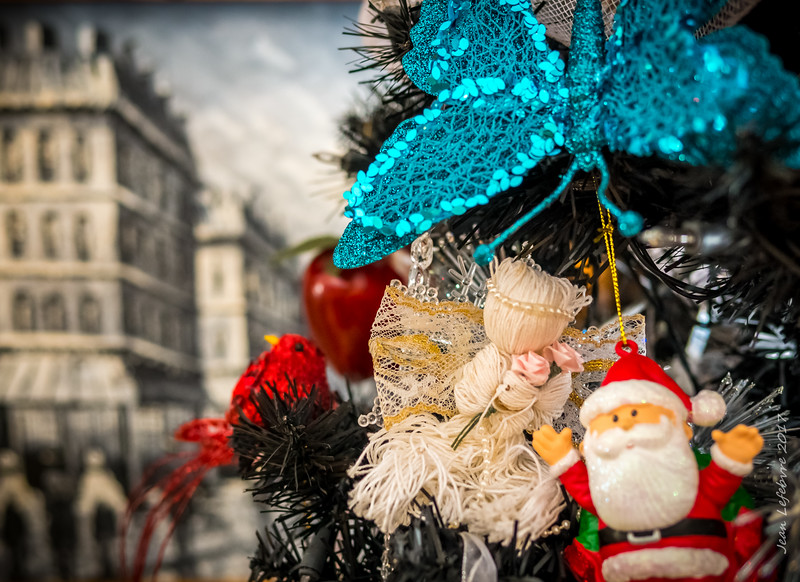 New ornaments for our tree

Christmas morning at McNair’s we did the stealing game again. This was after much email discussion, during which we’d decided that each person would get an age-appropriate gift. Of course, the kids don’t really do their own shopping for this.

My brother, for whom there is time like the last minute, was copied on all emails but didn’t really dig into them until about Christmas Eve, when he was off to do his shopping. He checked with Michelle: “I have to buy gifts for my own kids?” he asked. “Really?”

This didn’t really work out with Sarah-Simone, though, who—even after “her” present was available—simply couldn’t resist going to the pile of presents to try again after some adult  kindly “stole” the present she had. Even though, as she pointed out, most of the presents “sucked” for a 10-year-old.

Another gift not entirely suitable to its recipient… 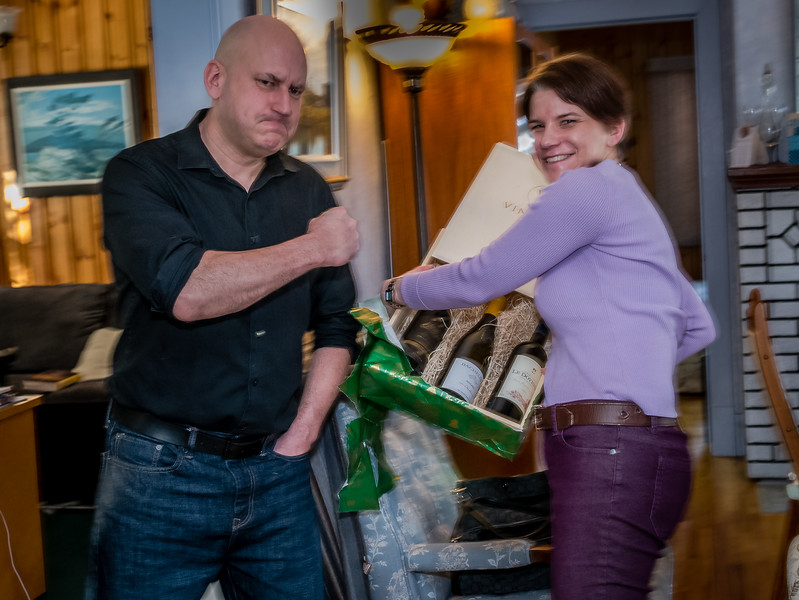 Or in my case, earlier, by stealing this fine wine collection from my brother

Jean ended up with the item I had contributed, a coffee infuser. It’s not fast, but it does make a nice smooth brew!

We also got out for some snow shoeing on this gorgeous winter day. 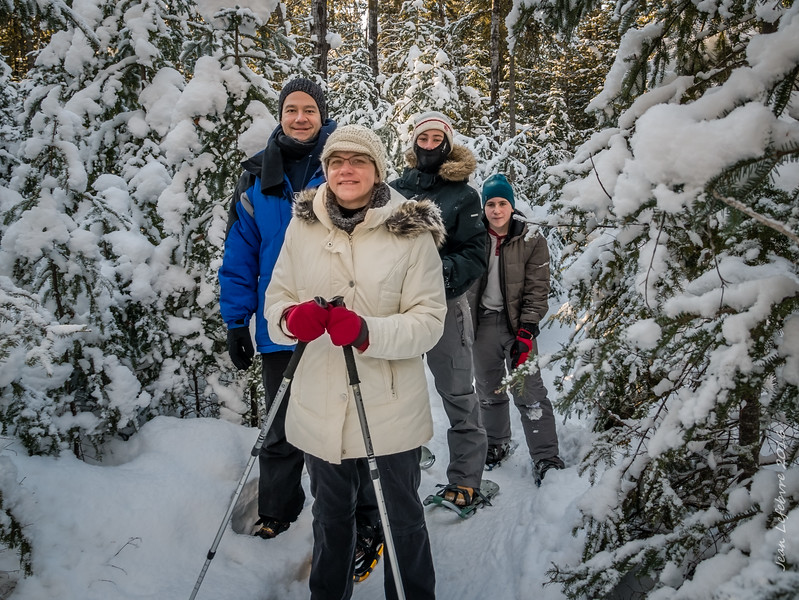 Jean and my brother-in-law went again on the less-pleasant Boxing Day, coming back with a harvest of chaga tea (which looks like dirt mounds, but you clean it and brew it and it’s apparently full of anti-oxidants. Pretty mild-tasting.) 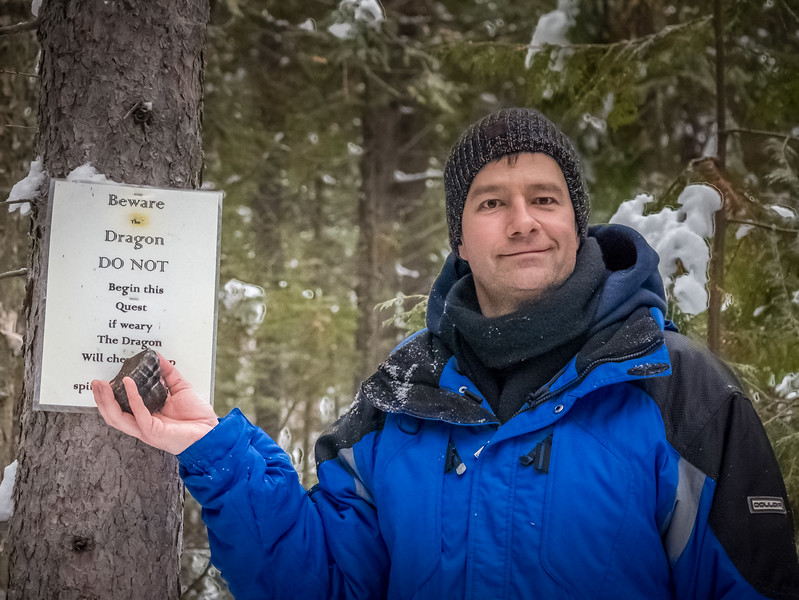 The days between Christmas and New Year’s, Jean worked while I sat around and ate bonbons.

New Year’s Eve, we returned to The Berlin, one year after first going, for their four-course dinner. City buses are free that night, so we decided to travel that way. We did the whole route-planning thing on the transit website, and found the perfect trip. As long as all buses were exactly on time.

However, the first one was three minutes late, meaning we missed our transfer by about two minutes. And faced a 28-minute wait, 30 minutes before our reservation.

Fortunately, seeing our expression, the bus driver asked where we wanted to go, then helped us get there. Her route had another stop with a downtown connection. We had very little wait for that bus, and we were arrived at the restaurant just five minutes late, so all good.

We sat in view of the kitchen for the first time, which was pretty interesting. (And not only because chef Jonathan Gushu is kind of a babe.)

It was busy night there, of course, but everything we had was just delicious, and the wine pairings were creative and uniformly excellent. Service was a bit scattered at times—running off with menus before actually finding out what we wanted each course, for example (“I can’t believe I did that”, he said)—but generally they have their timing down now. (We just have to accept it’s not as luxuriously paced as Verses used to be.) 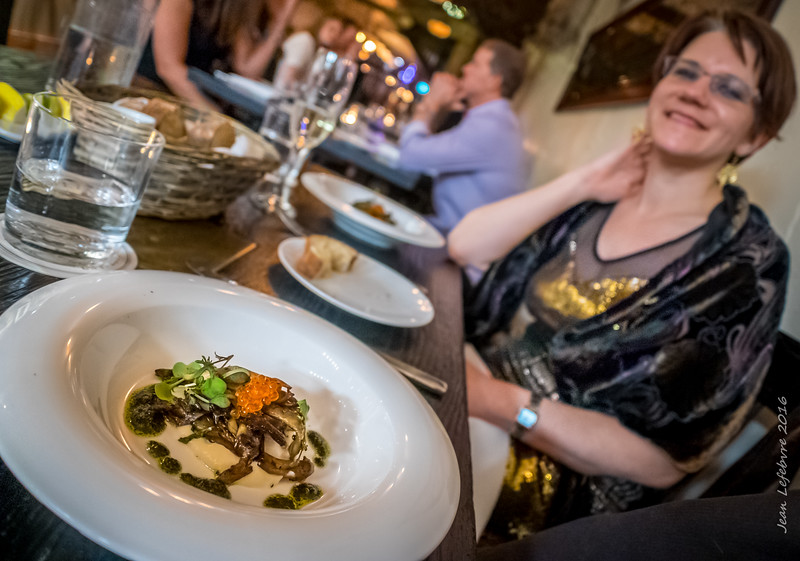 As appetizers, I had the lobster ravioli and Jean the terrine. 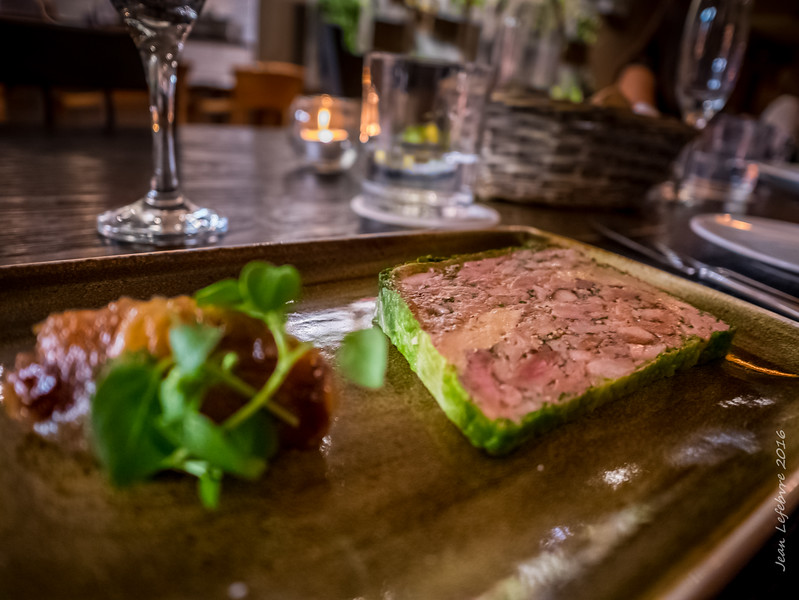 To cleanse the palate, they gave us a pineapple sorbet in sparking wine.

Then it was duck all around, with a really interesting Italian wine, that not everyone got (we’re special 🙂 ). 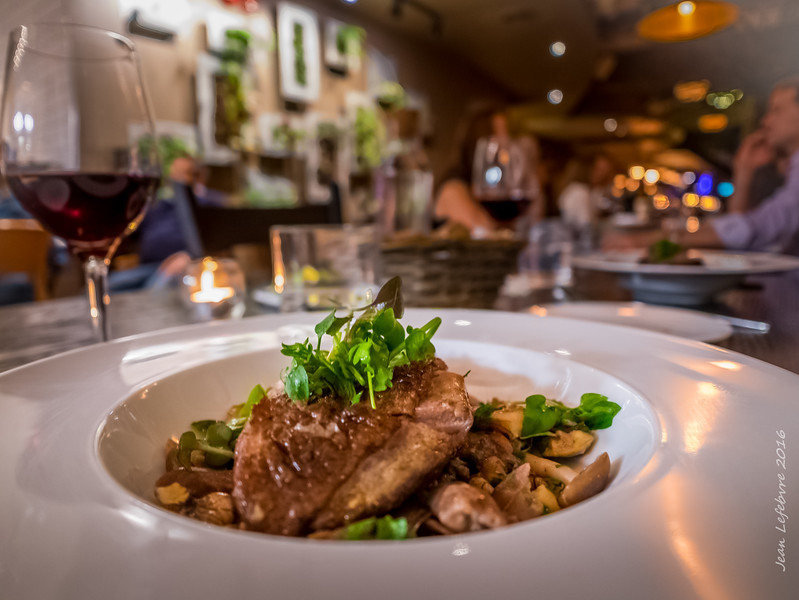 And Jean concluded with the pear dessert, I the hazelnut nougatine (with a vermouth). We also received a touch more dessert for the road. 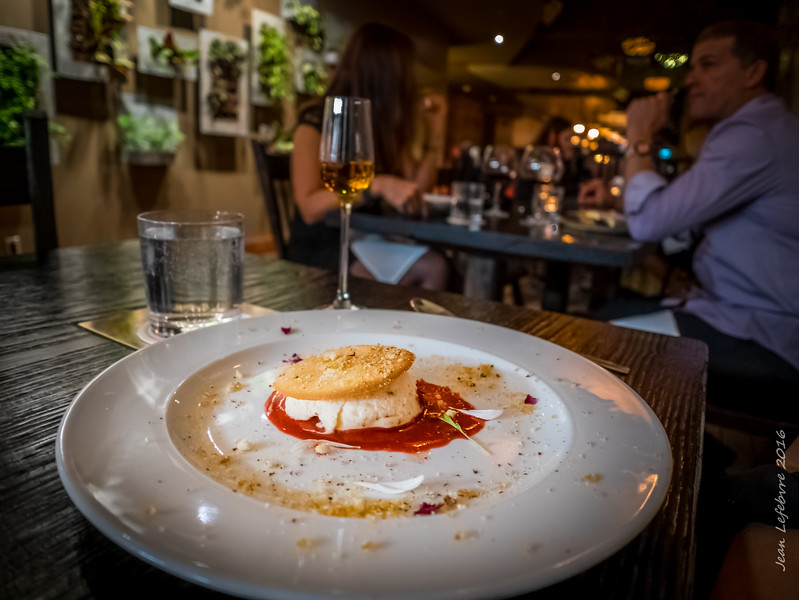