Last weekend was when the first digit of my age increased. It wasn’t so traumatic. Maybe because I’m not that given to self-reflection anyway. Maybe because I made sure it was a pretty busy weekend.

Friday night we went to see Shaping Sound: Behind the Curtain at Centre in the Square. Shaping Sound is Travis Wall’s (from So You Think You Can Dance) dance company. The show presents a continuing, 90-minute story (with intermission). It starts with a whole lot of text—in the form of surtitles showing the story that Ttavis’s character is typing out—and not much movement. So many characters are presented, I was a bit worried: How was I going to follow all this and keep track of everyone?

But as it progresses, the dancing increases, and the narrative becomes increasingly fragmented: Literally, as the surtitles become just parts of sentences, and finally just a few letters. And you realize this isn’t a plot you’re meant to follow linearly. This is an emotional journey. This is the mind coming to terms. With coming out, among other things.

I thought it was pretty great. Jean said I got way more out of it than he did. But he still enjoyed the time in the lovely member’s lounge, as we always do.

My friends got wind of my round-numbered birthday this year and offered to take me out, which was really sweet. Especially as they selected the finest restaurant in the area, Langdon Hall. We were there on the Saturday night, and though nobody had the multi-course chef’s menu, we still managed to stay there for four hours and barely realized it. That’s some fine conversation!

The ladies at Langdon Hall

The food didn’t suck, either. The amuse was a pork roulade. We were offered a choice of bread, and the gluten-intolerant were given a separate, very fresh alternative bread.

As an appetizer, several of us had the light and delicious crab with apple and sorrel sauce.

As the main course, lamb was a popular choice, but I went with the venison with cabbage and foraged mushrooms.

For wine, we shared a bottle of a 2005 French burgundy (I think that was the grape), and I was very impressed at the staff’s ability to dole it out in tiny increments among the five of us so that it more-or-less lasted through the two first courses. (Though Sherry and I, who didn’t have to drive, did have another glass of a Syrah of completely different style.)

Dessert ran the gamut of options at the table, but I couldn’t resist the dark chocolate with coconut, cilantro, and lime.

And Sunday? Well, here’s the thing. Before this friend outing was arranged, I saw that Langdon Hall was having March specials, whereby if you booked a meal (supper / breakfast) and accommodation package, they gave you a $100 credit to use. March 5 was one of the nights the special was in vogue, meaning that Sunday… I returned to Langdon Hall. This time with Jean.

We first drove past the place, though, to go for a walk along the nearby river. It was a nice sunny day, albeit cooler than it had been, and we did get some nice views. On the way back, I got a call from my 87-year-old aunt. She used my home number, but I thereby confirmed that the VOIP app (this is new to us) worked in my being able to pick up home calls on my cell phone. It was good to talk to her.

Then we went to check into our room.

I’d say the difference between Langdon Hall and other reasonably nice places we’ve stayed in are in the details, such as:

And dinner was very fine again! Though somehow it didn’t take Jean and I four hours to get through it on the quieter Sunday night. 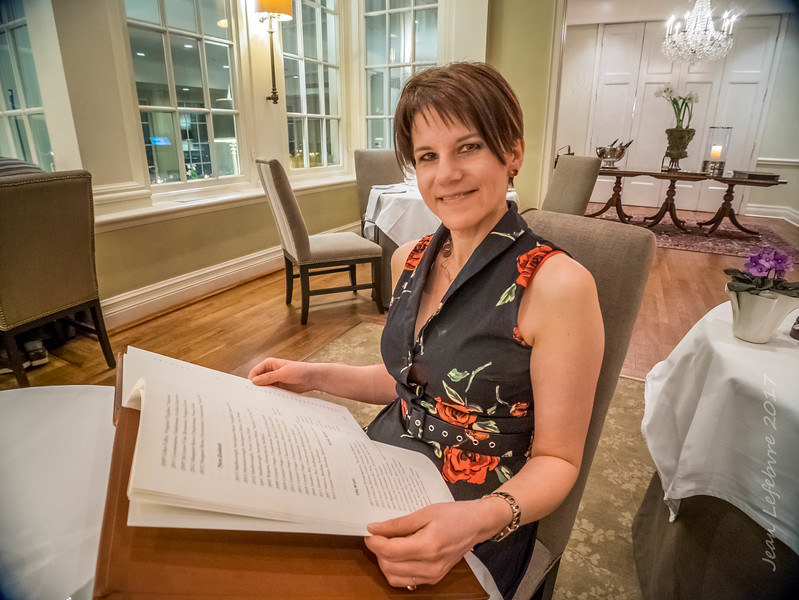 As on the Saturday, we discussed wine options with the sommelier—given that there are a crazy number of options here. Jean got him excited, though, by asking about the possibility of a Grüner Veltliner wine with the scallops. We thereby found out that it’s actually a quite versatile, food-friendly wine, but because of the richness of the scallops, the sommelier suggested something else, and since we were clearly “adventurous”, ran off to the wine cellar to figure out what (though we dampened his enthusiasm a bit by giving him our wine budget).

We ended up with a German pinot blanc that was quite enjoyable. It tasted semi-dry even though it was not, which made it quite fine on its own as well as with the scallops.

The dinner menu was the same, of course, but they brought out a different amuse, this time a nice, light crab mousse. The breads were also different—really nice raisin hazelnut option this night.

As appetizers, I went with the borscht en gelee with trout roe, which was quite fine as long as you’re good with beets and “popping” fish eggs, which I am. Jean had the sweetbreads with those delicious foraged mushrooms.

The afore-mentioned main course of scallops and cauliflower, which we both ordered

For dessert, Jean was all about the cheese, while I resisted the chocolate this time and tried the honey mousse with peanut butter sable and chocolate fudge (OK, I guess I didn’t resist the chocolate at all).

Breakfast the next day consisted of one “kitchen selection” plus access to their nice buffet of fruit, smoothies, pastries, and such like. I had the fried duck egg with pork belly. The duck egg was bigger than a chicken egg, but tasted much the same. Jean enjoyed the soft scrambled eggs with crab and trout roe. (Yes, they’re very big on crab there.)

And then we both had the rest of the day off work, which was nice in itself.