“Where is Kingsville?” queried my sister, after realizing we’d arrived in Toronto from there, and not from Kingston, where we were headed next. (We’d dubbed this our Royal tour of Ontario—Kingsville, Kingston, and a stop in Toronto for a Queen concert.)

It was a fair questions, as Kingsville, population 21,000, is not exactly a tourist mecca. It doesn’t boast great museums or incredible natural wonders—only a rather charming downtown, a proximity to a number of Lake Erie wineries, and access to Point Pelee, Canada’s southernmost national park. A week there would likely be rather dull, but it’s a nice, relaxing place to spend a couple of days. 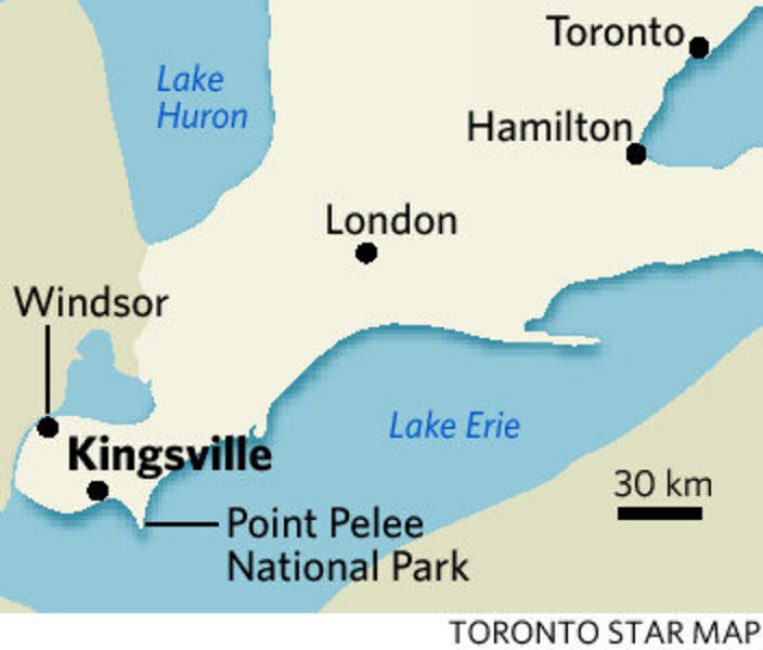 We’d previously had some challenges with the hotels we’d stayed at in these parts, but we were quite happy with the Kingswood Inn this time. For $130 a night we had use of a living room, window dining, kitchen stocked with breakfast food, and upstairs bedroom and bathroom, all in a large, attractive historic home. The wifi was good and the TV even had a Chromecast, for ease of Netlix-ing. There was even a pool we could have used (but didn’t).

The Inn was also within easy walking distance of the lake and the downtown. We noticed that the area, being that much more south, had more and different fauna (like fireflies—so many in the evening) and flora than in our parts.

Mind, we do have daylillies, but this photo does show the beauty of this little town on the lake

Our big activity was on Sunday, spending a morning and early afternoon in Point Pelee Park—free this year in honour of Canada’s 150th. It was a gorgeous day, and we hiked most every trail they had. All the trails on the short side, but combined it did add up to something like 12 km. Fauna-wise, we saw a mink carrying a fox snake in its mouth; a turtle; some small frogs; many kinds of birds (we don’t know birds; couldn’t identify most), including one spot where the babies were still in the nests; and what I assume were wild turkeys. 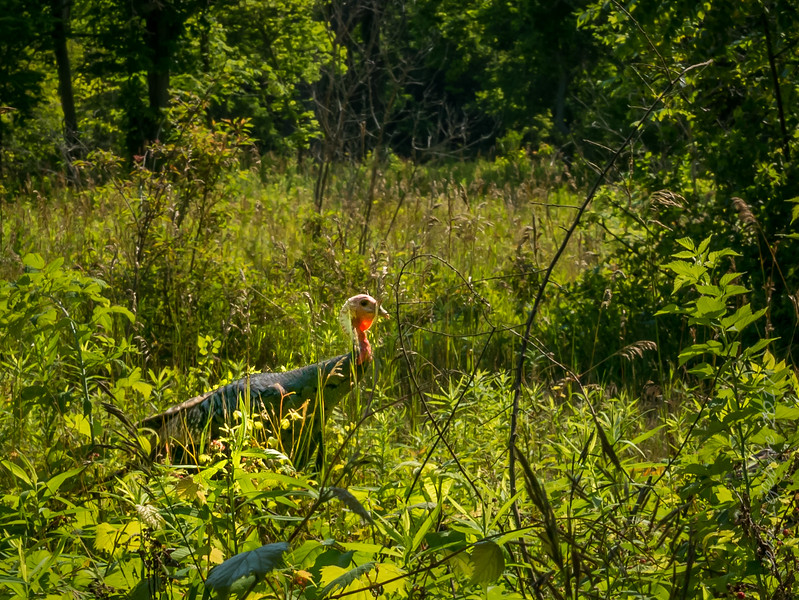 Free as a bird—not destined to be Thanksgiving dinner

We also sat in on a park presentation on the fox snake, featuring a specimen that was born into captivity. It’s an endangered (because it looks and sounds like a rattler, though is harmless to humans), not every well-understood species of snake that they are studying in the park.

While out walking, we also saw some more exotic-looking flowers…

And a very interesting-looking swamp (no bugs here, by the way)… 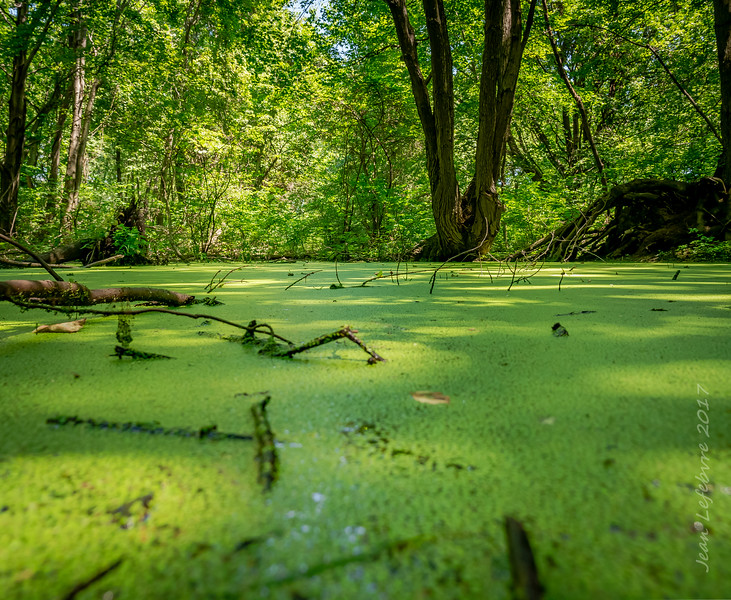 Discovered that cactus (!) grow in this part of Canada…

And also saw some signs of the previous inhabitants of this area, before it all became parkland.

The southernmost point, past the 42nd parallel, is demarcated. Traffic is controlled into this area, to preserve it. Individual cars are not allowed; you have to walk in (as we did) or take a park shuttle. The waves are huge at the point. The Great Lakes always amaze me, as they look like an ocean, but it’s all fresh water.

Of course, we also visited a few wineries while in these parts. We had lunch at Cooper’s Hawk, but they were busy with a couple of tour groups, so we didn’t do any tasting beyond the glass we each had with lunch. Viewpoint Estates was also very busy, but we pushed ahead anyway, trying a number here. In the end, we were only really impressed with the Cabernet Franc 2008.

And with the view that gave the winery its name

North 42 [named after the parallel—which we realized only the next day, after visiting the park] was new one for us this time, and the one we were most impressed with. For one thing, despite a tour group arriving shortly after we did, we still got a lot of personal attention. (They had the group in a separate area.) For another, a lot of their wines were really nice. They made a sparkling out of Sauvignon Blanc, which is very unusual but very good. They had Cabernet Franc from 2013 and 2016, both of which we liked. And a well-balanced dry rosé made from Cabernet Sauvignon grapes.

The other new one we visited, largely due to its convenient location after our park visit (the other wineries, we visited Saturday) was Pelee Island winery. It’s a large operation, but not that busy when we were there. We focused on wines they don’t sell at LCBO, but weren’t bowled over by too many. We did get a Pinot Blanc and a Gerwurtz Reserve. 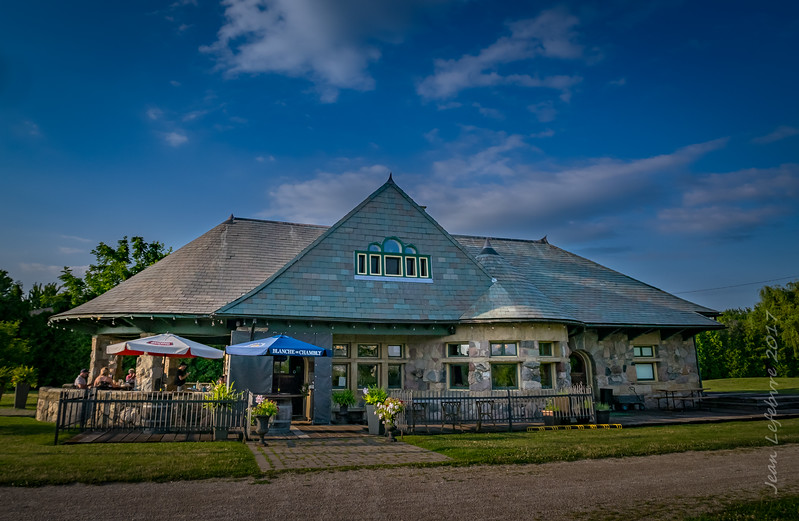 Mettawas Station restaurant is housed in a former train station

For dining, Mettawas Station once again proved the best option in these parts (though the lunch at Cooper’s Hawk and the dinner we had at another Italian restaurant downtown were both decent—just not as good as Mettawas). We shared a lamb rib appetizer that had good texture and flavor, then I had a salad while Jean had zucchini soup, and my main was the local pickerel and perch while Jean went for the gnocchi.

We also got into a conversation with another couple who were there for their anniversary (37 years, I think?). We told them that ours was also coming soon.