We took a week off in July in lieu of the one originally planned in June, when Jean’s work commitments meant he couldn’t get away. We had to go to Toronto on Tuesday, July 18 anyway, because we had tickets to a Queen + Adam Lambert concert. We built the rest of the vacation around that. 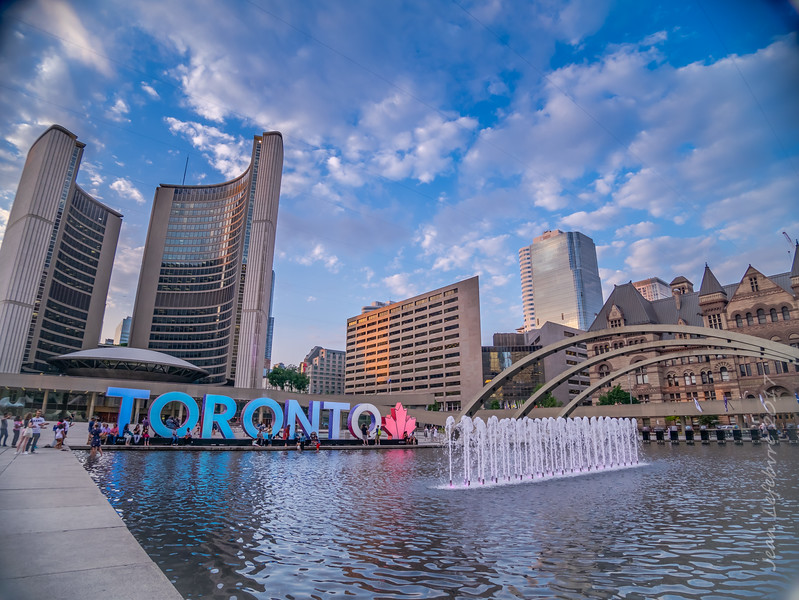 The city can look purty

We’d first thought of going to Québec City after Toronto, but that’s a really popular destination this time of year. Finding a hotel was a challenge, and we started to think it would just be unpleasant with so many people crowded into the Old Town there. We switched over to Kingston, which is much less of a drive, so thought of adding a day in Toronto.

But Toronto is also a very popular destination this time of year. And while we could have stayed at our hotel an extra night, the price for that extra night jumped dramatically. (And this was for a hotel room that was probably the smallest we’ve ever had in Canada. Mind, the hotel itself—the Strathcona—was very conveniently located downtown, though something of a nightmare to drive to and expensive to park at.) So, we decided to stick with just two days in “The 6”. 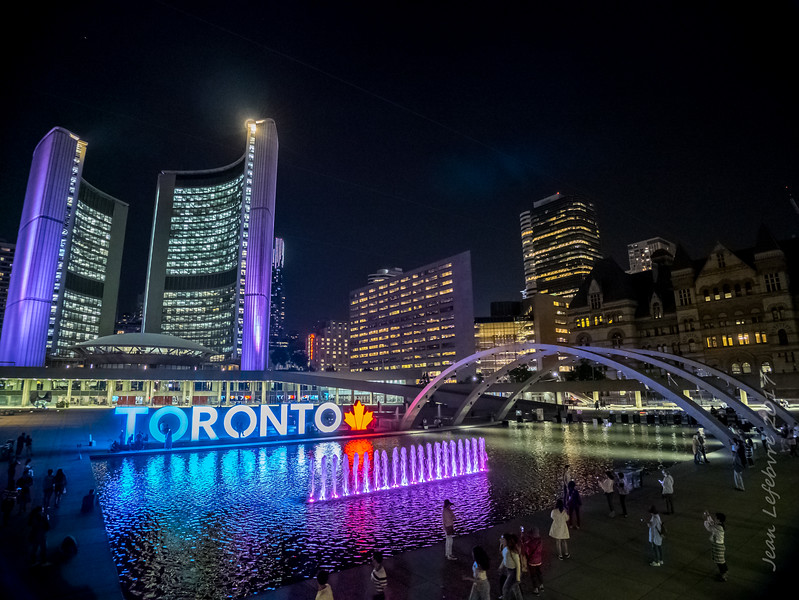 We took some time while there to visit my sister and brother-in-law in their lovely new apartment. That didn’t leave much time for doing Toronto “stuff”. Mainly, during the day, we walked around various neighbourhoods: The Harbourfront area, the Distillery District (highlight: visiting the Soma chocolate store), Kensington Market.

It was great weather for walking

Unofficial poster. Seems to be one of these for each stop.

You see this warning sign? This show has strobe lights, it has lasers, it has smoke, it has explosions. You name it, this show has it. You’re allergic to any of these things? I suggest you go home now.

It was the first time I’d had to go through a metal detector at an Air Canada Centre concert, but all the ACC staff (like the one quoted above) were really very cheery and nice, helping everyone out to ensure we all got through quickly and safely. This was a relief to Jean, who’d been worried on seeing the lineup when arrived. As was the fact that we had no problem getting his camera in (only “professional” cameras were banned, but what is that?).

We sat next to a woman from Newfoundland, a fan of Queen but especially of Adam Lambert, who’d flown up special for the concert. (Jean shared that we’d flown all the way to Berlin for our Adam Lambert concert.) Her husband was in town with her, but not at the show, which caused Jean to give me a look. Well, he couldn’t very well abandon me on our 25th wedding anniversary night, could he? 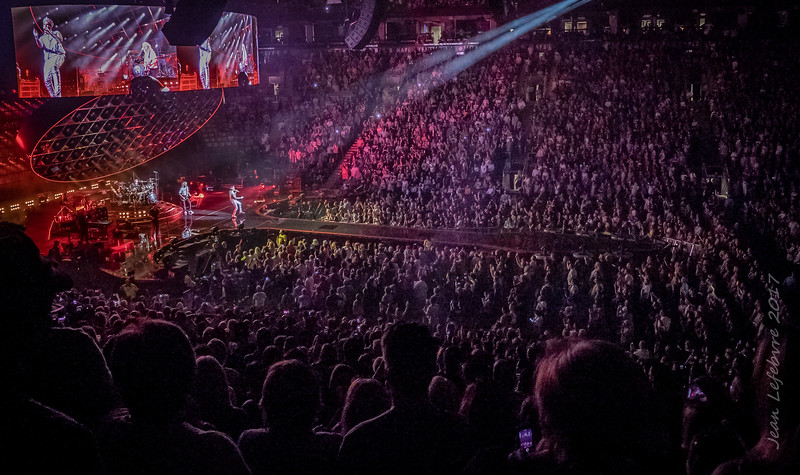 Our view was from here—and it actually wasn’t bad. Though Jean complained that they played more to the other half of the room.

And truly, it was a really great show. Would have been a shame if he missed it.

The staging, the lights, the effects

I’m not sure I’ve ever seen better. Before the show started, we could tell the stage was in a guitar shape, but were having trouble figuring out how things (like the projection screens) were laid out… Then the show began with this huge robot hand smashing through the screen, then looking out, then raising it with both hands to reveal the band playing “We Will Rock You.” Awesome!

Other highlights included Adam Lambert literally rising from the floor to sing the exquisite “Who Wants to Live Forever”; the stunning laser show; the effect of a simple disco ball in a stadium; the interesting, multi-level video background for Brian May’s solo (built around the Queen logo, deconstructed); and the stunning amount of confetti at the end. 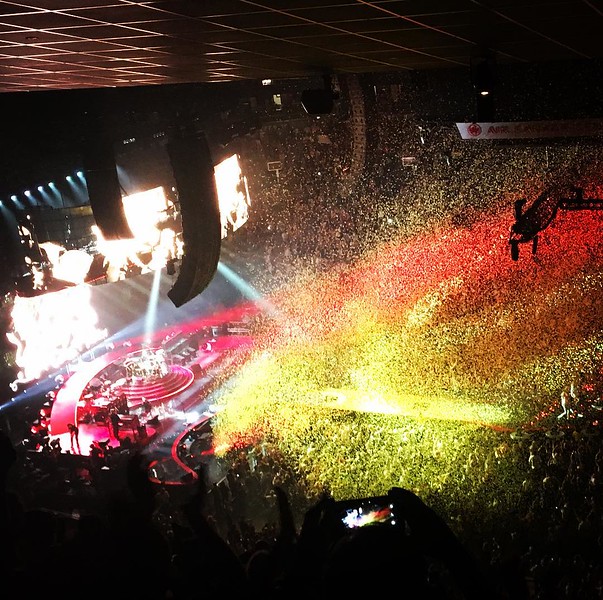 Of course I love all the songs. But the band also performs them so well—without vocal modulators or click tracks. And, the sound mixing at the ACC was quite good. So I could hear Adam Lambert’s impeccable, incredible vocal flourishes on songs like “Don’t Stop Me Now”, “Somebody to Love,” and “Who Wants to Live Forever.” And the band’s excellent harmonies on songs like “I Want It All”. 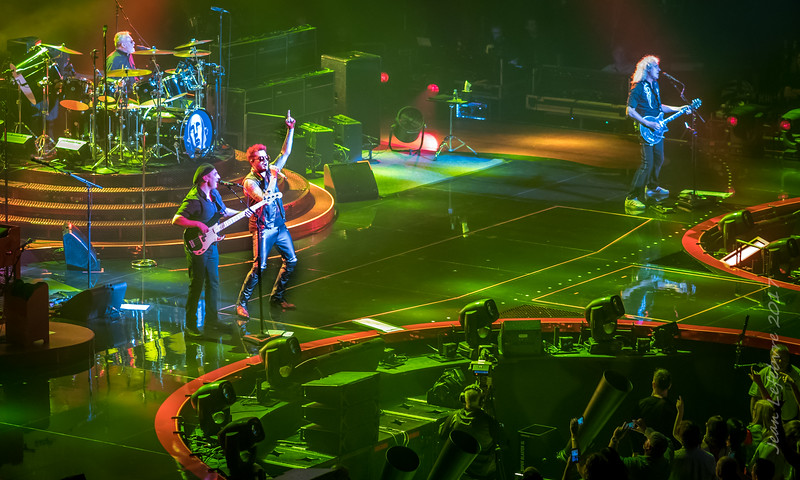 The drum battle between Roger Taylor and new recruit (from Queen Extravaganza) Tyler Warren was fun. And the guitar solo—which I’d been dreading a bit, having found it somewhat long and dull at their last concert—was fantastic. It was shorter, for one, and all built around familiar melodies (at least to a Queen fan) from “Lost Horizon” and “Brighton Rock”. Kudos.

The set list is designed to take you on an emotional journey. You start with the powerful adrenaline rush of a snippet of “We Will Rock You,” followed by the powerhouses “Hammer to Fall” and “Stone Cold Crazy.” 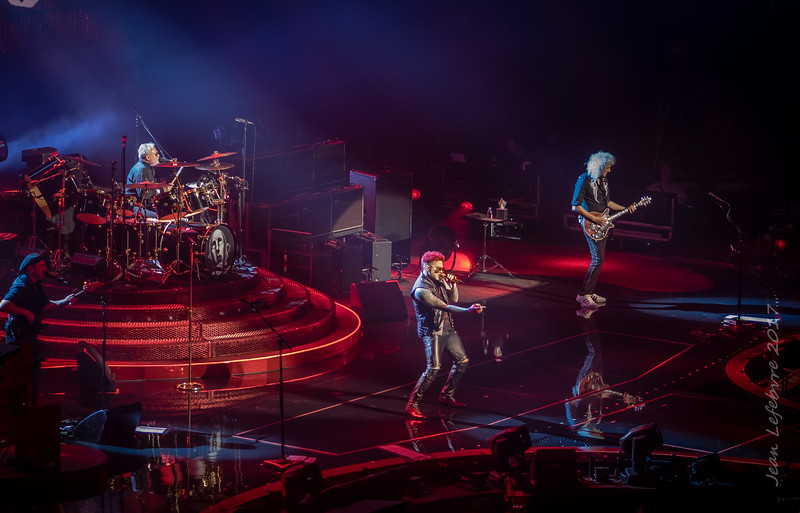 There is then a gradual segue to the fun and frothy part of the evening, introduced by Adam Lambert singing “Killer Queen” atop the head of Frank the robot, while wearing a hot pink suit. (“Gayest suit ever!” he proclaimed.) Included at the juncture was an Adam Lambert single, “Two Fux,” along with “Don’t Stop Me Now” and “Bicycle Race,” wherein Adam rode around on a pink, flower-laded tricycle. 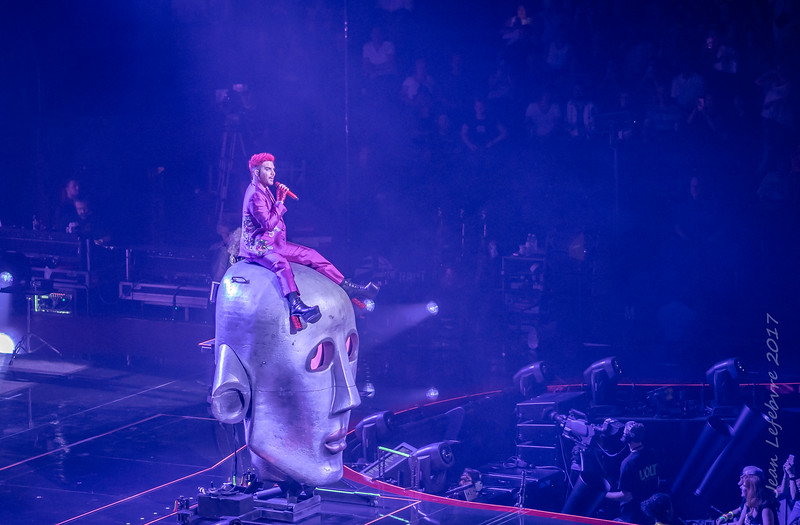 Thanks to Adam’s super-tights pants, propensity for hip thrusting, and just general handsome-ness, the entire evening was somewhat lust-inducing (if you like that sort of thing).

But they really amped up to 11 on “Get Down, Make Love,” a welcome addition on this tour. The whole backdrop for this song was red, dripping, sexy imagery, which Lambert only enhanced with his orgasmic vocal prowess.

But Adam wasn’t the only significant contributor to this portion of the evening. Roger Taylor took lead vocals on another recent set addition, “I’m in Love with My Car,” a song that really shouldn’t be sexy, but somehow is, the way he sings it.

Brian May? Well, he introduced the poignant part of the evening, moving to the front of the stage to sing “Love of My Life,” accompanying himself on accoustic guitar. The effects here were a sea of cell phone lights, which was just beautiful. And though I knew that video Freddie Mercury would make an appearance near the end, the way they did that, with Freddie seeming to stand right beside Brian, I couldn’t help tearing up.

Through “Somebody to Love”, and “Under Pressure,” and “Radio Ga Ga,” [aside that I’m not listing every song they played], the band managed to create a more intimate feel in this large space.

So close you could touch them. (Not really.)

Of course, the ending was triumphant. I liked how they rejigged “Bohemian Rhapsody.” They included the usually skipped “Is this the real life?” introduction, with Adam taking lead vocals. He also sang both verses, instead of sharing those with video Freddie. Of course, the operatic part is still from the original video. Freddie just appears at the very end, trading off lines with Adam.

The finale? “We Will Rock You / We Are the Champions,” of course. Full Toronto set list

The crowd was really great (as I usually find with Toronto). I thought we’d spend most of the concert sitting, but no, they were up for standing for probably three-quarters of the show. Brian May’s birthday was the following day, when there was no concert, so we got the fun of singing “Happy birthday” to him, after he honoured us with a selfie stick photo (posted here: https://www.youtube.com/watch?v=Vw6i-QMjSuY). At the end, Adam thought Brian should wear his crown (though that proved a bit of a problem, as it was sized for Adam’s bigger head).

(This is turning an epic post, but why stop now.) The evening before the concert, we’d originally hoped to dine at Canoe, but it was summerlicious time in Toronto (that is, specially priced meals at certain restaurants), which meant that Canoe was fully booked for two weeks. (And that likely happened on the first day summerlicious reservations were open.)

So, we went to Richmond Station, a new restaurant for us, even though we couldn’t get in til 8:30 pm. We’d read that they offered surprise, multi-course “chef’s menus”, but that wasn’t mentioned on their printed menu. Jean asked about it, though, and they confirmed that it was on offer, and the head chef was in that day, so it should be a good one.

They also asked us if we had any special occasion, and Jean mumbled something about, no, we’re just here for a darn Queen concert, but I piped about it being our 25th wedding anniversary the next day. That was good, because it resulted in a complimentary glass of bubbly each, to go along with our half-liter of (delicious) Oregon Pinot Noir that we thought should be generally food friendly. 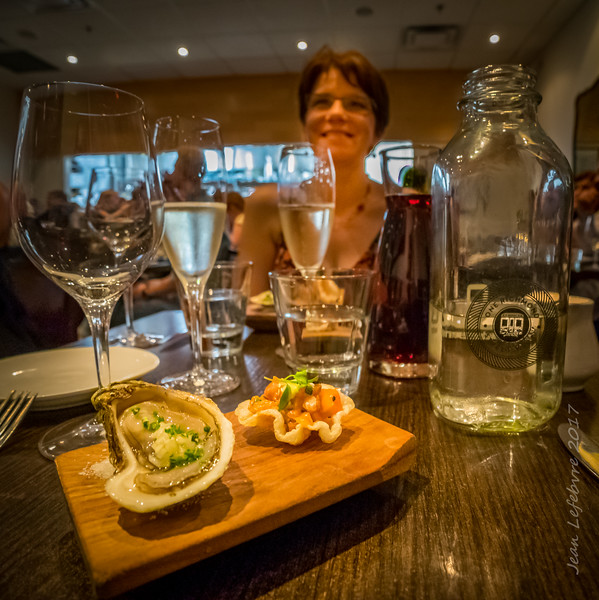 The bubbly with our first course, oyster and trout tartar

What a nice meal we had there. All courses—eight of them—were prepared with care and delicious. The service was attentive. Our late start meant that we had a waiter switchover near the end, but that was handled very well. Tables were close together, so it was a bit loud, but that somehow didn’t bother us. And the whole thing was like, $200? Which seemed a great deal for a meal of this caliber in Toronto.

Beef tartar is not a thing I normally eat, but theirs was flavored very well. There was a small charcuterie plate. This amazingly light zucchini tempura. A set of two salads: one beet, one tomato, both great. [I feel like there might have been sweetbreads in here somewhere also?] Seared salmon with great vegetables. A smoky sirloin beef with potatoes (the smoke made it special). 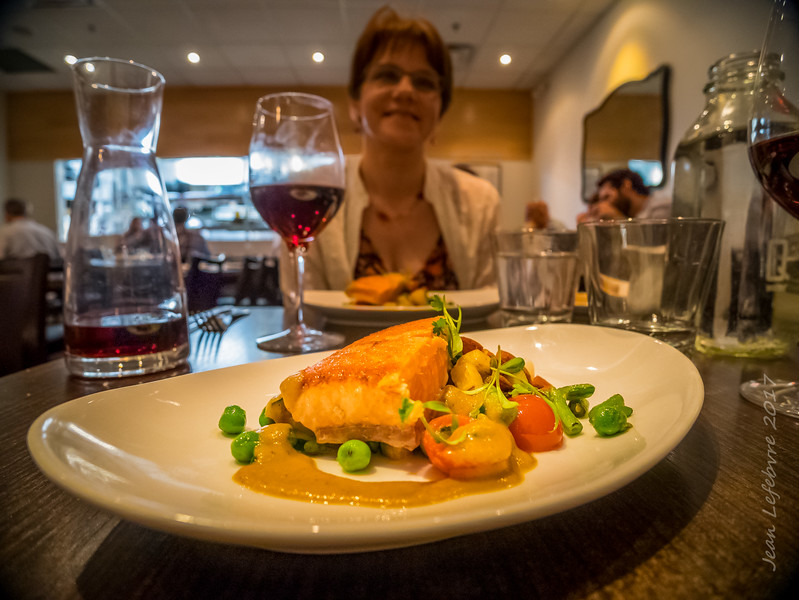 It was all topped off by a very special dessert of ice cream, peanut butter, and hazelnut. 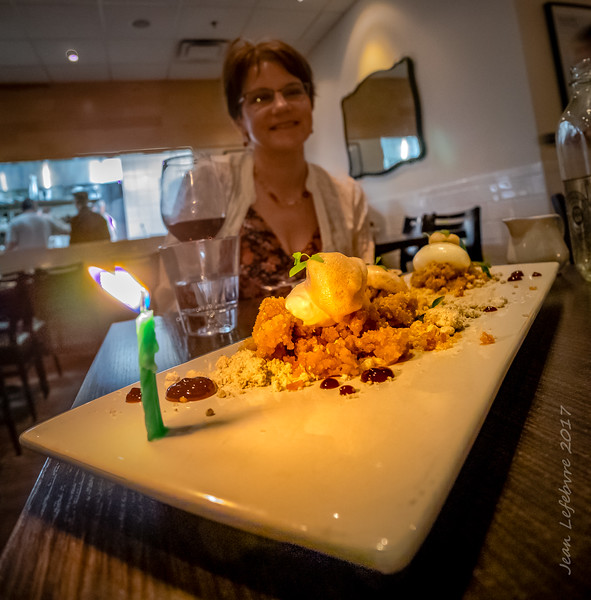 Before the concert on Tuesday, we went to our reliable Ki, where they once again did a really nice job of their “modern Japanese” food and excellent service. 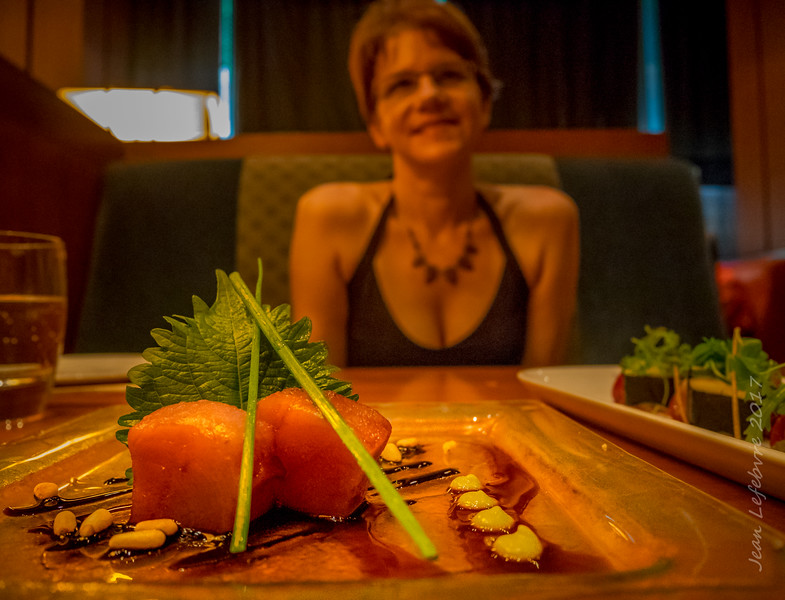 I think this is dessert

2 thoughts on “The Royal Tour Part 2: Queen for a day in Toronto”