We’d been to Kingston before, but not stayed for any length of time. This year we booked three nights at Hotel Belvedere, which dates back to 1880. This meant some awkwardness in the room design, like a tiny bathroom with no counter space, but overall the room was spacious. (It was also equipped  with modern conveniences like air conditioning and wifi.)

Our stay included a light breakfast that we ate on the front patio each morning, which was quite pleasant. And it was just a short walk from there to downtown. 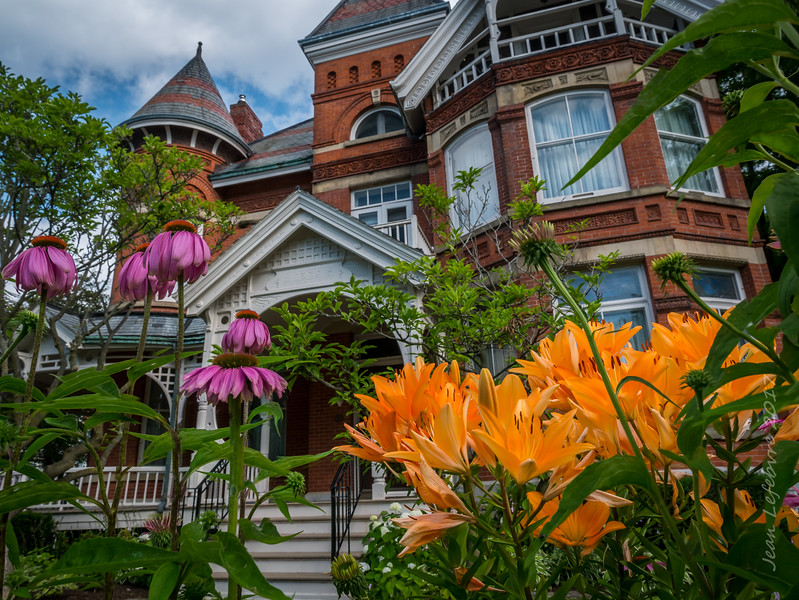 Not the Belvedere Hotel, but in the same neighbourhood

The first day we just got acquainted with the downtown and the waterfront. 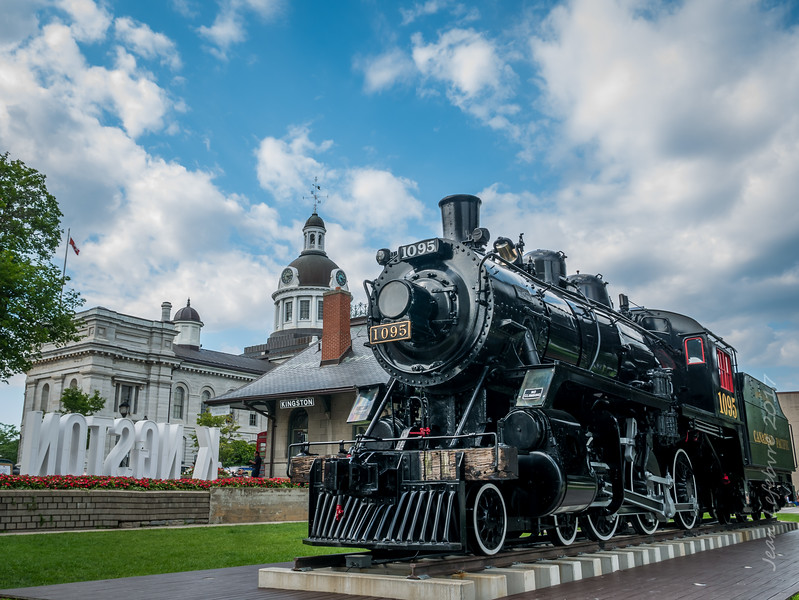 Over the next two days, we took in a number of tours.

First up was a tour of Kingston City Hall. It was originally built with the thought that Kingston was to be Canada’s capital, and so that it would serve as Parliament. Of course, this was not to be. Queen Victoria had other ideas, and declared the hamlet of Ottawa the capital. Canada’s Parliament was built there.

That left Kingston with a bit of a dilemma over what to do with this large, ornate building. Over the years, a number of business have been housed there: banks, night clubs, dry goods. More recently it has served as City Hall. But it’s a challenge to maintain, because a city doesn’t have the same budget for this that the whole country does. So they have to do fund-raising to tackle renovations of parts of it, and when touring, you can see signs of what still needs work, like the stained carpeting. 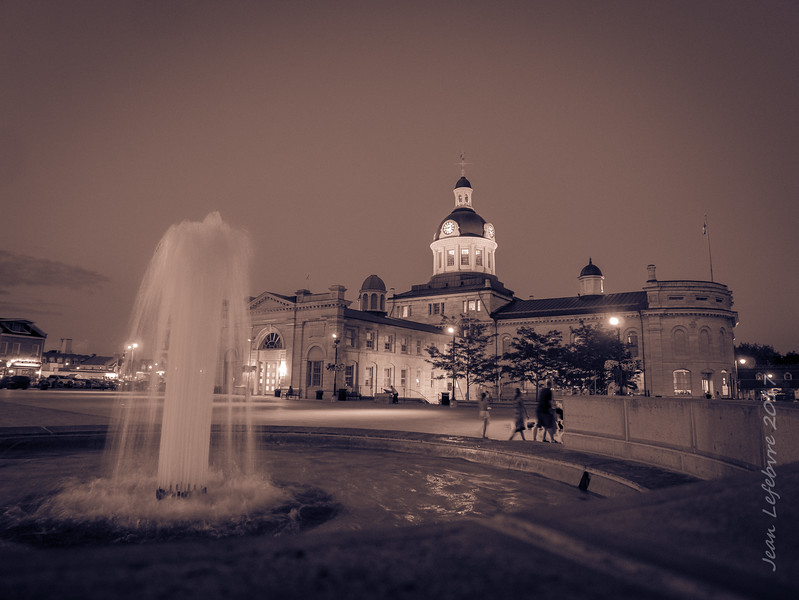 A market was also set up outside it on the Thursday. I purchased a couple of hand-dyed T-shirts there, to join my Queen + Adam Lambert concert T-shirt and the two shirts Jean purchased at MEC in Toronto. (We then declared a shirt moratorium.)

The next tour, in the afternoon, was of Kingston Penitentiary, a maximum security facility that closed just a few years ago, as it no longer met modern standards. A young tour guide led us around and explained some aspects of the facility (the visitor’s area, the family visits housing, escape attempts), but at many points we were greeted by someone who used to work there. They explained some aspect of the institution: the history of “the cage”, the rules behind solitary confinement, the workshop protocols, the mental health institution. (Tours run every 15 minutes, and it occurs to me it must get really old for these people to repeat these lines so often during the day.) 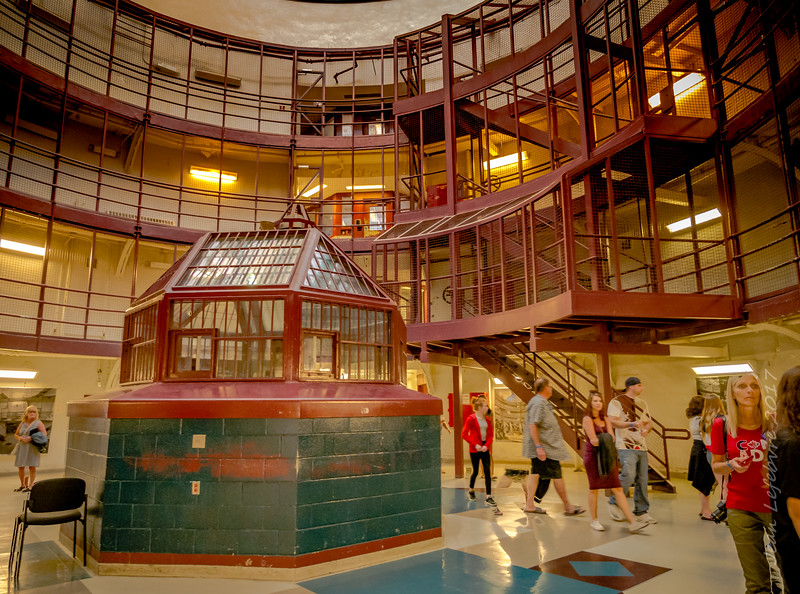 The Cage at the Pen

For security, these barred doors are no longer used in Canadian federal prisons 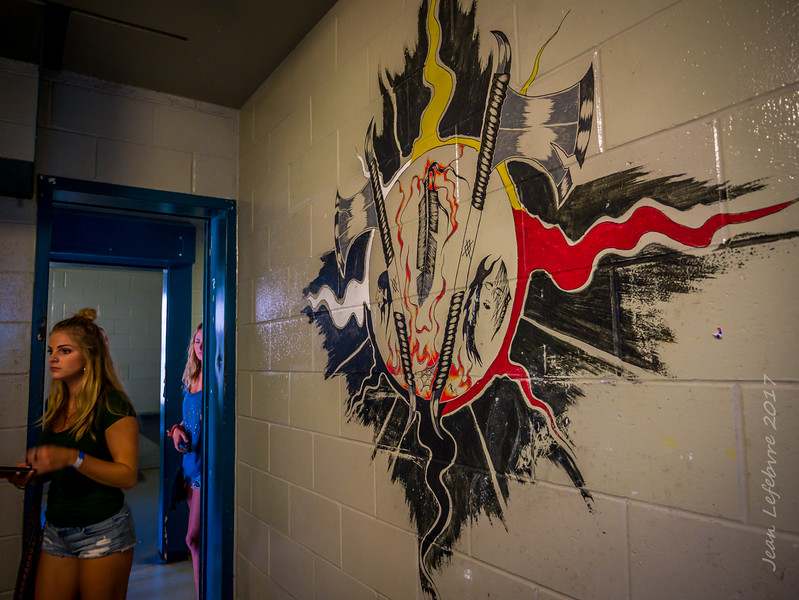 It was interesting, and while it didn’t make me want to go to prison, it was not that depressing—other than the solitary “yard”, which was really a sad, tiny, enclosed thing compared with the general yard.

There is also a penitentiary museum across the street, but we decided we’d had enough prison facts for one day.

On Friday we visited Bellevue House, where Sir John A. MacDonald, Canada’s first Prime Minister, lived for about a year. It’s considered a federal park, so was free to enter for Canada 150, but we decided to pay extra for a tour. I would recommend that; the guide (Harrison) was very good, and you get more out of your visit from what they tell you. 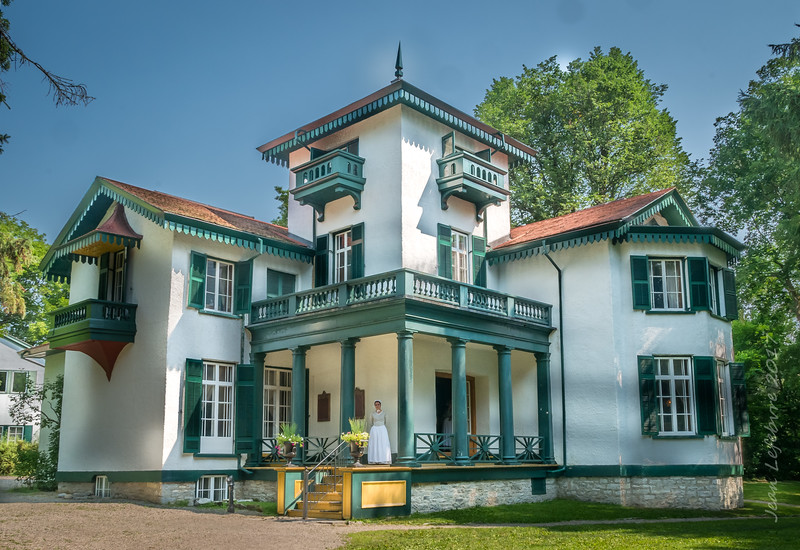 Bellevue (nice view) because it does have a river view, though a bit of a tree-obstructed one these days

We definitely learned quite a bit about Sir John A. and his times. He lived here with his sickly wife and two sons, one of whom died quite young. But they also covered what happened afterward with his political career—the good (Confederation, promoting votes for women) and the bad (residential schools, the Chinese head tax)—along with his personal life. For example, he did marry again after his first wife died, and they had a daughter who was encephalitic, but still an important part of Sir John A.’s life.

The master bedroom at Bellevue

They also have nice gardens on the grounds at Bellevue, where they grow food used at the museum, but also purchased by some local restaurants and donated to the food bank.

That left Fort Henry to explore, on Friday afternoon. We arrived in time for the cadet’s parade and firing of the cannon (which I guess is not so hard—they do this several times a day).

I found that suprisingly interesting to watch. The military formations are so graceful and musical. 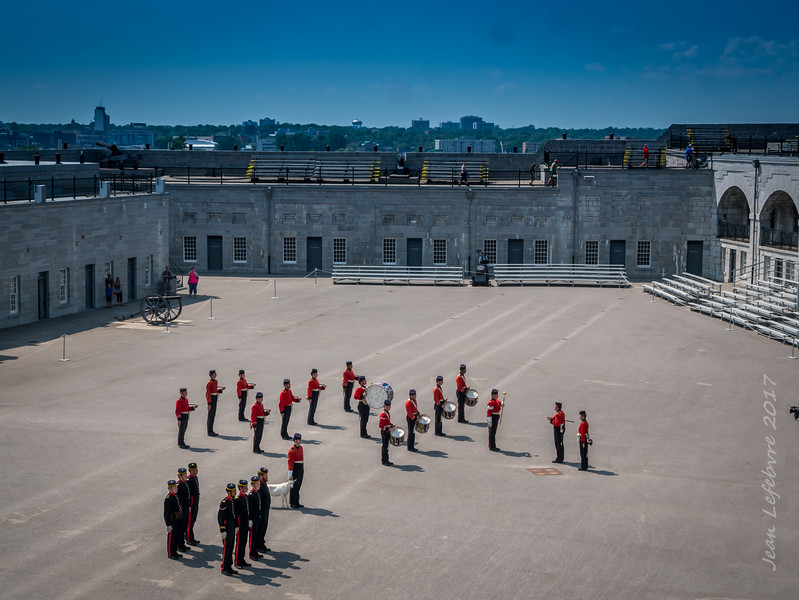 And the goat is not sacrificed to the gods of war

Here we did not go for the guided tour, though, but just looked through the exhibits and the interesting little shops on-site ourselves.

For its fairly modest population of about 130,000, Kingston has a great selection of restaurants. One of favourite meals here was at the venerable Chez Piggy, established by late musician  Zal Yanovsky. The room upstairs is very nice, the service was excellent, and we quite enjoyed the food. 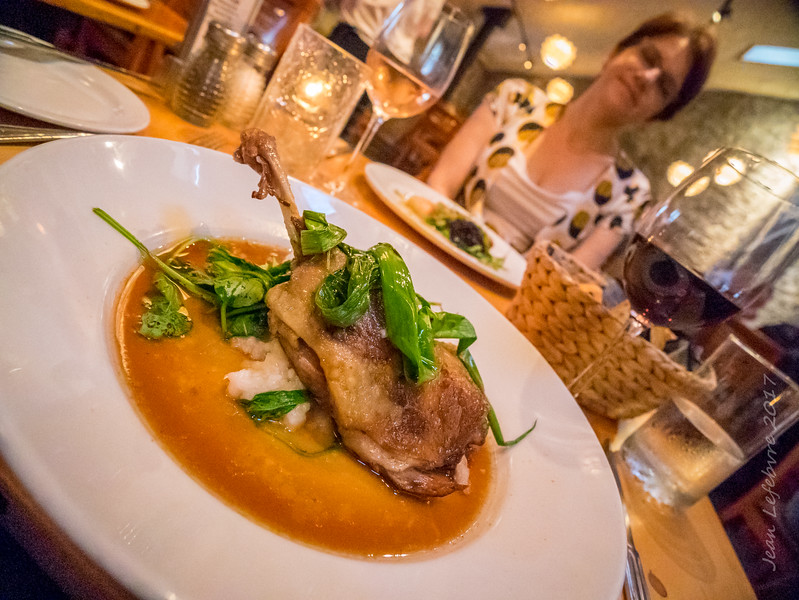 We also liked spin-off restaurant Pan Chancho, where we had lunch twice. It’s a coffee shop and bakery that also serves food (such as an excellent gazpacho).

But our next most-favourite was probably Tango Nuevo, a tapas wine bar that we tried out because it looked as though it would be good. (It’s not in Where to Eat in Canada.) Appearances were not deceiving: it’s a nice-looking place, service was great, and all six tapas we ordered were delightful. 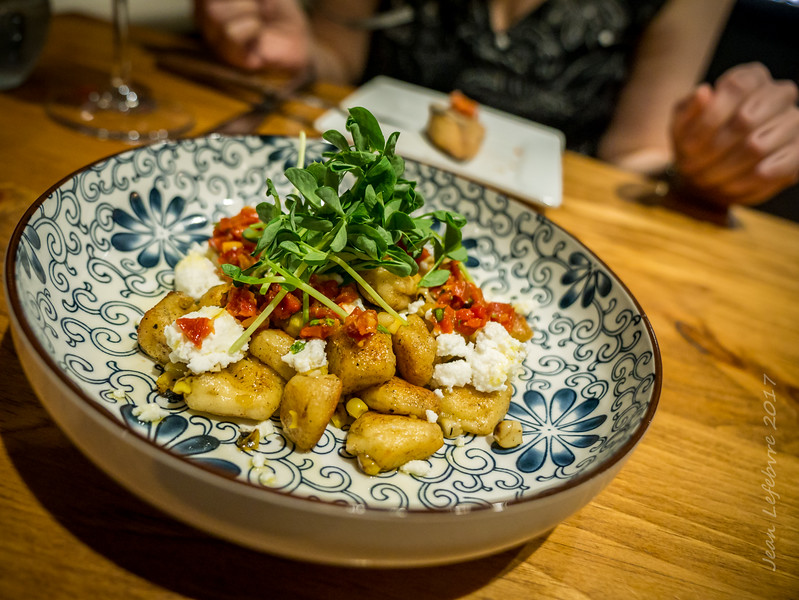 The gnocchi may have been the highlight

They also had an interesting (in a good way) Turkish dessert.

Aqua Terra aspires to be casual fine dining. It’s a lovely space, and gracious service (although the wine arrival timing is just a bit off), but the food isn’t quite up to “fine dining” standards. Not bad by any means, but not outstanding. 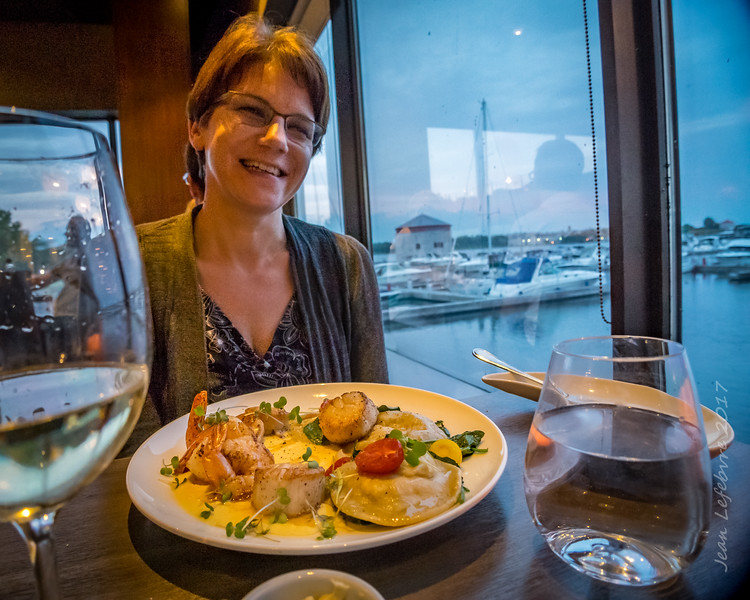 This seafood ravioli did not blow me away

And then there was Le Chien Noir. Lordy.

It’s billed as French bistro, but was a bit more raucous bar-y than we were expecting. What can you do. We were seated, given menus, and with some debate, we figured out what we wanted.

And then we waited. And waited. Like half an hour, and no one even took our drink order.

The waiter did apologize for the delay, but then seem completely flummoxed when Jean asked for wine suggestions for his food. “We don’t really do that,” said the waiter. What?

Jean just ordered the wines he’d been considering. Shortly after putting that in, the waiter came back and said they were out of the special Jean had ordered as his main. So Jean picked another, then said he’d reconsider his original wine choice after the appetizer.

We did get the wines we’d ordered for the appetizer of tuna tartar we planned to share. Then we waited. The waiter said the bread was just coming out of the oven. Then we waited. We eventually did get some bread, which was warm, but also noticed that the table next to us, which had arrived later, already had their appetizers. Hmm.

Finally some food arrived. It was our main courses! “We never got our appetizers,” I pointed out. The waiter apologized. “My fault,” he said. (Duh.) “Wines are on the house.”

Will say that the mains… Were really very good. And not only because we’d waited an hour and half for them. The duck cassoulet I had was very well prepared and with creative flavours. But man, the experience!

It wasn’t quite done. The next day I got an Open Table email asking me why I hadn’t shown up for my reservation at Le Chien Noir. They hadn’t properly checked us in on arrival. (This, too, was later sorted out.)