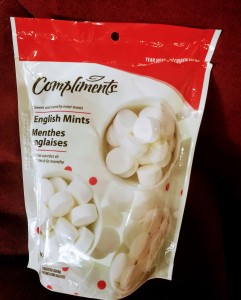 Jean: Why are you buying those?

Jean: But old people buy those.

Me: Why do you say that? Because my Dad buys them?

Jean: And my Grandmother. She always had a bowl of those out.

Me: Come to think of it, my Grandmother always had mints like these around, too.

(Or allow shoes on the couch?)

So the mission here was to get another pair of comfy shoes that weren’t sandals (as it seemed, at the time, that Fall weather was coming). And I did succeed at that:

But then I saw these other shoes, and they were so cute.

The truth is, outside of ballroom dancing—which requires special dance shoes—I have few opportunities to wear heeled shoes. At work I do the stand-up desk thing, and you can’t do that in heels.

But still…. Pretty cute. And on sale!

I have managed to wear them to one party that was mostly a sit-down affair, and have worn them at work as well, for the sit-down parts of the day. For heeled shoes, they’re pretty comfortable: despite the point, they don’t squish the toes, and the back strap doesn’t dig in. And with so few occasions to actually wear them, they should last for years, right?

Anyone want to borrow a T-shirt?

It’s possible I have a T-shirt problem.

The above were all acquired this summer, in Ottawa, Kingston, Toronto, and right here in Waterloo. And it’s not as though I didn’t have any T-shirts to start with.

We came home from one vacation to find that the drip coffeemaker was no longer working. A fuse or something, I guess—you’d press the button and nothing would happen. That was a Delonghi dual espresso / regular coffee maker that I’d received as a work gift. Only, the espresso part broke down within weeks. It looked impressive, but for years had supplied only regular coffee, and now couldn’t even do that.

Still, when we put it out with the trash, someone took it away within minutes. Good luck to them in trying to make it useful again.

Meanwhile, we were doing Bodum coffee, which is very good, but presented a timing issue. Jean is more of a morning person that I am. He’d get up and make enough coffee for both of us, but by the time I was up and ready to drink it, it was often more lukewarm than hot.

So when the New York Times ran an article on the best available coffee makers, I was interested. Especially in this one:

We started by tasting a single-origin coffee to determine which cheap machine was most acceptable to discerning coffee drinkers, then ran the panel a second time with preground Dunkin’ Donuts house blend from the corner store. The Hamilton Beach 12-Cup Coffee Maker (46201) swept both rounds of testing. It placed second to the Oxo [9-cup coffee maker, a $200 US coffee maker] in Round 1 and actually beat the Oxo during the Dunkin’ round.

That Hamilton Beach unit was more widely available in the US than in Canada, but Amazon could ship it to us from an outfit called Moto Liquidation that warned would be “like new” but “show signs of handling/unpacking and usages, boxes have damage.”

That proved pretty accurate—box was somewhat battered but unit looked new. Only the first day we tried it, we found that we only got about half the amount of coffee requested—the rest of the water spilled out all over the counter.

We contacted Moto Liqidation who said that we could either get a refund, or they would send us another coffeemaker. Either way, they said, we could keep the one we had. And hence:

Unit 2 has a slight wobble, but not one that interferes with coffee making. And if any of the parts ever break or fail, well, we can pillage them from unit 1.

It does make really good coffee.

TV in the kitchen

I believe it’s not so unusual now, but when we got our kitchen renovated 15 or so years ago, our designer considered it very odd that we wanted space for a TV in there. Still, she penciled one in, above the stove top, plenty big enough for TVs of the time.

Fast forward, and the space is just barely big enough for the smallest of today’s TVs. And there’s absolutely nowhere else in the kitchen a TV could go (short of doing another renovation).

Furthermore, at some point I decided I also wanted the option of listening to music in the kitchen, and I don’t mean over headphones. So we got a Sonos Play 5, with the idea that when we bought a small digital TV to replace the old tube one, we could hook it up as the TV speaker.

But the Sonos 5 is large, and trying to find a spot for it near the TV was a challenge. Not just in having enough room, but also in the fact that anything near the stove top gets totally coated in disgusting grease, and I didn’t want that to happen to my nice speaker.

Then Sonos came out with a new speaker that was exactly what we needed. The Playbase is a wide, flat TV (and music) speaker that the TV is meant to sit on. It’s sized to exactly fit in the limited space we have available. The sound quality, by all accounts, incredible. The only problem? It’s a pricey sucker.

[All Sonos Playbase reviews, summarized: Woah, that sounds awesome. … Wait, you want how much for it?]

So I kept dawdling on it til the the September long weekend, when I just decided to go for it.

The only available TV spot in the kitchen is… not wide, and at risk of grease

A better view of the Sonos playbase. The other little box is the Rogers digital adapter.

The new TV took two tries, as the first one had a cracked screen. Figuring out just how to get the cable through was trickier than expected (tip: even it’s a digital TV, you still need a digital adapter to decipher the channels).

But the Sonos was problem-free in hooking into our network of other Sonos units. And it does sound great. And having the Chromecast on the TV opens up new viewing and listening possibilities:  Netflix, YouTube, Spotify (even if not paying for Premium), SoundCloud app.

(The neighbourhood scavengers, by the way, had no interest in the tube TV beyond the power cord. But no worries, we properly e-cycled it.)

As for the grease, we’re trying to minimize its effects by using the back burners more. It’s making that back corner kind of gross, but so far so good on keeping the speaker clean.

So I was happy. Until the following Tuesday (i.e. the next business day) when Sonos decided it was time to offer me 15% off a new Playbase. As long as I hadn’t already bought one, of course…

Bah. Good thing I saved money with the on-sale shoes and the cheap coffee maker, eh?

2 thoughts on “Every purchase tells a story, don’t it”