Now that I’ve come up with it, the title of this post seem vaguely ominous, as though I’m about to recount some tragic event that, in four short days, changed my life forever.

But no, sorry, this is nothing that interesting, I’m afraid. (Mind you, I am glad I haven’t recently experienced a great tragedy.)

Jean’s work has been requiring more travel lately, including three weeks in Barrie (about a 2-hour drive away). The first weekend in between, he came home. The second one, he decided to go a conference in Toronto. I would join him there.

This conference is annual, and normally I just stay over for one, maybe two nights. But with us having seen less of each other, I went there Friday after work and took Monday off, such that we could spend three nights and (part of) four days together.

Due to heavy Toronto traffic, my Friday bus was late arriving. Meanwhile, Jean was dealing with the fact that he couldn’t get into his hotel room, because the hotel (Doubletree by Hilton) had mistakenly registered him as staying only one night, even though we had booked for four (and had the paperwork to prove it). Initially, they also weren’t sure where his luggage was. (Turned out it was still in the room.) That all got straightened out shortly before I arrived.

Originally we’d been planning to meet with my younger sister and her husband for dinner, but she’d contacted us a couple days before with the realization that her son had a basketball game and her husband would be out of town, so… We made other plans. Which was just as well, as with the bus delay and hotel troubles, we would have been late for dinner.

But we were on time for the alternative we booked, old reliable Ki, where we once again had a really nice meal of their “modern sushi”, with a bottle of Grüner Veltliner. 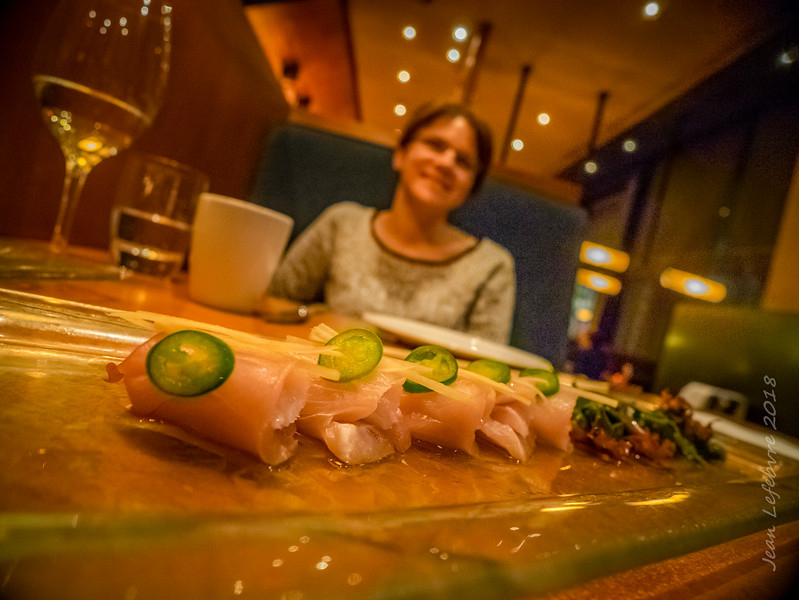 The jalapenos gave this a nice kick 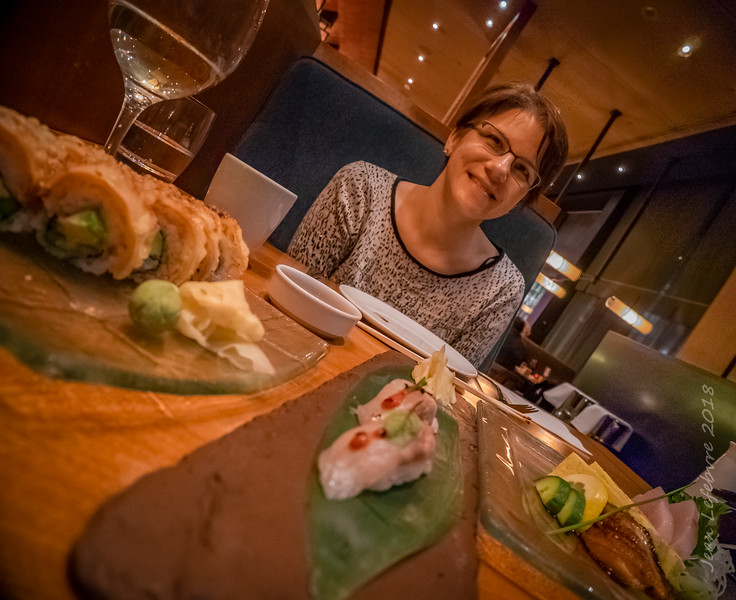 Saturday morning Jean had more conferencing, and we had an early dinner booking, so in the afternoon, we just did a bit of ambling about on Toronto streets…

Dinner was at the very popular Richmond Station, which we’d really enjoyed this past summer. Given its popularity, we were only able to get reservations at either 5:15 or 10 pm. We went with 5:15 pm. We were able to do the chef’s surprise menu, which made it easy. They were able to give us five courses before they needed the table again, and everything was lovely, from the raw oysters… 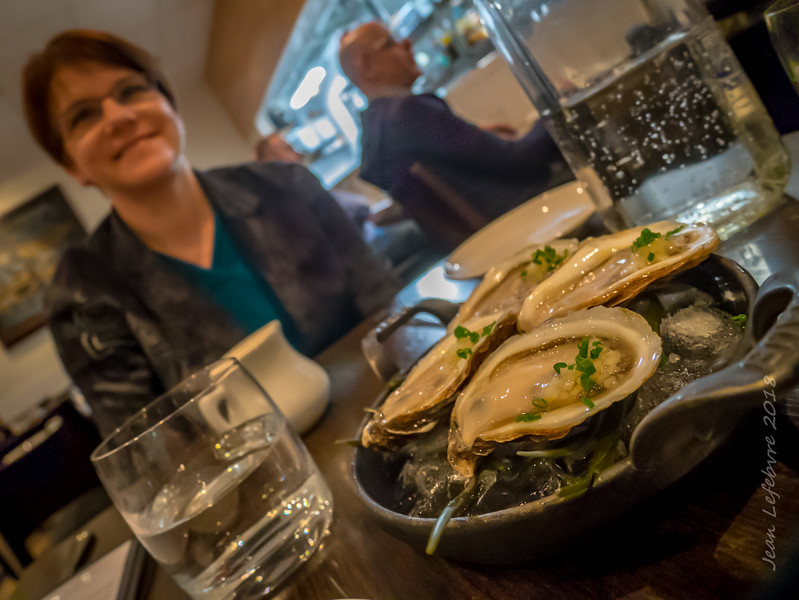 To the truffle mushroom soup, and on to the trout with cauliflower and barley…

to the beef main course, and the hazelnut ice cream dessert, and polished off with some chocolates and macaroons. 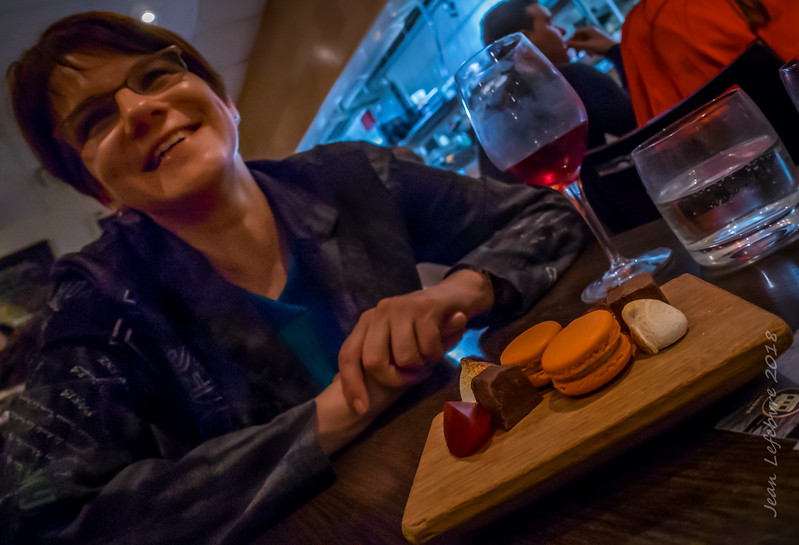 The wine we had was a French Pinot noir that was a pretty flexible match.

We were back at the hotel early enough to watch Eddie the Eagle on Netflix. Pretty much the definition of “feel good movie”, that one, but it’s well done. Eddie the Eagle was the British ski jumper at the Calgary Olympics who had taken up the sport only a year before, and came dead last in the competition, but was thrilled just to land on his feet (and, incidentally, set a British record for that sport). This movie was good at showing that this really was an accomplishment! Landing at Olympic ski jumping is not easy.

So, I’d recommend it. (Canadians, though, will have to look elsewhere than Netflix to watch it. They dropped it on February 1. Hence my hurry to watch it in January.)

Sunday late morning we met with my other sister at the Crown Princess for dim sum. Food and conversation were good, as usual.

Then we headed to the ROM, where they were featuring three special exhibits. Once we got through the rather long entry lineup, we went to the first one, on the Vikings. And found it somewhat underwhelming. Definitely I learned more about the Vikings, but that included the fact that they didn’t leave behind that many artifacts. I was expecting something more spectacular, I guess.

I was amused by Zuul’s tag line

The Wildlife Photography exhibit, on the other hand, was really great. Lots of fantastic photographs (none of which we could take photos of, of course). As for Christian Dior exhibit? Honestly, we didn’t go ub because of the lineups. Which is really unfortunate, because when we first got to the exhibit door, there was no lineup. Had we realized, we would have gone in then and looked at the Wildlife Photography afterwards. But we didn’t, and we didn’t.

Our dinner that night, with some friends, was at our first new (to us) restaurant, Pearl Diver. It was a little bit noisy, but friendly service and definitely good at preparing its signature cuisine, seafood. 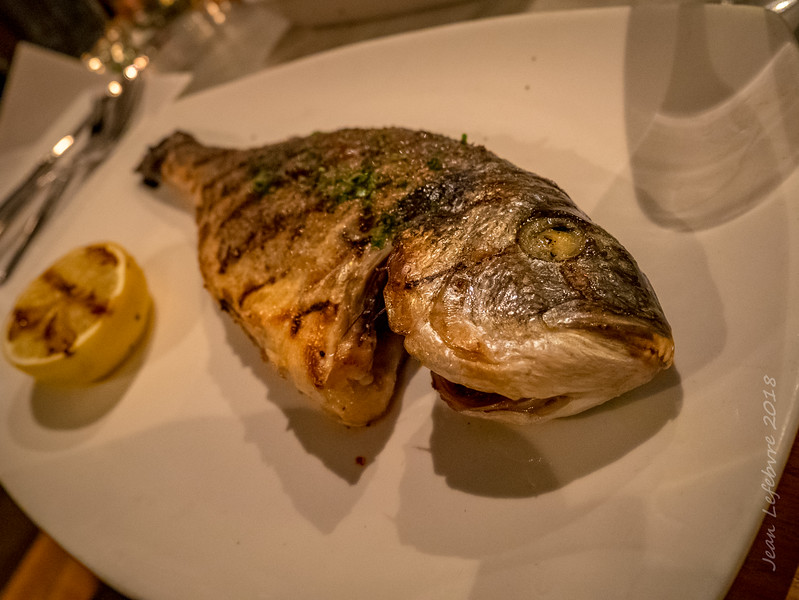 Jean’s meal was Spanish-style: No sides! But they weren’t all like that.

And snowy Monday was basically about getting ourselves on the road, back to our respective destination cities.