This is a movie about the making of a “so bad it’s good” movie, The Room. I’d never seen The Room, but I had heard of it, because it plays regularly at the local repertory cinema. Before going to The Disaster Artist, I listened to a How Did This Get Made? podcast that combined an older interview with Greg Sestero, a lead actor in The Room, and a new interview with James Franco, director and star of The Disaster Artist.

That did give me some insight, such that I, for example, understood faster why it was funny when Tommy Wiseau insisted on randomly throwing a football around with Greg Sestero. I don’t think that advance research is necessary to enjoy this film, though. That scene was funny regardless, thanks to Wiseau’s sheer incompetence at throwing the ball.

Indeed, overall, this movie was one of the funniest I’ve seen in a while—particularly the part where The Room is premiered to an incredulous, sold-out audience. But it’s an interesting story as well, because Wiseau is such a mysterious and eccentric character, and his friendship with all-American Greg is unexpected.

As for the acting, well, James Franco lost himself so much in the character of Tommy Wiseau that Jean didn’t even realize that’s who it was; he thought that James played the character of Greg (in fact played by James’ brother, Dave). And it’s chock full of cameos by the likes of Sharon Stone, Megan Mullally, Nathan Fielder, and Judd Apatow.

[At least some of the reports of James Franco’s “bad behavior” had come out just before I went to see this. Obviously, I concluded that I still wanted to go. Your mileage may vary.]

This would be the original 1982 Blade Runner, which I thought we should see before seeing Blade Runner 2049, given that Jean had never seen the original, and I had forgotten almost everything about it—other than it starred Harrison Ford and involved androids.

The version we watched was the “Final Cut”, so it lacked the explanatory voice-over and slightly extended ending of the original. Mid-way through, we were both a bit confused about what was going on. But the story does come together, and the movie as whole is thought-provoking and engaging and has a great look. Interesting that it’s set in 2019. We aren’t as far along as that with androids (I don’t think?), but we have much thinner monitors. (This world was still full of cathode ray tubes.)

What else clangs a bit with modern sensibilities? Jean and I were both taken aback at the “seduction” scene between Deckard and Rachael—because it’s actually a rape scene (albeit one that fades to black). She tries to run away from him. He physically stops her. He insists that she say she wants to be kissed. She never looks anything but frightened.

But I don’t think we’re supposed to read it as an assault, given that later in the movie, Rachael declares that she loves Deckard, and they leave together. Reminding me that Pretty in Pink sees nothing wrong in boys having sex with a passed-out drunk teenage girl, and that Grease has a disastrous message for women in general (“Did she put up a fight?”). How many movies of my youth contain similarly jarring scenes? On that topic, check out Maclean’s column  James Bond was a rapist.

I’m not a “Star Wars person,” and I’m a bit mystified by those who are, really. Still, I got curious about the low fan vs. critics ratings of this movie on Rotten Tomatoes—you’d expect that to be the opposite, if anything. But I also knew that a lot of “Star Wars people” liked this one very much.

I figured I should go see it for myself.

I liked the movie well enough, as did Jean. I was pleased that it did have its own plot, instead of borrowing storylines from the older films as The Force Awakens had. I liked that it bounced between three different stories for much of its run-time; preventing any one from getting too tedious. Having all those strong female characters was great. It was pretty long, but it kept me engaged. 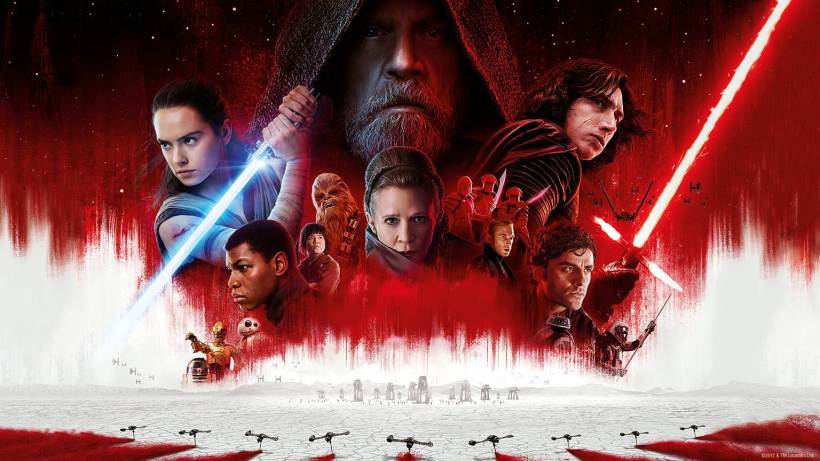 After seeing it, I did some reading on why some super-fans didn’t like it. Certainly for a minority it’s just a matter of sexism and racism (as in, ha ha ha, the men’s right activists who created a nonsensical “no women” edit). But for other critics, seems to me, they just cared too much. That is, they had preconceived notions of what this movie should be and couldn’t handle having those expectations thwarted. They wanted Luke to be a certain way (heroic!), they had their ideas of what was possible with the Force (no astral projection!), they wanted the plot to follow an expected arc (plans should work out!). The movie itself told them to move on from the past, and they didn’t like that.

Whereas I didn’t particular care what happened to Luke (sorry Luke), have no theories of the Force, and found it rather interesting that the plans didn’t work out! (Is the lesson here that you can enjoy the world more if you care less? Hmm.)

That movie is phenomenal on all counts.
Another thing we get is plans NOT WORKING OUT!!! AYYYYYY!! When the fuck do we ever get to see that happen! That was amazing! Shit always works out!

I would note that despite its 48% audience score on Rotten Tomatoes, The Last Jedi was a huge box office success.

Call Me by Your Name

We settled into our theatre seats. The lights lowered as the first of the upcoming attractions was queued up.

“Hey,” Jean whispered to me. “What movie are we seeing?”

Truthfully, I wasn’t sure this would be Jean’s kind of movie. The issue wasn’t that it’s a gay love story. It’s that it’s not much more than that. It’s a slow-paced, character-driven exploration of growing attraction over one summer, between 17-year-old European Elio and the handsome American doctoral student, Oliver, who travels over to work as a intern for Elio’s father. The kind of movie Jeanoften finds boring.

To both our surprises, he didn’t hate this one—though “it was deadly slow,” as he pointed out.

(I personally would have described it more as “languid”.)

But the issues raised by the relationship kept it interesting, and led to quite a discussion afterward. Like the young woman that Elio starts a relationship with as a distraction from the one he really wants. The movie really lets us off the hook in feeling bad for her, with her sincere expression that she’s fine and that she and Elio will always be friends. Big of her!

Then there’s the age difference. The movie is fuzzy on exactly what that is—Jean guessed that Oliver was 30 (accurate to the actor’s age), but according to the novel it’s based on, the character was 24. At any rate, one’s a teenager, one’s a man. “What if that had been a 17-year-old girl?” asked Jean.

That feels like a bit of a straw man argument, as a movie about a 17-year-old girl and handsome older man would be another movie entirely, one telling a completely different story. The whole point of Call Me by Your Name is that the relationship is not socially sanctioned (it’s set in 1983). That informs everything about it.

And for my part, I felt fine about the relationship, as it was so clearly consensual, and initiated, really, by Elio and not Oliver. It’s a lovely movie, one with a twist at the end that I didn’t see coming, and indeed didn’t really understand until I reflected on it a bit later.

While you can’t count on every Pixar movie being a classic anymore, it’s nice to know that they can still put out great films, as with Coco. I really liked the Mexican concept of the afterlife—one I hadn’t known anything about, going on. And as Jean said, this movie “had a really good message” about the importance of family over personal ambition, about the power of forgiveness. And it looked amazing! Well worth seeing on a big screen.

The Third Man is a classic film from 1949, but Jean and I had never seen it. Turns out it’s one of those that does hold up. It helps that it’s set in a particular time and place, post-World War II Vienna. And also that the moral issues it grapples haven’t gone stale. But mostly that it’s an engaging story about an American writer whose convinced there’s more to his friend Harry’s death than he’s being told. He’s not wrong…