With The Berlin having changed to a tavern format, we weren’t sure where to go for New Year’s Eve dinner this year. We strongly considered The Bruce in Stratford, which had a dinner, dance, and room option, but that would have been rather pricey—they charged more than usual for rooms that night—and likely not worth it giving that Jean had to work til 5 on the Eve and had to plans to canoe the morning of New Year’s day.

We then considered Swine and Vine, but weren’t entirely bowled over by the set menu. We’d earlier in the year been a little underwhelmed by Loloan Lobby Bar, but a friend who’d been more recently had been very impressed. They were offering a 9-course menu. We decided to go with that.

As per tradition, to get there we took Grand River Transit up on their offer of free transportation, despite it being a miserably rainy evening. We had one connection, which worked out well, and arrived slightly early (as the route planner predicted), which wasn’t a problem for getting seated. Unsurprisingly, given that Loloan’s dining area isn’t all that big, they were sold out for the evening.

If I recall correctly, the amuse featured cucumber and papaya with various flavorings. I do know that it was an auspicious start.

The wine arrived next, in rather generous 3 oz servings. Chardonnay can be tricky, but this was a really lovely, unoaked one. We weren’t completely sure what it was meant to match, but it was indeed both of the next items, the lobster and the goose.

We always get a bit skeptical of lobster in our far-from-the-sea location, but I’m not sure why, since lobster is usually cooked from live? At an rate, the lobster was very good, and this was a lovely combination of flavors. 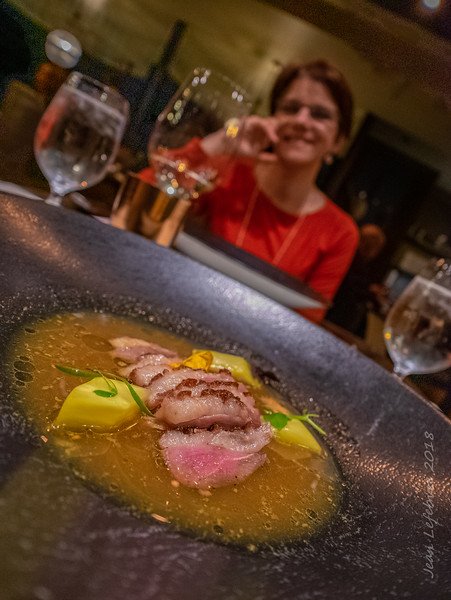 The goose, though, was possibly the highlight of the evening. It kind of tasted like duck. Unusually delicious duck (and duck is usually pretty delicious). The broth was salty, but not too salty.

2015 was a warm year in Oregon (we found out from the sommelier), so the Pinot Noir was fruitier and fuller than they often are. Quite lovely. 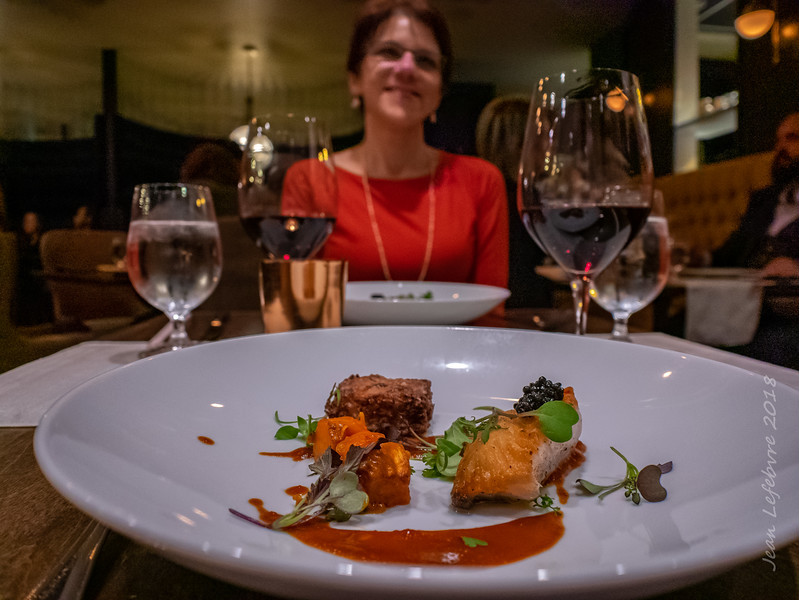 The main course serving sizes were quite modest, as you can see, making it entirely possible to get through nine courses without feeling stuffed. The sablefish was nicely cooked, very moist. The croquettes were a highlight.

The Cabernet Sauvignon was of course a fuller wine. It was a great example of the style, but it’s not our favourite style, so we actually didn’t finish these glasses.

We also aren’t big beef people, but this rib dish was also nice, and we did finish that.

No photo of the croquembouche, but they were little balls of light pastry with the listed fillings, which was fun.

The “boytritis semillon” is less-appealing sounding name for the same grape and process that French Sauternes wine go through. So this was a pleasant, complex sweet wine, but it would have benefited from more aging.

The cheese course included three types of cheese, along with naan, honey, and other accompaniments. I can’t remember the details, four glasses of wine in, but it was a creative and tasty assortment. 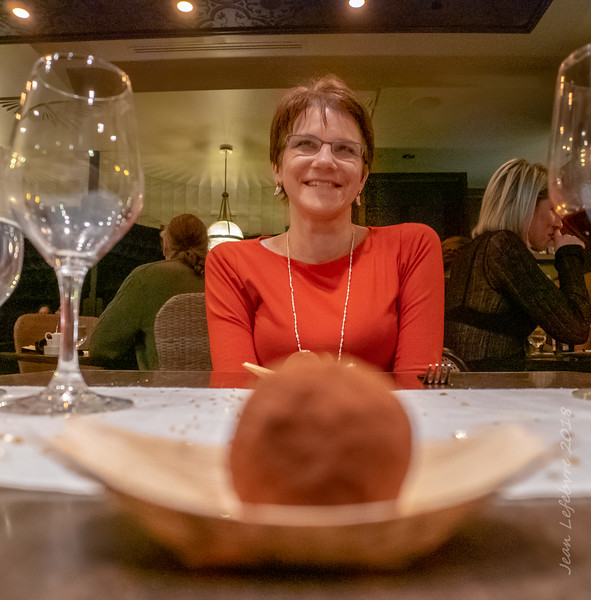 The chocolate was single, house-made truffle each.

So yes, each course was a hit, and the wines were very enjoyable. (Should mention that matching wines were a choice, and that they could have been done with just a choice of three instead of four. Which appears might have been smart for us.) Service was excellent throughout, also. It wasn’t a cheap night out, but it might have been worth it.