More on this later, but we’re back from a vacation that was a success, particularly from a culinary perspective. From tiny Picton (population 5000) to romantic Québec City to Canada’s capital of Ottawa, we had no bad dinners and at least four outstanding ones.

Back at home, I’m feeling a little deprived on that front. Now, I can feel my friends from Northern Ontario rolling their eyes at that comment, and will admit that we do have places where you can get a well-prepared meal (like Solé, Janet Lynn’s Bistro, Gilt, Belmont Bistro, TWH Social, and so on. And if you’re willing to drop the big bucks, Langdon Hall.)

But ever since Verses closed, it’s just been a challenge finding that One Wonderful Place where the food is always amazing and everybody knows your name. Marisol came closest for a while, but then that closed. And The Berlin’s been closest of late, but guess what? They’re closing May 15, and reopening two weeks later under a new name and new menu: a tavern replacing the fine dining. Sigh.

Anyway. This is all to explain why were so excited to hear about the new Loloan Lobby Bar restaurant. This is a second venture by the owner of Bhima’s Warung, another of Waterloo’s better restaurants. Since we heard about it, me and my friends have been anticipating it: When will it open? How will it be?

Earlier in April, after it had been open about a month, we went to find out.

Situated in the lobby of a condo building, it’s a lovely room, half of it devoted to bar space, the other to a sit-down restaurant. Service was attentive and eager to explain the menu, which featured some unusual ingredients. Food was served with a certain amount of ceremony: 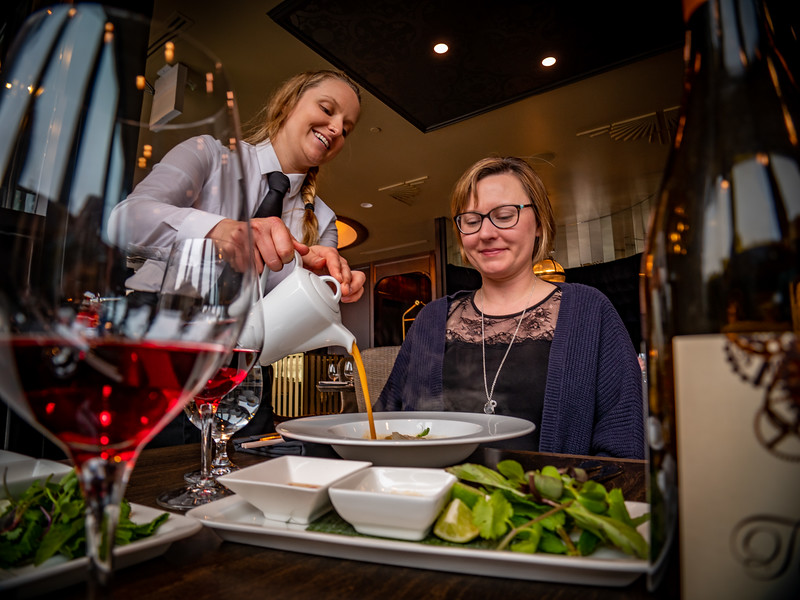 Pouring out the lobster bisque

That was all very nice. And the food? Well, it was fine. Nothing really special, but fine. The only problem with that being, it was priced at a level that you’d expect something more than just fine. It should have been special.

Altbough… Dinner did end on a high note. We ordered the petit fours assortment for dessert, and those were actually… Really amazing. Along with the delicious (decaf) French press coffee, served with timer to ensure I didn’t drink it too soon.

All these little desserts were excellent

So, you can at least count on a lovely coffee and dessert experience here. It will have to do as I continue my quest.

One thought on “Loloan-ing for a dining experience”