Been a bit quiet on my blogging front lately, but not for any major reason. Just that things have been a bit off—just off enough to prevent me from focusing on a blog post.

Not mine, of course—Jean’s. He was away for two weeks in the northwest Ontario wilderness. No wifi. No cell service. Just a brief, one-way, satellite-delivered daily message giving location and brief status update. 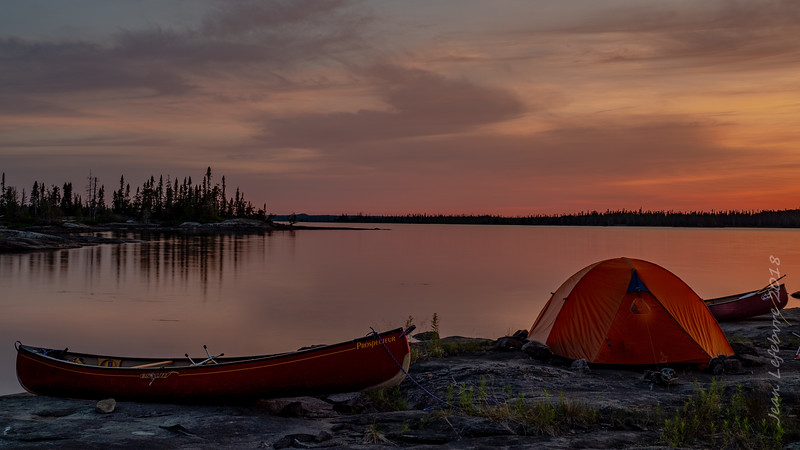 Away from it all at Wabakimi Park

By a combination of organization and happenstance, I had enough activities booked at that time to keep me busy and stave off loneliness: barbecue with dance friends, dinner and lunch with other friends, an outing to Stratford with my sister and brother-in-law to see To Kill a Mockingbird, blood donation appointment, Canada Day fireworks, even an unusual number of meetings at work, including some over lunch and dinner.

But it was still all out of the ordinary: Jean being not only away but basically out of touch (I think “out of touch” is just harder to deal with in these days, when we expect everyone to always be in cell range), combined with so many other social activities.

I wonder if I’ve been changed in the night. Let me think. Was I the same when I got up this morning? I almost think I can remember feeling a little different. But if I’m not the same, the next question is ‘Who in the world am I?’ Ah, that’s the great puzzle!

Another activity during canoe trip time was cleaning out the main bathroom and master bedroom, in preparation for these rooms getting renovated. This involved going through piles of stuff and resulted, in a time, in these rooms looking cleaner than they had in years. A good thing, albeit with the side effect of making even my bedroom looking slightly strange, which was vaguely off-putting.

Buffy: But it seemed perfectly normal.
Xander: But disturbing, and not the natural order of things and do you think it’ll happen again?

— Buffy the Vampire Slayer, Once More with Feeling

When Jean got back, we moved the big pieces out of the rooms. This proved somewhat easier than we’d feared (most items could be broken down into smaller, lighter pieces), and also put an end to parts of the house looking neater, as we had to find space for everything in the remaining rooms. We tried piling the mattress on top of the guest bed mattress, but that made the bed we had to sleep in comically tall, so instead we propped the mattress up against the wall, making the already cramped guest room considerably more cramped. Our second bathroom is, similarly, hopeless cluttered with items from the main bathroom.

The first day of renovation is what they call the “tear down,” when they take out all the old stuff to make way for the new. Here’s the before and after: 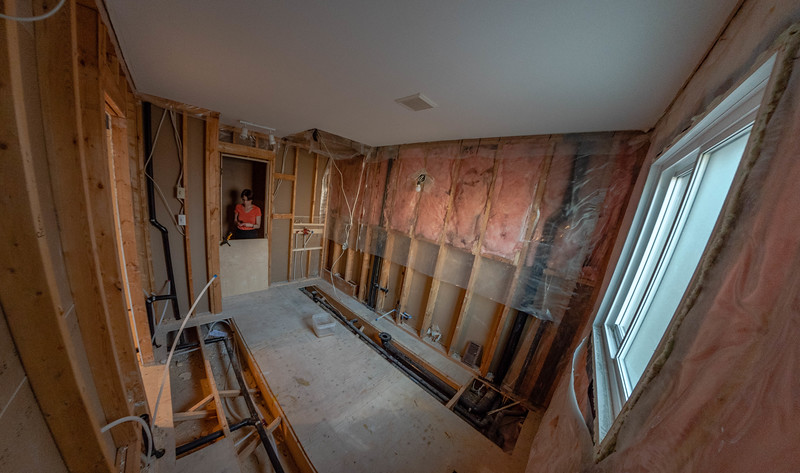 So if I thought the house felt a bit alien before…

Since we had tickets to Rocky Horror Show on a Thursday of that first renovation week (of a total four or five, they predict), I figured why not stay on and make a long weekend of it. Jean wasn’t able to get time off right after that long canoe trip, but that just meant a slightly commute for him back to work Friday while I explored Stratford.

Really, in the scheme of things, it was the most normal I’d felt in weeks.

Me with my people

One of the dinners out in KW was at King Street Trio, which I hadn’t been to in years. It was a pleasant surprise. For one thing, it’s a nice quiet place, and those are increasingly hard to come by. For another, importantly, the food was quite good.

And while you might wonder a bit at the pricing, note that they offer 30% / 20% / 10% discounts on Monday, Tuesday, and Wednesday, respectively. We were there on a Tuesday, so that worked out well for us! Apart from our waitress being in a bit of a hurry for us to order drinks before the group had arrived, it was a good night out, and I’d go again.

Friday night, Jean and I decided to book a fancier dinner in Stratford for our pending anniversary next week, namely at The Prune dining room. It has to be said that the service on arrival was a bit chaotic. They initially forgot to give us menus… It took ages, and a few repeated requests, to get water… Our matching wines didn’t always make it out before the food it was to match… And while it’s true we arrived at the time they would have been trying to get a bunch of tables finished in time for the 8:00 theatre, that should be something any Stratford restaurant learns to get a handle on. And The Prune isn’t new.

Still, they did such a good job with the food, and the wine matching, that we just couldn’t stay mad. (We never really got that angry, to be clear.) Talented chefs, my friends! Particularly with vegetables. Never had such fresh and light pea and ham soup. The smoked tuna with tomatoes and olive was astonishing. The chicken overshadowed by the creamy mashed potatoes and intense morels. Cheese tortellini similar outdone by the spring vegetable ragout it came in.

Jean with his cheese plate finale (and new beard)

After Stratford, on Saturday, we headed off Goderich way to spend some more time touring before heading home. On the way, Jean recalled that someone had recommended a winery in these parts, so near Seaforth, we visited Maelstrom Winery.

We looked super eager, because we were there right at the crack of 11:00, when they opened. That meant we got the full attention as the only patrons. We talked to the wine maker about his trials and tribulations in getting the winery going. Being new, they’re still in the experimental phase, but we did find some wines we quite liked: A smooth vidal, a refreshing frontenac blanc, and a really nice blend of cabernet franc and baco noir. They also have this wine called the abyss which is a blend of five varietals, resulting in a truly unique taste.

While cleaning out rooms, I did watch the much-discussed Nanette Netflix special. (If you haven’t heard about it, here’s a New York Times round-up of its many positive reviews.) I  would recommend it, as long as you know not to expect a barrel of laughs here. (There are laughs, just not a barrel of them.)

But I was struck by how many people said they’d never heard of Hannah Gadsby, which means that they’ve never watched Please Like Me on Netflix. A series whose four (short) seasons I recently polished off.

A scene from one of my favorite episodes of Please Like Me, in which Josh and his parents have a multi-course menu surprise at a fancy restaurant

I don’t know if that the show is everyone’s cup of tea? It’s basically an Australian comedy about a group of friends in their early 20s. It’s just that it also regularly, and honestly, deals with some heavy issues, notably mental illness (but also abortion, homophobia, STDs). So it too, definitely has laughs. Just not always a barrel of them. I grew quite fond of the characters, though.

The two plays I’ve seen so far this season—To Kill a Mockingbird and Richard O’Brien’s Rocky Horror Show—have both been extended, so I clearly went with the popular picks. Both are indeed very good. To Kill a Mockingbird is framed by having the adult Scout look back on her childhood from the vantage point of the 60s civil rights movement, and that works well. The child actors are terrific and the story remains affecting (bring the kleenex!).

Rocky Horror, on the other hand, is presented as pure fun. This is actually the third live production of this I’ve seen, and of course—given that the other two were amateur productions—this had the best singers (incredible voices), the most inventive choreography (it’s the Time Warp—but updated!), and fantastic costumes: particularly flattering to fine male forms on display, I have to say.

But for all that, I don’t know that I enjoyed this more than those productions—I’d just say equally. This thing just really works live. So if you haven’t yet experienced it, Stratford is a good place to start.

My Friday afternoon matinee performance at Stratford was not a play, though, but a perform by Steven Page (formerly of The Barenaked Ladies) and the Art of Time, doing a series of songs by the likes of Leonard Cohen, The Beatles, Gord Downie, Jane Siberry, Elvis Costello, David Bowie, and yes, The Barenaked Ladies…

The Art of Time uses contemporary composers to arrange pop songs for piano, violin, saxophone, bass, guitar, and cello. I generally love the results. I was in the fifth row for this show, and the set list was right up my alley. Steven Page is interesting in how he can be so funny in his banter, and some of his performances, but also be “you can hear a pin drop” serious in conveying the angst of songs like Elvis Costello’s “I Want You”. The ensemble will be doing a number of shows in this, their tenth anniversary year, so you might to check that out.

They also did this one at Stratford: “Entourage” by Steven Page.