Not a particularly significant birthday this year, so I wasn’t thinking too much about it. However, some months ago, when looking to pick a date to go see Sting’s The Last Ship in Toronto, I figured why not pick my birthday weekend.

Then events got built around that. I took the Friday off (to do a whole lot of nothing special—but still better than a work day). And I noticed that the KW Comedy Festival was having their opening gala the Thursday night before, so I got tickets.

I don’t think it was as strong as last year. My favorite act of the first half was Arthur Simeon, originally from Uganda but now living in Toronto. In the second half it was Emily Galati, the only woman featured, along with the headliner, Sean Majunder. The rest of the comedians were a bunch of white guys. And to be fair, one of them, host Derek Seguin, provided the evening’s most hilarious bit, in his description of the challenges of man-scaping.

But overall, it was some absurdist comedy, which is not really my thing, and a lot of jokes about their kids, or about why they don’t have kids—maybe one of the few safe subjects for white guys to joke about these days? But not as effective, for me, as Simeon, Galati, and Majunder’s takes on politics, social media, racism, and sexism. Tricky time to be funny, I guess, but the event would have benefited from more diversity than it had.

When we booked our bus to Toronto, we discovered that the Greyhound schedule isn’t as good as it used to be. Not as many buses, and they all have more stops. (This is just annoying. It’s not as though the train service is any better on Saturdays.) There was one bus that would have gotten us there around 10:50, which would have been ideal, but it would have taken three hours. So we went with the one that scheduled to arrive around 11:30, because it was only supposed to take two hours.

I didn’t think the forecasted 2 cm of snow would really affect it, but I was wrong. For one, I think it was somewhat more snow than that. Regardless, it slowed down all the traffic. We clearly weren’t going to make our 12:15 lunch reservation, so I texted my sister about that, and suggested that she could order for us, and we’d aim to arrive by 1:00.

Off the bus, we had trouble finding a cab, so we called an Uber, and initially had trouble finding them, too, but we did connect. Only to find that they had the wrong Holiday Inn listed as the destination, which I needed to change in the app. Which was not as easy to do as one would hope. By the time I finally got it to work (Jean’s suggestion to turn off wifi was key), we were there!

Fortunately, hotel check-in went smoothly, and calling a second Uber to take us to lunch was drama-free. We ate the O&B Canteen at the TIFF Bell Lightbox. A bit pricey for what you got ($19 for a burger?), but everything was very good.

I didn’t know a whole lot about The Last Ship other than that Sting wrote the music (it was not one of those musicals built around an artist’s famous songs), inspired by the ship building heritage of his home town. But it was really good! Strong cast, great singers, and a very moving story. In the first half, I was kind of with the capitalists (“Be realistic! The ship building industry is dying!”) and identifying with the characters who felt they just had to leave the town to secure their futures elsewhere. But by the end of the second half, I was totally with the workers.

We had an hour after the play before our dinner reservation, which gave us time to walk back to the hotel, and stay there briefly before walking to dinner at Buca Yorkville.

That was a fine meal. We started with three kinds of house-cured fish, which were small taste sensations. We added in a nice rosemary foccacia that was served with the most amazing olive oil. As a main, I had chestnut-stuffed ravioli with porcini, that was just fantastic, and a side of Swiss chard.

Jean had the day’s special of uni spaghetti, also good, but not quite as good as the ravioli.

The wine with that was the waiter’s suggestion of an Italian Riesling, which did work well.

For dessert, Jean went with the waiter’s suggestion of the affogato using decaf espresso, and it really was delicious (they make their own ice cream). I also enjoyed the cranberry millefeuilles that I had. 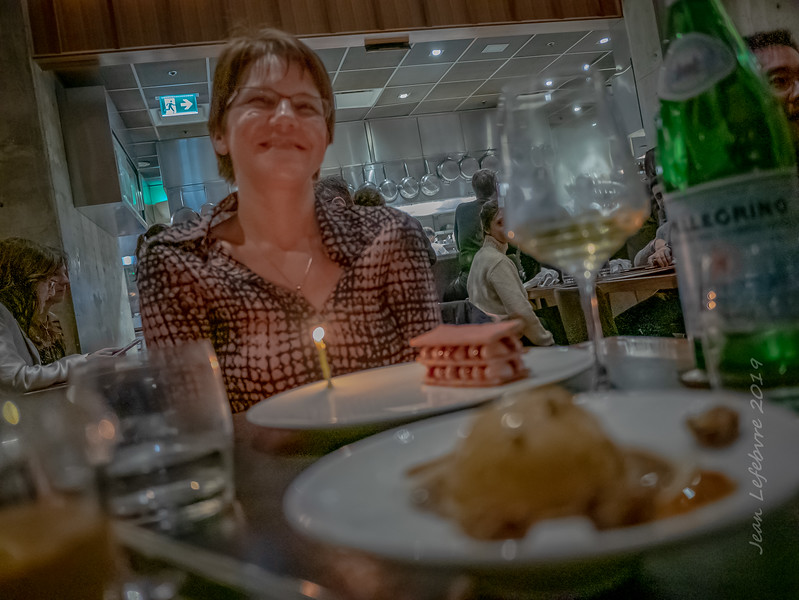 Apart from the candle on the dessert plate, as my birthday bonus I got a takeout of fresh pasta with little containers of olive oil and pepper and little containers of cheese. And instructions on how to cook this into a meal for two. This I did this past Thursday, and it was very nice.

The whole experience somewhat reminded of New York dining: Impeccable service, fantastic food, but no dawdling. One course arrived promptly after another, and we were done by 8:00. Probably because they needed the table for someone else.

Lazing on a Sunday afternoon

After that rather packed Saturday, it was nice not to have anything planned ahead for Sunday, other than our bus back. We had breakfast at Cora, and decided it was better than the Cora we’d tried previously (forget where, but not the one in KW). We then decided to visit the ROM, as they were featuring this year’s winners of the Wildlife Photography contest. That exhibit was terrific, again. The work to get some of those shots!

We then visited the “Treasures of the Earth” exhibit, that I don’t recall having been to before. It featured some beautiful minerals, gems, meteorites, and rocks, and had a section on Canadian mining, in which my home town featured prominently.

Since Richmond Station is very difficult to get dinner reservations at, but recently started opening Sundays, we thought we’d try to just go there and see if we could get in for a late lunch. It worked! We got a table.

To start, with shared the duck liver pate—creamy and rich. Then I had the lamb forestiere cavatelli, while Jean had duck two ways. We had a half-glass of sparkling to start with that, then a glass of red each. We were left too full for dessert. 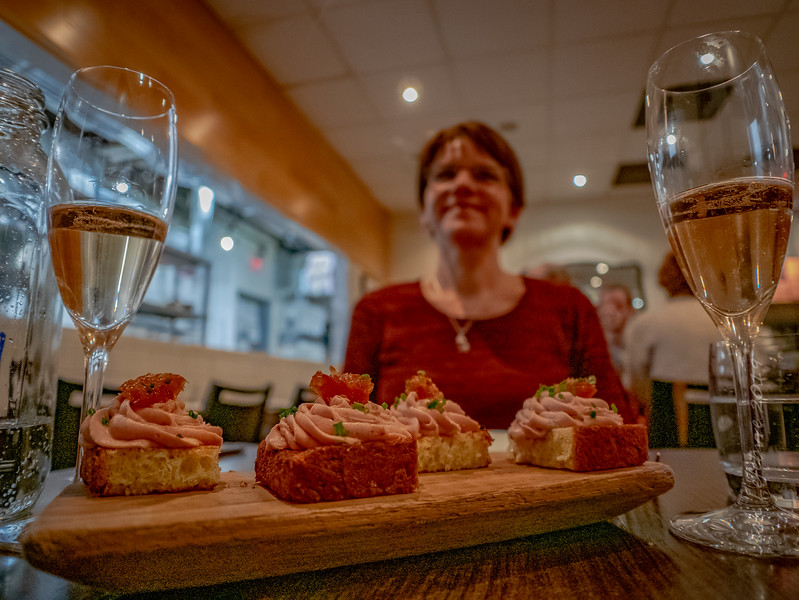 All that was left was to gather our luggage back at the hotel, then get to the station. There was a bit of Uber drama here too, that I won’t get into. But we made it to the station in plenty of time, and that bus was not delayed.

One thought on “52 candles”